Mitch McGovern has all the tools to prove doubters wrong

It's the biggest battle of the M&Ms Carlton has seen since the club wore the infamous light blue jumper to promote confectionary in 1997.

This week Carlton great Mark Maclure described current forward Mitch McGovern as a "flash-in-the-pan guy" who needed to become more competitive to warrant a spot in the team. 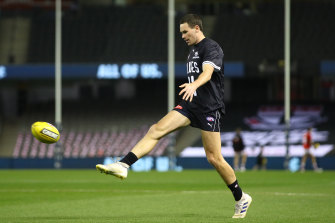 Mitch McGovern of the Blues has copped some criticism for failing to live up to high expectations.Credit:Getty Images

The criticism provided another chapter in the torrid ride the understated McGovern has been on since it became clear he wanted out of Adelaide midway through 2018, just months after signing a three-year deal with the Crows.

He has been on camps to gain a mental edge, in cages to rebuild his fitness, signed controversial contracts and now he's facing questions about his competitiveness.

It's fair to say McGovern has not been far from the headlines, a remarkable feat for a reserved West Australian with a relatively unremarkable 69-game career behind him.

McGovern's coach David Teague, who saw the best of McGovern when he was forwards coach at Adelaide, was forced again to defend the 25-year-old on Friday saying that despite his low possession rate he plays an important role in the team.

When coaches say a player's role is important that's often code for he's not doing much, but in McGovern's case the Blues are a little mystified as to why the big-name recruit became such a lightning rod for criticism this week.

Only one game earlier, in Carlton's round-four win over arch-rivals Essendon, McGovern earned a coaches' vote for his two-goal performance that helped the Blues to a narrow win over the Bombers.

They appreciate his performance against the Saints was, like many of his teammates', well below par but felt he was building into form in rounds three and four when he kicked two important goals against Geelong and was vital in their win over the Bombers.

"I know people can get seduced by numbers and stats – he’s not a high-possession player but he plays an important role for us," Teague said.

"He’s continuing to learn and he’s got growth areas, as have every one of our players."

There is truth to both sides of the argument because McGovern excels in aspects of the game that aren't immediately obvious but he fails in areas everyone understands, with his competitiveness sometimes below standard when the ball is in his area.

Averaging fewer than eight possessions per game as he has in 2020 is not enough for a mobile forward who came to the club as a high-priced acquisition.

To have the impact required McGovern needs to complete the work he starts when the ball is in his vicinity. It can leave the clutches of No.11 too easily, lending validity to Maclure's crack about the forward's steeliness.

Teague loves McGovern's positioning and movement within the forward-line, which sets up opportunities for others in the forward 50 however, viewing him as a very smart footballer.

The Blues think Levi Casboult's sticky hands aren't the only reason they lead the competition for marks inside 50, with McGovern's running creating the necessary space for others to mark near goal.

Sometimes that hard running and defensive intent puts McGovern out of position. Improving his running patterns to keep him in the play more is one of the areas he can improve. But that requires guidance rather than a rocket from the Blues' perspective because they don't have an issue with his work rate.

The Blues definitely want him more involved in the action so he can win more of the ball because as he showed with his booming goal early in the game against Geelong he can hit the ball with his foot as sweetly as any M&M hits the tongue.

McGovern has his faults; his lack of concentration when he last played at Metricon cost the Blues a match, when he didn't guard the goal line as vigorously as he might have, as the Suns snapped an improbable goal to pull off an upset win. It was not a great start to his time at the Blues.

But he also has, as Teague said, plenty of scope for improvement, his sticky hands and accurate kicking assets that need to be seen more often than his career average of 10.23 disposals a game.

McGovern has the ability. The coach trusts him. Now he has to deliver.

Borussia Dortmund can rent Reinier from Real Madrid
Loko fans about support at matches: we Consider it a mistake to remain silent about disagreeing with the management's policy
Ex-Sunderland midfielder Cattermole has finished his career. He did not leave the club even after relegation to the 3rd division
Xavi: Racism, sexism and other forms of discrimination must be eradicated by stopping games
Javier Mascherano: Messi is the main reason why Barcelona can beat any team
Barcelona is looking for a new coach. Pochettino, Koeman, Xavi are among the candidates (ESPN)
I just want to show you my dog. Klopp's cute video call to the Liverpool newcomer
Source https://www.theage.com.au/sport/afl/mitch-mcgovern-has-all-the-tools-to-prove-doubters-wrong-20200711-p55b41.html?ref=rss&utm_medium=rss&utm_source=rss_feed