His leadership in the mental health field has received widespread praise but Greg Inglis wouldn’t be relaunching his career if he hadn’t worked hard on establishing a ‘‘modern family’’ unit, which is as impressive as the work he has done on himself.

"I am a better person for myself, [partner] Alyse and [former wife] Sally and the kids," Inglis said about his stints in rehab. "I'm proud of that. I didn't let anyone in for a long time and now I feel like I can." 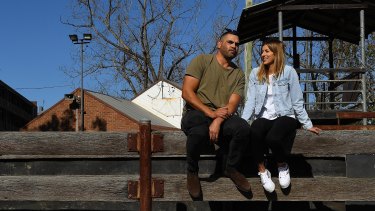 Today we can tell you the most delicate part of his comeback had nothing to do with the deal he struck with Warrington in the UK Super League, which will launch one of the great career rebirths.

"Greg called me a month ago and said 'I've got something really serious to talk to you about'," said Sally, the mother of his children, Nate, 5, and Quinn, 3. "I thought, 'Oh no, what’s wrong?’. But he told me about the opportunity in England and said, 'I won't go if you don’t think I should as I'll be away from the kids'. I didn't hesitate and told him he had to go if he had the love of the game back. It was now or never.

"We have worked hard and we have the kids' interest at heart. I'm happy he is happy with Alyse and I'm happy when the kids are with him. I know how much she loves my kids and I'd prefer that she is with them with Greg because they love being with her and him. I know it's a real modern family set-up but it works, and look how happy Greg is."

Alyse Caccamo has been by Greg's side through some tough days, but she has seen him rewarded for the hard work he has put in.

"It’s hard to put into words but Iam just so happy to see Greg in a good place mentally," she said. "He's worked really hard on helping himself getting healthier in the mind. His family and close friends have made a huge difference. He is very close to his nan, pop, parents, siblings and family, and they've stood by him through thick and thin.

"Although he has had a public spotlight on him, particularly over the past 12 months around his mental state, his determination to help himself, his love for his children, the strong relationship we have as a blended family with the support of Sally, my family, our close friends from his home town and his rugby league family [have all helped]. I think he knows we will always be there for him, albeit the circle has become much smaller.

"There are good days and average days but [given] his approach to focusing on his mind as well as his body, he is in a better place. Spending time in his development role at Souths, then training, during our time in isolation, I guess he started to get his spark back. I started training with Greg and, before I knew it, we were doing shuttle runs and I thought to myself, 'He's training like he wants to play rugby league again'.

"We've learnt along the way that everyone is fighting their own battle no matter how big or small but with Greg, he isn't ashamed of openly speaking about this and continuing his professional help is something I will support and stand by him."

The cap fits - sort of

The NRL has no one but itself to blame for the confusion over the salary-cap situation relating to Inglis and Souths.

Inglis threw the game a curve ball when he retired last year without pay – not through a medical retirement but because he didn't feel he could perform at his best. As he explained this week, he could no longer meet his own expectations. Souths and Inglis went through all the right channels to get a ruling on the salary-cap implications.

Everything they did was transparent and above board. So it was the NRL's job to make a decision that was not only fair to Inglis and Souths but that would also set a precedent other clubs could follow.

It came up with a ruling that was so confusing that NRL chief operating officer Nick Weeks had to explain it to the clubs in person. 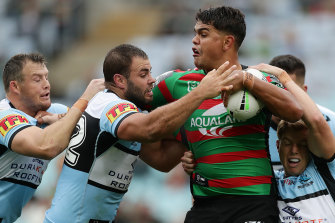 The money freed up by the departures of Sam Burgess and Greg Inglis paved the way for Souths to sign Latrell Mitchell.Credit:Getty

Basically, the NRL allowed the Rabbitohs to remove all of the remainder of Inglis' playing contract from the salary cap and only counted the money he was being paid for off-field work after he retired. It's a ruling that was always going to backfire on the code and open the floodgates for other clubs to use as a loophole to discard players in the future.

There is now a clear incentive for clubs to encourage players, particularly those nearing the end of their careers, to retire without pay before their contracts end. The club will then secure full salary-cap relief. This arrangement – and the medical retirement of Sam Burgess – allowed Souths to sign Latrell Mitchell this year and Jai Arrow for next year. It has other clubs fuming. But it has all been done within the rules set out by the NRL.

Cody Walker aims to use the rest of this season to regain the trust of his teammates and coach Wayne Bennett after he was handed a two-match ban on Friday for his role in a street fight in his home town of Casino. "I like being part of the leadership group but I need to restore people's faith in me," he said. "What happened that night was not an indication of my character and I want Wayne, my teammates and the fans to know that. I've got to work to get trust back. I'm just so embarrassed."

It's not a straightforward story. Then there is the blackmail. It is believed Walker has been in the sights of a man who is alleged to have blackmailed him for some time. When a man offered Nine, publishers of this masthead, the video of the incident, we didn't make an offer for it. One of our rivals tried to indicate we did.

We saw the video and I rang Souths about it. They revealed the blackmail to me. A bit of research told me that the person trying to sell the footage had previously tried to peddle another story about Walker but never provided evidence to back up his story. 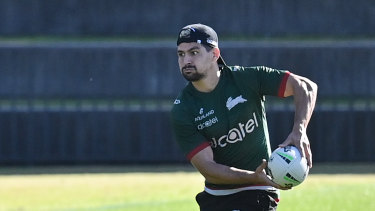 In a death blow to their already wobbly image as the NRL's "silvertails", Manly are being asked to tighten their belts – or maybe just keep using them.

Manly players and staff may be required to hold on to their clothing items for two seasons. This text message was sent out by Manly football manager John Bonasera to all staff.

"Given the current situation with retail stores and clubs being down on revenue due to lack of merchandise sales, the club has advised that we need to keep ALL of our 2020 gear (including dress shirts and pants) at the end of the season as we will likely need it in 2021. Numerous retail stores are still waiting for the arrival of 2020 gear and won’t sell anywhere near as much as normal during the season as a result.

"They are the main source of income for sales of club merchandise and in particular for the providers of gear, like Dynasty, ISC etc. In short, please keep EVERYTHING from this season until further notice because there will only be limited top ups available next season."

Manly chief executive Stephen Humphreys said this did not mean the club was about to fold.

"It's more about being cautious due to the fragile state of the apparel wear industry," he said. "That text was sent out just to be careful with the gear given the state of that industry. We will probably be all right but it's better to be safe than sorry. It won't relate as much to playing jumpers ... just most of the rest of the gear players and staff wear. We are not doing it because we are in a bad way."

The Sea Eagles have $32 million to spend on a centre of excellence and a new grandstand, and the work for both facilities has been out to tender. It raises some interesting questions, the most obvious of which is: are they going to use the centre of excellence?

Not extensively, if Sea Eagles coach Des Hasler has his way. Manly don't have exclusive use of Brookvale Oval and, unless that changes, Hasler is happy to train at his current base of Narrabeen. The fear is that the centre of excellence could become an expensive white elephant.

"We will have our headquarters at the centre of excellence but I'd see us still using Narrabeen [for training] as Brookvale is not always available to us," Humphreys said. "It will be a hybrid of both facilities."

Angel Di Maria: I'm Glad I didn't move to Barca in 2017. I am happy at PSG
The wife of a Serbian from galaxy called for shooting rioters
Modric on how Mourinho criticised Ronaldo: Cristiano almost cried at half-time
Giorgio Chiellini: I came close to leaving Juve twice: to Real Madrid in 2010 and to Manchester City in 2011
Herrera on Neymar and Mbappe: PSG don't sell stars, they buy them
Enrique on the 2015 Champions League final: Told the team: the Worst thing that can happen is to be a Juve player in a match against Barca
Gladbach shows how the concepts of Cruyff and Guardiola can be applied
Source https://www.theage.com.au/sport/nrl/modern-family-the-team-behind-gi-s-rugby-league-rebirth-20200523-p54vsq.html?ref=rss&utm_medium=rss&utm_source=rss_feed

King: The crucial stat that will win games

Liverpool could lift title at Anfield after police calls overruled

'We were wrong': NFL commissioner regrets stance on player protests

We were wrong: NFL

On the streets of New York City, pandemic and protest collide

'Forgotten' Gippslanders still finding their way after the fires

No new COVID-19 cases as protesters prepare to march

WHO advises to wear masks when distance isn’t an option

China warns against travel to Australia

US protests ‘morphing into something else’

Orange County Sheriff and Officers Join ‘A Walk of Mourning and Restoration’ in Orlando, Florida

‘Do not travel to Australia’: China warns of racism

Citing racism and violence, China warns against travel to Australia

Virus reproduction up in parts of England

Trump calls for US shift in virus strategy

Vigil Held in Brooklyn for Breonna Taylor on Her 27th Birthday

US to reduce troop numbers in Germany

Authorities on edge over long weekend

‘HAVE TO BE RUTHLESS’: Donald Trump haunted by Playboy interview

Affordable Adelaide suburb the most in demand in Australia

The secret behind Kia’s success

After the divorce, Amanda learnt her ex's salary. His lying crippled her