It's best to have an umbrella at the ready as more showers and thunderstorms are predicted to remain in south-east Queensland, the Bureau of Meteorology says.

Meteorologist James Thompson said a line of severe thunderstorms swept through the Brisbane area over the weekend.

"Severe wind gusts of 93 kilometres per hour were detected at the airport as well as some severe hail in excess of two centimetres at Acacia Ridge, Oxley, Victoria Point, Mount Cotton and Keperra," he said. 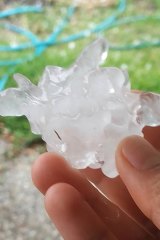 "There were showers on Saturday but Sunday was the big day for storms. The highest rainfall total we saw was at Mount Sylvia on the Brisbane river catchment that had 67 millimetres.

Mr Thompson said the north Brisbane suburb of Brighton had 56 millimetres of rainfall while wind damage was reported north of Ipswich on Sunday.

There were 1672 Energex customers without power in the Brisbane City area and 2606 likewise in Redland City area on Sunday afternoon.

Mr Thompson said a trough system was dragging in moisture to Queensland.

"That moisture helps with any storm development, which is why we saw a heavier total of rainfall and storms coming through the area," he said. 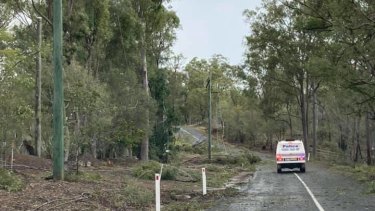 Mr Thompson said there was a slight chance of a thunderstorm on Monday afternoon.

"Most of the weather is moving offshore this morning and we've already had a few showers but there may be something lingering later today," he said.

Mr Thompson said a severe thunderstorm was likely on Tuesday while Wednesday could bring a 70 per cent chance of showers and storms in the south-east.

"We often see the storm season pick up at the end for October and November so it's not too surprising that it's moving through south-east Queensland," he said.

"We do start things clearing off on Thursday with a brief period of cloudy conditions before thunderstorms or showers come back on the weekend."

Cavani scored 3 (2+1) points, coming on as a substitute in Manchester United's match with Southampton. He has 3 goals in 5 games in the Premier League
Solskjaer about the comeback against Southampton (3:2): Manchester United never give up - this is a feature of the club
Koeman about 4:0 with Osasuna: an Important win, I'm happy. Barcelona can't afford to lose any more
Milan have scored in 29 consecutive Serie A games. This is a repeat of the club record of 1973
Messi dedicated the goal to Maradona, showing a newells old boys t-shirt
Clarence Seedorf: if Barcelona sign Depay, so much the better for them. One of Europe's top talents
Maradona's doctor is under investigation for Diego's death. His home and clinic were searched
Source https://www.smh.com.au/national/queensland/more-thunderstorms-and-showers-to-hit-south-east-queensland-20201026-p568jb.html?ref=rss&utm_medium=rss&utm_source=rss_national

The reading wars are over - and phonics has won

NSW tiring of the Premier's disregard for taxpayers

In the line of fire: Will Morris survive at the Sharks?

'People don’t want to look the same': A guide to buying a bespoke suit

The challenges and joys of a second career in teaching

It's all academic for me

Labor pushes for more jobs in the bush to revive economy, environment

'It looks dodgy': watchdog to look into land deal for state-significant project

The two issues policymakers have to grapple with on JobSeeker

Morrison should coax Britain into fray with China

Crown on the hunt for new heads

Our allies need to step up response to China

From the pandemic, a new stage of laughter and music for Melbourne

Morrison should heed his own advice - and fix his culture problem

Help wanted: Would you work in Victoria's quarantine hotels for $85k?

When it comes to leadership, credit is long overdue

'Playing in shadows': Towers approved next to Birrarung Marr

The towns that COVID-19 forgot

Fast trains on the wish list ahead of Queensland's delayed budget

Warner leaves SCG in agony, in doubt for first Test with groin injury

There must be a better way of dealing with this

There's always time, if not a watch, to appreciate a job well-done

‘WON’T BACK DOWN’: Bannon’s back as Trump weapon in election fight

Warner in doubt for opening Test against India

Fraser Island Fire Continues to Rage as it Reaches 74,000 Hectares

Hong Kong leader says she has 'piles of cash at home,' no bank account, due to US sanctions

Toys pulled from Qld shelves over safety concerns ahead of Christmas

It's done: Tigers release Aloiai for fee after Ofahengaue signing

As summer arrives, Sydney's flying foxes are waiting for their sprinklers

Quirks, bad pricing: How not to sell your home