After days of speculation about offering safe haven for Hong Kong citizens, the Prime Minister has adopted the most limited and least costly option he could find. Given current international travel restrictions and limitations of Australia’s visa system, that is understandable.

But why let such speculation run riot when the government would have been getting consistent advice there was little that it could genuinely do? Was it again just about poking the Chinese government in the eye or was there a broader strategy?

The Prime Minister set the hares running last week by encouraging talk of offering a "safe haven" to Hong Kong citizens. Safe haven visas were first developed to provide temporary safe haven for Kosovar refugees during the Balkans crisis of the late 1990s. That was never going to be the model Morrison would use as it relied on strong co-ordination by the United Nations. The UN has no interest in getting involved in the Hong Kong situation. These visas would also require some level of co-operation from the Hong Kong authorities – unlikely under the current circumstances.

On Wednesday, reports in the Herald suggested the government was considering "Tiananmen-style" visas. These were four-year temporary protection visas, or TPVs, that were provided by the Hawke Government to Chinese students who were in Australia at the time of the Tiananmen Square massacre on June 4, 1989. In 1993, holders of these visas were allowed to apply for streamlined permanent residence visas known as the "1 November" categories. The criteria were designed to ensure just about every applicant would be approved.

Holders of the Hawke Government’s four-year TPVs were provided with full work rights as well as access to Medicare and social security until they secured permanent residence four years later.
But the Morrison government is not even offering TPVs.

According to reports, the government has offered Hong Kong students and temporary graduate visa holders already in Australia the opportunity to extend their stay for up to five years after graduation. Most students already have the option of a two-to-four year temporary graduate visa after course completion. These visas do not give holders access to Medicare or social security or any help with getting a job. It is unclear whether this five-year arrangement applies only to Hong Kong citizens or whether it will operate more broadly. 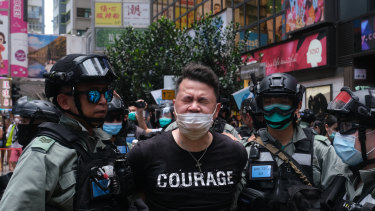 There will be a pathway to permanent residence at the end of the five-year period but the nature of the pathway remains unclear beyond what is already available to all temporary graduate visa holders. That is a very minimal advance on what these visa holders can already access.

Temporary skilled workers from Hong Kong who are currently in Australia can also have their visa extended for another five years with a pathway to permanent residence after that period. New temporary skilled-worker visa applicants will also have access to a five-year visa subject to meeting relevant occupational criteria and "appropriate" labour market testing.

Once again, it is not clear whether this five-year visa, instead of the more standard four-year temporary skilled visa, will only be available to Hong Kong citizens or whether it will be available more widely. If only available to Hong Kong citizens, then the government is just making an already complex system unnecessarily more complex as the change will make little practical difference – is it just for show?

Also on Wednesday, Liberal MP and former immigration minister Kevin Andrews suggested on ABC TV that the skilled independent points test could be altered to favour Hong Kong citizens. He seems to have forgotten that a key objective of the points test is to avoid discrimination on the grounds of nationality, race, religion, etc.

The Prime Minister has said his government is still looking at how Australia might attract business migrants from Hong Kong. Once again, the Prime Minister will have been advised that is contrary to the non-discrimination principle that Australia has followed since the Whitlam government. The government will need to be a lot more strategic and subtle about it if it wants to genuinely attract more business migrants from Hong Kong, including its plan to attract entire Hong Kong-based businesses.

And finally there are the current restrictions on international movement into Australia, particularly for temporary entry visa holders. Would the Morrison government be prepared to waive these restrictions just for citizens from Hong Kong?

Once restrictions on international movements are lifted, would the Morrison government be comfortable with large numbers of Hong Kong citizens travelling to Australia and then applying for asylum? What would that mean for the government’s border protection credentials?

Abul Rizvi is a former deputy secretary in the Department of Immigration.

Abul Rizvi was a senior official in the Department of Immigration from the early 1990s to 2007. He is a former deputy secretary of the department.

Tammy Abraham: Lewandowski is the best striker in the world
Dinamo Brest will play Astana, Celtic will play CR Reykjavik in the 1st round of Champions League qualification
Ronaldo can move to PSG. Mendes communicated with Leonardo (Foot Mercato)
De Ligt will miss 2-3 months due to shoulder surgery
Nagelsmann about the comparisons with Pep, Mourinho and Klopp: They are much more successful. I didn't win anything of note
Pochettino can take charge of Roma (As)
Alessandro Del Piero: Pirlo has everything to achieve more success than Zidane
Source https://www.smh.com.au/national/morrison-s-hong-kong-visa-changes-fall-short-of-safe-haven-20200709-p55alf.html?ref=rss&utm_medium=rss&utm_source=rss_national