A Melbourne music photographer who has worked with some of the country's leading musicians has confessed he was an "abuser" who had "displayed pure misogyny" after he was the subject of a string of sexual misconduct allegations published on social media.

In a 3000-word apology posted online, Jack Stafford, 29, admitted exposing himself to his subjects, initiating explicit conversations, encouraging subjects to shoot in the nude in situations which made them uncomfortable and sharing images "that were not mine to share" with third parties.

Stafford said there were "other men... just everywhere" who had done similar things and had "knowledge of others and not spoken up about it". 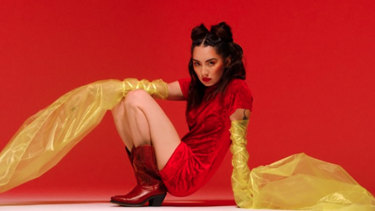 Stafford recently photographed more than 120 artists, including Kate Miller-Heidke, Odette and Ali Barter, over Skype for a coronavirus isolation series.

He confirmed to this masthead that he was the unnamed photographer referred to in a string of allegations collected by Brisbane musician Jaguar Jonze on her Instagram page.

Jonze - the pseudonym of performer Deena Lynch - published on the weekend on Instagram that in her time in the industry she had "come across many predators who still abuse their place of power... and manipulate the trust people, especially young female musicians, have given to them".

Lynch revealed she had been sexually assaulted last year by two music producers and "felt alone, ashamed and didn't know what to do or where to go".

"If you have been affected by a similar story and need a safe space to land in this sometimes terrifying industry - please reach out to me," Lynch, who was a contender on Eurovision: Australia Decides, said. "I don't want this pattern to continue."

Followers shared their experiences and within 24 hours, Lynch said she had heard from 20 people making claims about "the same male photographer".

By Monday afternoon, Lynch said the tally was "59 women affected by the same man [and] 88 other horrific stories". She said she did not realise her post would "unearth this iceberg".

"We deserve safety, we deserve respect," she said. "This has to be stopped."

"With these stories women are sharing it's so obvious how often this happens now, and that sickens me," Lynch said. "The difficult thing is how much fear you're riddled with when situations like that happen to you. More often than not a lot of women are in positions where they feel their hands are tied, they feel no-one will believe or listen to them. And I was one of those women."

Lynch said she and others felt "so limited" by Australia's defamation laws which "stop me from warning people on who not to work with, on who takes advantage of those situations of vulnerability".

She said she would not name the subject in her posts out of fear of legal action.

Stafford said on the online blogging platform Medium that, "with some shifty manipulative bullshit lawyer I could claim defamation in some of these instances [but] I absolutely will not go down that path if I don’t have to".

"I support wholeheartedly the movement Jaguar Jonez [sic] is creating," he posted.

However, Stafford said he did not want to disown his conduct as "the overall aura, the point people are trying to make is still there".

"These are things I accept and behaviours that are wrong," he said. But, he added, "I've never physically hurt anyone or touched anyone or anything like that, I don't want to be put into this bracket."

On Medium, he wrote: "There isn't [sic] blurry lines ... in professional settings, there are clearly marked ones that I took it upon myself to blur with a complete disregard of the consequence or comfort of the other person".

"I abused my power. And have displayed pure misogyny in more than just my professional career but also in my personal life."

He referred to having "perversion of my mind" which led him to "inflict pain onto people". "I was absolutely wrong," he said. "I am an abuser".

Stafford said he would never work in the industry again, saying "I want to be the example that scares the shit out of other men".

"The patriarchy absolutely exists and I abused my privilege within it. As I go down I want to bring it with me."

In December 2017, hundreds of Australian women from the music industry signed an open letter in response to the #MeToo movement, in which they shared experiences of “uncountable discrimination, harassment, violence and the general menace of sexist jargon” in the industry.

And in 2018, US newspapers including the Boston Globe and New York Times reported allegations of widespread sexual and emotional abuse against models, including accusations against prominent photographers.

Valencia presented three uniforms for the 2020/21 season
Ter Stegen agreed to sign a 5-year contract with Barca
Bale was not included in real's bid for the match with Manchester City in the Champions League
Arsenal have offered Willian a 3-year contract
Aurier agreed to move to Milan. Tottenham want 20 million euros for a defender
Can-Casillas: One of the greatest is leaving the stage. You have always been an example, my friend!
Atletico President: Simeone is great. He constantly brings victories and titles
Source https://www.theage.com.au/culture/music/music-photographer-admits-i-m-an-abuser-after-metoo-posts-20200713-p55bnc.html?ref=rss&utm_medium=rss&utm_source=rss_culture