NAB boss warns economy will be weak until 2022

National Australia Bank chief executive Ross McEwan has underlined the slow and uncertain economic recovery ahead, saying hard-hit industries such as hospitality and education may not experience a sense of normality until 2022.

Even so, he emphasised the outlook was "highly uncertain," saying the economy faced "many challenges" in the short term, as NAB said commercial property, retail and tourism businesses were among the most likely to defer their loan repayments.

NAB expects economic conditions will start improving in 2021, with gross domestic product not returning to pre-pandemic levels until 2022. 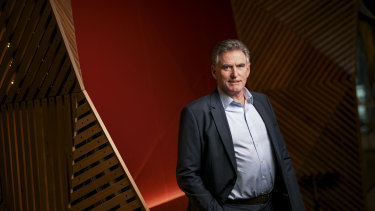 Chief executive Ross McEwan said the bank would need to continue supporting some customers, and there would be some borrowers who would be better off selling their properties.Credit:Eddie Jim

"You’re seeing even the universities which rely on a lot of the external students coming in having to restructure themselves. You’re seeing accommodation, you’re seeing hotels, casinos, restaurants, bars where they are still locked down or limited people coming into those areas, are certainly struggling," Mr McEwan said.

"If we get ourselves through this, 2022 as I said is probably a year where a lot of those industries are getting back to what is the new normal."

NAB's profits were better than markets expected, but a key question among analysts is whether the bank will need to take more provisions for bad and doubtful debts as a result of the pandemic.

Macquarie analysts led by Victor German said they were surprised NAB did not boost its provision coverage, which was lower than rivals. "We continue to see consensus expectations around impairment charges as too optimistic," the analysts said.

Atlas Funds Management chief investment officer Hugh Dive said NAB's key market of small and medium enterprises had historically been a key source of bad debts for banks, which suggested NAB was likely to need higher provisions for soured loans. "I cannot see how there won't be much higher loan losses in business banking than there will be in mortgages," Mr Dive said.

NAB shares had risen the most of the big four in afternoon trade, gaining 1.3 per cent to $18.25, after the better-than-expected result.

After banks allowed customers to pause repayments as an emergency measure earlier this year, NAB said it had deferred 86,000 home loans and 38,000 business loans. About 16 per cent of mortgage customers had resumed repayments.

As ASIC said, we’ll take every reasonable step to keep people in homes and keep them moving, but there unfortunately will be some situations where it’s better off for people to actually sell up and start again, so that they can take some equity out of the situation.

Unlike Commonwealth Bank, which this week said it expected the majority of people who deferred loans could resume repayments, Mr McEwan said he would not make a prediction on how many of these customers would recover. The bank has in recent months been calling clients with deferred loans, and Mr McEwan said it had contacted 24,000 of the 90,000 customers so far, starting with the highest-risk loans.

Mr McEwan made it clear the bank would need to continue supporting some customers, and there would be some borrowers who would be better off selling their properties, noting guidance from the Australian Securities and Investments Commission (ASIC) urging banks to work with customers to keep people in their homes where possible.

"As ASIC said, we’ll take every reasonable step to keep people in homes and keep them moving, but there unfortunately will be some situations where it’s better off for people to actually sell up and start again, so that they can take some equity out of the situation," he said.

Amid a series of restructures that are set to result in job losses, NAB's expenses rose 2 per cent, and it said achieving a target to keep expenses broadly flat looked "increasingly challenging", in part due to the extra staff needed to support customers in the crisis.

NAB's common equity tier 1 capital was a strong 11.6 per cent of risk-adjusted assets, after the lender raised $4.25 billion in new equity from shareholders early in the pandemic.

Conte on 4:3 with Fiorentina: impressed with Inter's attack. We didn't have enough balance, we paid for it
Zidane about 3:2 with Betis: real can get better and will. A difficult game, but we believed in winning until the end
Dest said goodbye to the Ajax players and will fly to Barcelona today (Gerard Romero)
Vidal made his debut for Inter in the match against Fiorentina
Barcelona will only consider Zinchenko if Firpo leaves
The referee after VAR for a foul on Jovic removed defender Betis Emerson
Lampard replaced Kepu, but got 0-3 from West Brom in the first half. Then Chelsea got together and gave a comeback of the weekend: only the pupils scored
Source https://www.theage.com.au/business/banking-and-finance/nab-profits-slump-7-percent-meeting-costs-target-increasingly-challenging-20200813-p55lga.html?ref=rss&utm_medium=rss&utm_source=rss_business