The NSW Nationals have been accused of branch-stacking and then dissolving a rural branch after members raised questions about the preselection process of a state MP.

The MP, Gurmesh Singh, was selected at a November 2018 meeting for the seat of Coffs Harbour. But office holders of one of the seat's two branches raised doubts about the voting process and his eligibility. 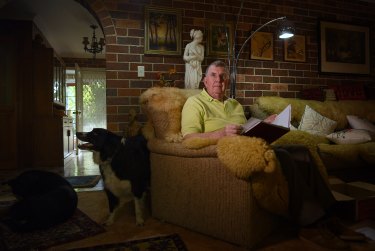 Barry Lee, the former chairman of the Orara Valley Nationals branch, who says he is 'dumbfounded' by the actions of his party in the Coffs Harbour area. Credit:Kate Geraghty

Members of the Orara Valley branch, who had raised the questions, say they turned up to their annual general meeting in July 2019 only to find their numbers had suddenly swelled by almost double.

The newcomers included Andrew Fraser, Mr Singh's predecessor as MP for Coffs Harbour and currently chairman of NSW Nationals. They intervened to spill existing office holders before the meeting ended in chaos.

"We wondered just what the hell had gone on," Barry Lee, the branch's then vice chairman, told The Sun-Herald at his house in Bonville, near Coffs. "We were not experts at fighting these kinds of battles."

After months of emails and letters to party headquarters, then state director Ross Cadell told the members on January 31 – his final day in the role – that Orara was "no longer [a] constitutionally formed branch", effectively dissolving it. 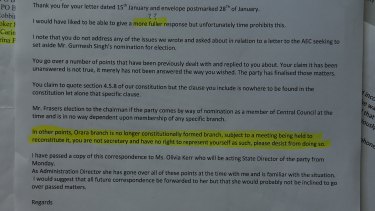 The email from Ross Cadell, then state director of the NSW Nationals, that deemed one of the two branches in the Coffs Harbour electorate was unconstitutional. Credit:Kate Geraghty

The local party spat has the potential to create wider ripples for the NSW Nationals, who recently threatened to take down the government of Premier Gladys Berejiklian over koala planning laws they said undermined farmers' rights to clear land as they see fit.

One of the first MPs to complain about the koala guidelines was Mr Singh, who, according to a Channel Seven report, told Planning Minister Rob Stokes that his family's properties could be affected.

Mr Singh told The Sun-Herald he had spoken to Mr Stokes "about various issues" involving the koala planning policy.

"I did not make representations on behalf of myself or any family member, but I produced a map created by the planning department to illustrate how idiotic the policy is," he said. "Koalas do not live in macadamia trees, on roads, on sand dunes, on roundabouts in town, or on industrial buildings."

Mr Singh referred all questions about his eligibility to run as a Nationals candidate at the 2019 election to the state's central organisation. Mr Singh declined to say whether he had been a member for the requisite six months prior to the election, nor whether he had received a waiver from the party's organisation as an alternative.

The Sun-Herald also asked Mr Fraser for comment about why he changed branches from Coffs to the Orara Valley, and whether his transfer had been approved by the local branch three months before he voted at the July meeting.

Mr Fraser has told the local newspaper he had property in the Orara Valley, making him eligible to switch branches.

Documents seen by the The Sun-Herald show the small branch's numbers swelled from 12 to 23 as a result of those transfers. Mr Cadell, who now works as a lobbyist at Newcastle Ports, defended the party's actions in closing down the Orara branch.

"The rules were entirely followed," he said. "The only problem was they didn't like the rules. It was a large amount of people [who switched] but it is quite regular for people to transfer between branches."

Members, though, describe being bewildered by the sudden interest in their branch from party heavyweights, with one saying: "We abhor branch stacking within the Labor Party but we witnessed it ourselves ... I couldn't believe it."

Two long-standing branch members Roslyn and Paul Owens were so distressed and disgusted that they resigned their memberships and returned the medals they had received for 40 years' party service to head office.

"If National Party members don't support their MP, why should Coffs Harbour’s voters?

"[Nationals leader] John Barilaro must explain why Mr Singh was handed a golden ticket to a safe National Party seat if he wasn’t even eligible for preselection," Mr Mookhey said.

The Nationals' current state director Joe Lundy said all preselections were conducted "in accordance with our Constitution and Rules, using a predetermined structure with oversight from our office and the Central Council".

He declined to answer whether Mr Singh had served six months as a member before being chosen as a candidate, saying it was "an internal party matter".

Sandro Tonali: Milan on the crest of a wave. The Rossoneri shirt is pressing, but I'm getting in shape
Kadyrov's adviser hit the judge in the groin, and his son was dismissed from Akhmat and banned for three years. At first they all denied
AEK Carrera lost both matches in the Europa League with a total score of 1:5
Stefano Pioli: Milan have not achieved anything yet. The season is long, we will face difficulties
Mourinho 0:1 with Antwerp: the Best team won and the worst team lost
Bale did not make a performance in his first three games for Tottenham. He hasn't scored since January
Father Courtois: Keylor Navas was not a good teammate. When he left for PSG, everything became easier
Source https://www.theage.com.au/national/nsw/nationals-accused-of-stacking-then-dissolving-branch-in-preselection-stoush-20200917-p55wsc.html?ref=rss&utm_medium=rss&utm_source=rss_national

Ask a Reporter: Did the LNP just admit that New Bradfield Scheme won't be built for years?

Writer Kate Cole-Adams learnt about herself and others in lockdown

Where to vote on election day: Full list of Coast booths