New Attorney-General Mark Dreyfus says the national corruption watchdog will be empowered to investigate the use of grants programs for politically motivated pork-barrelling, saying such abuse of public money should be regarded as corruption.

In his first interview since being sworn in as the country’s top law officer, Dreyfus said legislating Labor’s promised national anti-corruption commission by the end of the year was his “paramount priority”, calling it a “nation building” reform. 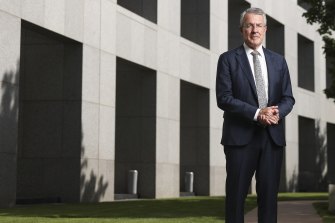 Dreyfus said he was confident the government would soon be in a position to bring legislation before the new parliament, which will set out in detail the remit of the commission and the definition of corruption upon which it will operate, and confirmed pork-barrelling would be within its purview.

“I see it as essential that the commission should have jurisdiction to investigate what is being referred to as pork barrelling,” he said. “There is a point at which discretionary grant programs cross the line into corruption where you are giving away public money for private purposes, then that is appropriately regarded as corruption.”

Dreyfus did not commit to a timeline for how soon a draft bill would be released, but said the process was not “starting from scratch”. Rather, it would build on the model advocated by independent Indi MP Helen Haines who introduced a widely-lauded integrity bill into the last Parliament, as well as draw on the anti-corruption commissions already operating in states and territories.

“There’s a need for precision and accuracy in this bill [and] the full resources of the Attorney-General’s department will be devoted to it with the assistance of parliamentary counsel,” he said.

“We’ve also got the advantage at the Commonwealth level of being the last Australian jurisdiction to create an anti corruption commission. What that gives us is the opportunity to pick the very best features of the six state and two territory anti-corruption commissions that already exist.”

A new National Anti-Corruption Commission Taskforce has been established to advise government on the policy and design of the integrity agency, with the Attorney-General’s department advertising last week for senior roles within the body.

In a sign the government is keen to keep the crossbench on side, Dreyfus said he had spoken to most of the independents since being sworn in, among them Haines and the teal MPs who campaigned heavily on the issue of a robust integrity commission. He said he assured Haines she would be “closely involved” in the process, which is expected to include the bill being scrutinised by a joint parliamentary committee comprising both MPs and senators.

Dreyfus’ appointment as Attorney-General marks his second time in the role, after holding the portfolio for seven months at the end of the Gillard-Rudd era. He served as shadow attorney-general throughout Labor’s nine years in opposition.

Momentum for a federal integrity agency was fuelled in part by a string of scandals under the former Morrison government, including a $660 million commuter car park fund and a $100 million sports grants scheme, which the Auditor-General found were not merit-based. An investigation by The Sydney Morning Herald and The Age found that more than $1.9 billion in grants administered under the previous government went to Coalition seats while $530 million went to Labor-held seats over three years.

In a key policy difference with the former Morrison government, Labor went to the May election vowing to establish a body that would have broad and retrospective powers to investigate and hold public hearings into allegations of serious corruption within government, including conduct by current and former politicians.

Dreyfus said it would be a matter for the commissioners to determine what matters to investigate and when to hold public hearings. The number of commissioners who would be appointed to lead the agency had not been decided, he said.

“We anticipate that most of the hearings of the national anti-corruption commission - just as for the New South Wales ICAC or the Victorian IBAC - will be held in private, but there has to be a power in the commission to hold public hearings,” he said.

He said a key feature of the commission would be its capacity to provide guidance to government and public servants on the proper way for discretionary grants programs to be administered. But this would be done via recommendations contained in the reporting process following an investigation, rather than a proactive advisory role.

“I don’t see the commission as having some freestanding role to supervise government. I don’t see it as very likely that, independently of a particular investigation, they will make some general report,” he said.