Auckland: A rocket from small-satellite launch firm Rocket Lab failed to reach orbit minutes after a successful liftoff from New Zealand on Sunday, the company said, losing its payload of seven small satellites it had intended to carry to space.

"An issue was experienced today during Rocket Lab's launch that caused the loss of the vehicle," the company said on Twitter, adding more information will be shared as available. 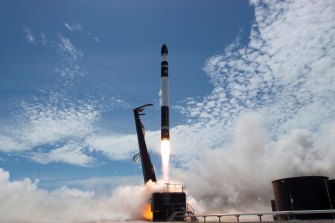 Rocket Lab, pictured hosting a successful 2018 launch from the Mahia Peninsula on New Zealand north-east coast, says it lost the rocket during its latest launch.Credit:AP

"We are deeply sorry to the customers on board Electron," the Auckland, New Zealand-based company said. "The issue occurred late in the flight during the 2nd stage burn."

Rocket Lab is one of a growing group of launch companies looking to slash the cost of sending shoebox-sized satellites to low Earth orbit, building smaller rockets and reinventing traditional production lines to meet a growing payload demand.

The rocket's altitude peaked at 195 kilometres roughly seven minutes after liftoff launched from Rocket Lab’s base on the Mahia Peninsula at 9.20am local time, before quickly decreasing, according to in-flight telemetry on the company's live video feed.

The mission, named “Pics Or It Didn’t Happen” was aiming to send five tiny Earth imaging satellites from Planet Labs, one microsatellite from Canon Electronics Inc., and a cubesat from British company In-Space Missions into a sun-synchronous orbit 500 kilometres above Earth.

"While it's never the outcome that we hope for, the risk of launch failure is one Planet is always prepared for," Planet Labs said in a statement, adding it looked "forward to flying on the Electron again" in the future.

Bas Pro 1:2 from Inter: after the opening 20 minutes, Bayer entered the game. I believed that we could do something
Conte on 2:1 with Bayer: When a coach sees such dedication, he is always happy
Sanchez finished the match against Bayer, despite the injury
Solskjaer is the fifth coach with whom Manchester United reached the semi-finals of the European Cup
Manchester United are set to buy Sancho this summer despite Borussia's claim that he is staying
Shirokov beat the judge at an Amateur tournament: promised that # # # # # [vdarit] for a red card-and # # # # # [vdarit]
Brunu has scored 11 goals in 20 games for Manchester United. 7 of them were penalties
Source https://www.theage.com.au/world/oceania/new-zealand-rocket-fails-to-reach-orbit-loses-satellites-20200705-p5594h.html?ref=rss&utm_medium=rss&utm_source=rss_feed

'Photobombing' satellites add to worries about a new frontier of pollution

Gould to tap into Panthers blueprint in bid to transform Warriors

Tangled up in blue, Emma Swift turned to Dylan

City girl’s No.1 tip for starting a fire

Tragic storyline is close to home for Neeson and son

Better in the long run: Marathoners pivot for lockdown

TV star’s ex to be called as witness

Everybody gets a stadium in NSW bonanza

'No party': Tunisia is preparing to have a non-political government

After 10 years of angst, NBN's big milestone has come in the nick of time

Mexico's legendary masked wrestlers thrown out of ring by coronavirus

From ‘dream job’ to ‘nasty’ abuse

Missed another workout? It might be time for an accountability partner

From the Archives, 1977: Three Melbourne banks robbed in a single day

The markets that are bracing for US election volatility

Going solo: Trump's economic surgery won't do much to help the US recover

Freo to recall Hogan to play in defence, Hawks to blood youth

Freo to recall Hogan to play in defence, Hawks set to blood youth

Family may have to accept $1 for home

Andrews pressed on handling of pandemic in parliamentary committee

Elyse Knowles wants to be your landlord

ASX ahead despite simmering US-China tensions

Motorcyclist found dead on Bruce Highway might have been parked: Police

Crashes on Brisbane roads cause commuter delays for kilometres

Security pulls Trump out of briefing