All Victorian federal MPs and senators, including Treasurer Josh Frydenberg and Health Minister Greg Hunt, will be forced into 14-days of self-quarantine from Saturday if they want to attend federal parliament later this month.

Health authorities have decided no federal representatives can travel to the Australian Capital Territory for the August 24 fortnight of parliamentary sittings without first undertaking two weeks without either leaving their home or hotel room. 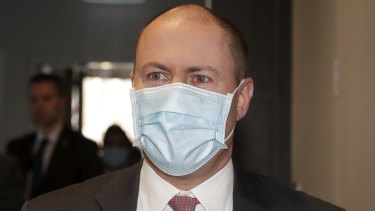 Treasurer Josh Frydenberg arrives wearing a mask for his address to the National Press Club of Australia in Canberra on Friday.Credit:Alex Ellinghausen

The federal opposition will push for Victorian MPs who choose not to travel to Canberra to speak in parliament via videolink, however they will not be given voting rights.

The decision has privately frustrated many MPs, including cabinet ministers, who had been prepared to undertake strict social distancing practices, including wearing masks, travelling alone, driving hire cars and eating, sleeping and showering in their offices.

Mr Hunt, who has been at the frontline of the fight against COVID-19, said there would be "no special rules, no exemption for me" and he planned to quarantine in Canberra beginning on Saturday.

Opposition Leader Anthony Albanese said Labor did not dispute the medical advice but it clearly means many Victorian MPs, particularly those with caring or family responsibilities, will not be able to attend. 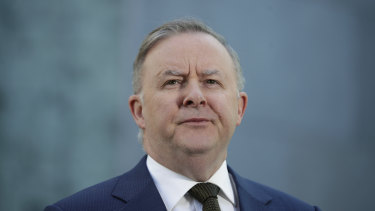 "The government must therefore ensure those MPs can still participate – and represent their constituents - by giving speeches, and asking and answering questions," Mr Albanese said.

"It has never been more important for Victorians to have their say in our Parliament. Given the medical advice, allowing Victorian MPs to contribute to debate via videolink will ensure the Victorian people can continue to have their voices heard."

A working group was formed last month to establish ways for parliament to reconvene after the outbreak in Victoria and several state border closures forced the Morrison government to cancel the scheduled August sitting fortnight.

Mr Albanese said it was "disappointing" Mr Morrison sought his own medical advice before a parliamentary working group had an opportunity to determine whether other protocols may have been possible.

"It also presents a risk to those who are themselves vulnerable, those at increased risk if infected with COVID-19."

His advice is that Victorian politicians hoping to attend the sitting week in person should quarantine for two weeks - either in Canberra, or in their own home in Melbourne providing all members of the household also quarantine.

Members and Senators would then undertake a test on day 12 of quarantine and await clearance before leaving.

Mr Smith and Senator Ryan said they would have "more to say" about operations of parliament prior to its resumption.

Koeman Pro 3:0 with Celta: Proud of the team. The results show that we are on the right track
Milan extended their unbeaten streak to 18 games by beating Rio Ave on penalties in the Europa League qualifier
Arteta on Manchester City in the League Cup: Arsenal are not very lucky with the draw. This is another test
Klopp about losing to Arsenal and Liverpool in the country of dreams, you have to score. Last pass failed
Muller held the UEFA ceremony in the stable. There had Neuer, Kimmich and Evangeliski
Liverpool 4 seasons in a row, cannot get past the 5th round of the League Cup and 2012 wins the tournament
Leno - first Arsenal goalkeeper in 8 years not to miss at Anfield
Source https://www.smh.com.au/politics/federal/no-special-rules-fortnight-quarantine-for-victorians-to-attend-federal-parliament-20200806-p55jaf.html?ref=rss&utm_medium=rss&utm_source=rss_feed