The Western Bulldogs and North Melbourne - two teams heavily impacted by Melbourne's postcode lockdown - say none of their players have chosen against flying to Queensland for their hubs.

There had been concerns that clubs would have players opting out of travelling to the hubs because of personal matters or the need to stay with families, but it looks as though the AFL will allow family to travel if players make the request. 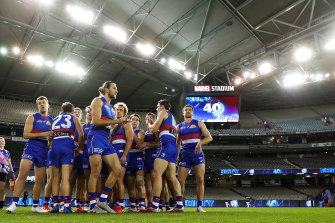 There won't be any Bulldogs players opting out of the hubs, according to coach Luke Beveridge.Credit:Getty Images

"All of the boys are coming up and that's tremendous. I am hoping the partners and kids, there's six or seven now, can all come too," Bulldogs coach Luke Beveridge said after his side's win over North Melbourne on Saturday night.

"I can't see how you'd be able to knock back a father who wants to take his partner and child up … you wouldn't deny that of any young man.

"It is in a sense an adventure. We are looking at it as an opportunity to spend some time together as well as play some footy."

Beveridge also indicated it was likely Lachie Hunter would play in his side's round six match against Carlton next week after serving his suspension for COVID-19 lockdown breaches.

Rhyce Shaw conceded the fact 12 of his players had to move out of their homes at an afternoon's notice during the week due to Melbourne's postcode lockdown was "maybe" a factor in their drubbing.

"I don't like using excuses for football games but with the environment the way it is at the moment it would have played some part I'd suggest," Shaw said.

"Everyone is dealing with it … I think to answer your question maybe [it played a part] but I don't like making excuses."

Beveridge said Hunter, who usually plays on a wing, had been tried as an inside midfielder in scratch matches while suspended.

"It's an intriguing conundrum … we started trying him in another couple of areas," Beveridge said.

"We have a choice to make whether he plays on a wing or inside.

"He's probably more than likely to play, I'd say, based on today how he went … and we might be one or two down, injury wise.

"He could be anywhere.”

Bailey Smith will likely miss the round six game for the Dogs due to concussion while Laitham Vandermeer (head knock) and Lin Jong (ankle) will be assessed through the week.

Shaw said North may have made the wrong call by playing Ben Cunnington.

Cunnington missed the last two games with a back complaint and passed a late fitness test to be cleared to play on Saturday night. However he copped a knock to his injured back early, spent much of the time immobile deep in the forward line and was pulled from the game early in the third term.

"He got up, we were confident and I made the decision to play him so that's where it sits," Shaw said.

"It possibly was the wrong call. We were really confident on all the evidence we were given, we were happy to play him."

Conte on rumors about Juve: I will sue whoever wrote this, as well as the editor-in-chief of this newspaper
Aubameyang on the failure of the FA Cup: That's how we do it
Manchester City remain Interested in Coulibaly and Pau Torres, despite ake's transfer from Bournemouth
Up to 10 players will leave Chelsea this summer. Among them are Kante, Kepa and Marcos Alonso
Sancho has agreed a 5-year contract with Manchester United. The clubs are at an advanced stage of negotiations
Willian is in talks with Arsenal. He refused to sign a 2-year contract with Chelsea
Antonio Conte, Denying what was asked of the players See about the future of Surrey. I have a contract with Inter for 3 years
Source https://www.theage.com.au/sport/afl/north-dogs-players-all-in-on-hub-as-hunter-firms-for-return-20200704-p5592k.html?ref=rss&utm_medium=rss&utm_source=rss_feed