A key employer group has unveiled the changes it sees as most crucial for Australia's industrial relations system, which is among the government's priorities for post-pandemic reform as it tries to get Australians back to work.

The Australian Industry Group, which represents about 60,000 businesses, urged the government to simplify the industry awards that set pay and conditions for millions of workers, make it easier for businesses to bargain with their staff and clarify which employees are casuals. 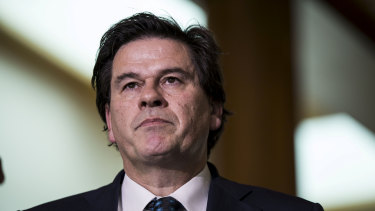 "Now is not the time for tired old arguments about industrial reform," Mr Willox said. "Decisions made by federal and state governments over coming months about reform options will play a big role in determining how long the recovery period will be."

Attorney-General and Industrial Relations Minister Christian Porter welcomed the group's input and said it would be considered by the government along with that of other bodies as it planned potential reforms.

"The government's approach to any reform will have one key focus – to drive jobs growth," Mr Porter said.

Mr Willox wants to stop unions intervening in enterprise agreement processes between workers and businesses unless they already represent staff covered by them and replace the current requirement that agreements leave workers "better off overall" with a less stringent test.

He said those changes would help businesses and workers strike bargains that would meet their needs and help reverse the trend over recent years of fewer agreements being struck.

"The union movement is trying to ensure that Australia makes it through this pandemic as quickly and safely as possible, and that through the recovery we strengthen the rights of working people, rather than doubling down on the failed policies of the past," Ms McManus said.

"The system has worked more in ... employers' favour," Professor Forsyth said. "They talk about the technicality of it, but in the last 10 years employers have found very clever ways around the technicalities."

He supported the Australian Industry Group's proposals clarifying which workers were casuals because that term was not defined clearly in legislation, but on the proviso it not reduce workers' rights.

AI Group argued the government should establish a "simple and clear" definition of casual work so employers had certainty about their workers' rights after a court found a worker who was nominally employed as a casual but worked fulltime hours was entitled to paid leave.

"On the pathway to recovery from the COVID-19 crisis, employers need to be encouraged to employ more people, not deterred from doing so," Mr Willox said.

The environment of Grisman outraged by the behavior of leopards. They believe that Messi can change the situation
CEO akhmata about Glushakov: We are happy with it. We will discuss the future at the end of the season
Arteta Pro 4:0 with Norwich: Arsenal are moving in the right direction
Heness about Sane: This transfer will make Bayern even more beautiful
Pioli about Milan: I hope we finish higher than seventh place
Everton have not lost in 9 home Premier League games for the first time in 4 years
Sane arrived in Munich and passed part of a medical check-up in Bavaria
Source https://www.smh.com.au/politics/federal/not-the-time-for-tired-arguments-employer-group-unveils-industrial-agenda-20200519-p54uf2.html?ref=rss&utm_medium=rss&utm_source=rss_feed

Capacity crowd the aim, Victorians invited to The Everest: V'landys

‘That Thing is Definitely Cooking’: Tornado Touches Down in Kismet, Kansas

Why I lie about sex dreams with my ex

Woolies in isolation and customers warned after COVID test

Ways to build stronger calf muscles with or without a gym

US court sides with publisher of explosive book by Trump's niece

Volunteer groups get cracking in face of COVID challenge

‘Some of those people will die’: Stark reality of state’s virus spike

'Whatever it takes': Rebels vow to hang tough despite COVID-19 exile

Reporter mugged at knifepoint on air

Neurosurgeon Tim Steel found not guilty of assaulting his wife

Kathmandu pessimistic about recovery, despite sales surge after lockdowns

Hi-ho, Silver: Trump says he looks like Lone Ranger in a mask and likes it

Letting Victorians into Queensland would be 'reckless': Deputy Premier

The language of tween fashion according to The Babysitter's Club

Economic recovery a ‘chance’ to ‘lay foundations’ for tax reform

Uncertainty in the border zones as checkpoints hem locked-in suburbs

Uncertainty in the border zones as checkpoints ring locked-in suburbs

Wanderers suffer blow to finals hopes with loss of goalkeeper

Global tourism stands to lose up to $4.8 trillion from COVID-19, UN says

Bizarre block of land for sale

Morning Report 2 Jul 20: US sharemarkets were mixed on Wednesday

ASX up 1% and edging towards 6000; Afterpay sets a new record