Addin Fonua-Blake has confirmed his multi-million-dollar move to the New Zealand Warriors - via social media.

Before the Warriors could even officially trumpet their star signing, Fonua-Blake posted a message on Instagram featuring a photo of himself in the club's playing strip. 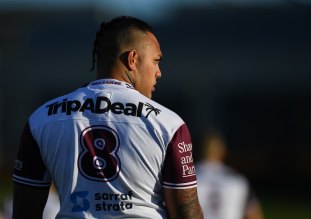 It's official ... Addin Fonua-Blake is leaving Manly for the New Zealand Warriors.Credit:NRL Photos

Just last week Fonua-Blake told Manly he wanted to leave Sydney with his family, and the Warriors did not muck around with a three-year deal understood to be north of $2.5m.

"Hardest decision I've had to make of my career but after with this family my time has come to an end," Fonua-Blake said in reference to the Sea Eagles.

"I’d like to thank everyone from the coaching staff and all the players to all the loyal fans that stuck with us/me through every hard time we had over the past 6 years.

"Excited/Nervous about what waits for me next at the Warriors. Nothing but love for the Bird Gang Brothers . #582 ❤️❤️ My Brotherhood will never be broken with you boys ofas kautamas. Family first in every decision I make."

Fonua-Blake and fellow Sea Eagle Marty Taupau had formed one of the most lethal front-row combinations in the NRL.

Fonua-Blake still had two years to run on his Manly deal, but his sudden exit will free up some much-needed cash for the northern beaches club. The fierce front-rower was expected to pocked around $1.7m the remaining two years of his Sea Eagles deal. 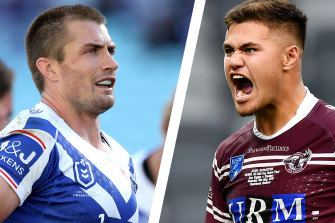 Kieran Foran would do wonders for the development of Josh Schuster should he return to Manly.Credit:Getty, NRL Photos

Manly can now make a serious play for former favourite son Kieran Foran, who won a competition at the club and remains firm friends with star skipper Daly Cherry-Evans and coach Des Hasler.

Hasler was the man who pushed hard to sign Foran at Canterbury for three years.

Foran has been one of the Dogs' only attacking threats when on the field this season, but the Belmore club told him they were not interested in his services for next year, and instead opted to go with 33-year-old Blake Green who is recovering from a ruptured ACL.

The Sea Eagles have a lot of faith in young playmaker Josh Schuster, but know he will learn plenty from an experienced international 30-year-old like Foran. You only hjave to look across town to Jarome Luai who spent an extra 12 months learning under James Maloney, and is now thriving because of Penrith's patience not to rush him in such an important position.

Foran and Cherry-Evans being reunited would give Manly the most experienced halves pairing in the game.

The Messi Foundation won a lawsuit against the ABC newspaper. They wrote about the organization's tax fraud
Mbappe announced the death of 8-year-old Luca, who was battling cancer. The striker dedicated a goal to him on Saturday
Lippi finished his career as a coach. He won the 2006 world Cup with the Italian national team
Acts Kolisevski: Pirlo's perfect, because that gives us confidence. He is not afraid to produce young players
Laudrup on Hazard's injuries: it's sad to see months go by for such an outstanding player
The journalist apologized for statements to Fati: I wanted to extol the beauty of his movements
Khabib on meeting with Ronaldo: I was wondering how he keeps this fire going for 17 years. Motivation, discipline, as I understand it
Source https://www.smh.com.au/sport/nrl/nothing-but-love-for-bird-gang-brothers-fonua-blake-confirms-exit-20200922-p55y0j.html?ref=rss&utm_medium=rss&utm_source=rss_feed