NSW Health made a range of serious mistakes in its handling of the Ruby Princess cruise ship, including the delay in sending swabs for COVID-19 testing and in assessing the cruise ship as low risk.

The report by Bret Walker SC from the special commission of inquiry into the Ruby Princess was handed to the Berejiklian government on Friday afternoon, with sweeping criticisms of NSW Health.

On March 19, 2647 Ruby Princess passengers were allowed to disembark at Circular Quay and travel home but within 24 hours, three COVID-19 tests performed on board had returned positive. 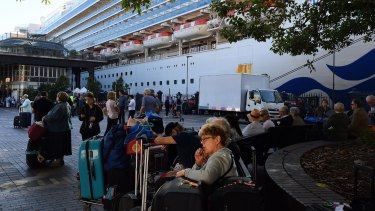 Passengers sit with their luggage after disembarking from the Ruby Princess cruise ship on March 19 at Circular Quay, Sydney.Credit:Kate Geraghty

In the weeks that followed, 712 passengers and 202 crew tested positive and 22 people died. But only 19 people in NSW and 15 people interstate were infected by those passengers.

The report says NSW Health should have ensured that cruise ships were aware of the change to the definition of a "suspect case" for COVID-19 made nine days before the ship docked in Sydney.

"This would have resulted in the identification of such cases on the Ruby Princess. 101 persons fell within the suspect case definition by 18 March, and 120 by the time the ship docked," the report says.

"NSW Health should also have ensured that such persons were isolated in cabins. These were serious mistakes by NSW Health."

The report also warned that he failure to ensure that swabs were collected by an onboard health assessment team "was a serious failure by NSW Health."

It also says that the delay in obtaining test results for the swabs taken from the Ruby Princess on the morning of March 19 was "inexcusable".

"Those swabs should have been tested immediately," the report says.

Premier Gladys Berejiklian said: "In the public interest and for full transparency I am releasing it immediately.

"I have just received the report.I will read it over the weekend and respond early next week.

Tottenham are not selling Mourinho's merch - because Chelsea still own the trademark rights. But it didn't stop Manchester United
Shomurodov is close to moving from Rostov to Genoa for 8 million euros (Sport Italia)
Pobegalov about 12 cases of covid in Shinnik: I hope we can start training by October 4
Kulchiy is likely to become an acting coach of Dynamo. They want to keep Novikov in the club's system
Due to covid, the Premier League season may be considered prematurely completed if the 2/3 and 3/4 rounds are completed
Bayern could give Nübel a loan deal if Ulreich stays at the club
Former Italy striker Pazzini is Interested in Spezia. He is 36
Source https://www.theage.com.au/politics/nsw/nsw-health-made-serious-mistakes-with-ruby-princess-inquiry-says-20200814-p55lsn.html?ref=rss&utm_medium=rss&utm_source=rss_feed