Observing that the immediate COVID-19 crisis and its lockdowns have not caused the major spike in family violence and domestic crimes that were widely feared, Commissioner Fuller said police were making preparations to tackle a surge if job losses persist. 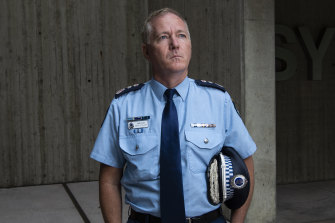 NSW Police Commissioner Mick Fuller fears the impact of economic hardship on crime in the years ahead. Credit:Louise Kennerley

"We have been doing an enormous amount of work with government looking back at the 1990 recession, because there is some similarities around unemployment numbers and the drop in GDP and progressively, probably 18 months to two years after that recession, crime went through the roof," he said.

Authorities are still focused on the immediate pandemic response but they are seeking to ensure that "we don't lose control of public safety in NSW", Commissioner Fuller said, adding that he was monitoring the effect of JobSeeker and JobKeeper payments and their withdrawal.

"My theory is that, if we don't track this closely, we could end up seeing the same sort of crime in volume that we saw in the early 2000s," he said.

Crime rates have largely improved or remained stable since the early 2000s. Police Minister David Elliott confirmed he and Commissioner Fuller had been discussing the potential for crime trends to go backwards, in the wake of the coronavirus-induced recession.

"That’s an evidence-based observation from the Commissioner so I have absolutely no reason to doubt it’s a serious possibility," he said.

However, Mr Elliott said he was optimistic about economic recovery and managing the downturn.

"Because the recession has not been caused by structural deficiencies in the economy, it has been caused by something that ideally we will have a vaccine for early next year. I am actually of the view it will be more like the post-World War I recovery where we saw a boom in economic activity and opportunity," he said.

Some data suggests COVID-19 measures have caused some increase in domestic violence nationally, with an Australian Institute of Criminology survey released in July finding domestic violence victims said it had worsened during the pandemic.

Don Weatherburn, a professor with UNSW's National Drug and Alcohol Research Centre and former director of the Bureau of Crime Statistics and Research, cautions that the effect of economic hardship on crime is complex.

Professor Weatherburn said some crime, including property theft, would not go up but there was a real risk that long-term unemployment could exacerbate other criminal activity.

"When things go bad, whatever is going up at the time will go up faster," he said. "At the moment, the big growth areas are fraud and drug dealing."

Professor Weatherburn said the environment was different to the 1990s and early 2000s, partly because theft of consumer goods was no longer as popular and robbery was not as lucrative today as people carried cards not cash.

He said the huge increase in crime in the 1990s did not start with the recession and began in the mid-1980s.

He also said the effect on family violence was "a bit of puzzle", because people were more likely to commit domestic assaults when under financial stress but an increase did not necessarily show up in overall crime statistics.

Ex-CSKA forward Denis Popov has been appointed head coach of SKA Rostov
Solskjaer after 1-2 with Sheffield: Manchester United have no time to feel sorry for themselves. Saturday's match with Arsenal
Brother Chalova moved to the Serbian Subotica
Barcelona will not sign Garcia in the winter due to financial problems
Rodgers on the draw with Everton: It was unlucky that Leicester did not score the second goal
Ancelotti on 1-1 with Leicester: I don't remember Hames scoring with a right before
Andrea Pirlo: In my 1st season at Juve, we were behind Milan, but we took the title. Everything depends on us
Source https://www.theage.com.au/national/nsw/nsw-police-chief-fears-crime-wave-from-covid-19-economic-hardship-20201126-p56i81.html?ref=rss&utm_medium=rss&utm_source=rss_feed

How I blasted away my double chin

Victoria’s remaining border restrictions with NSW set to be lifted

How science is putting the ‘micro’ into microbrewing

‘They had knives’: Mother of Australia Day beach attack victim tells of son being assaulted by violent mob

Star wars: Musk and Bezos are on a collision course in space

From the Archives, 1951: A geographically challenged traveller

Facebook results soar ahead of an uncertain 2021; Zuckerberg takes aim at Apple