The cost of raising the wall of Sydney's biggest dam will triple to more than $2 billion unless the Berejiklian government can avoid paying for damage to the environment in the World Heritage-listed Blue Mountains area.

Biodiversity offsets the government would need to buy if it lifts the Warragamba Dam wall by 14 metres exceed $1.34 billion to compensate for the loss of flora alone, according to leaked state government estimates obtained by the Sun-Herald. That tally is roughly twice the construction cost of lifting the wall that was put at $700 million in 2016. 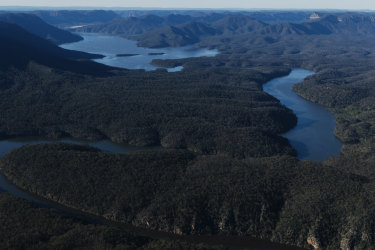 Lake Burragorang sits behind Warragamba Dam, and would potentially fill as much as 17 metres higher if the government proceeds with plans to raise the dam's wall height. Compensating for the environmental damage is unlikely to come cheap.Credit:James Brickwood

Those offset costs are likely to be under-estimates as they exclude effects on fauna, such as the threatened greater glider and regent honeyeater. The government has also admitted it may eventually seek to lift the wall 17 metres to reduce risks to residents in the flood-prone Hawkesbury-Nepean Valley downstream of the dam.

Even with a 14 metre wall, the dam when full would inundate some 6000 hectares of mostly forested areas around Lake Burragorang. Much of the at-risk area sits within a national park.

A spokeswoman for Stuart Ayres, the Minister for Western Sydney who oversees the Warragamba project, did not address offset costs, saying: "The finalised and exhibited Environment Impact Statement will include an assessment of the impact of an increase in temporary inundation on the upstream environment, and on Aboriginal cultural heritage".

Mr Ayres has previously argued taxpayers should have offset fees calculated based on the "rare occasions" of temporary inundations, and that the impacts would be "indirect".

However, as this masthead reported in July, the government's own Department of Planning, Industry and Environment, dismissed this stance, stating in a separate leaked document: "the rationale and conclusion for considering all upstream impacts from temporary inundation as indirect impacts [are] not supported". 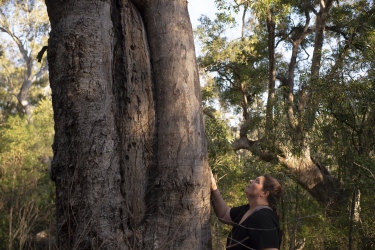 Gundungurra Traditional Owner Kazan Brown with a scar tree on land that will be inundated by floodwater at Burnt Flat by the raising of the Warragamba Dam Wall. Credit:Wolter Peeters

The estimates show that the biggest single category of expected loss would be for narrow-leaf ironbark and red gum forests on rocky slopes, coming at about $321.2 million based on current biodiversity credit rates.

By contrast, Snowy Hydro has earmarked about $100 million to compensate for the damage construction of the giant Snowy 2.0 pumped hydro project will inflict on the Kosciuszko National Park.

Independent MP Justin Field said it was "hugely concerning" that Minister Ayres and WaterNSW have continued to refuse to release the Warragamba project's offset assessments.

Mr Field said the project's viability was "getting shakier by the day" and that any short-changing of compensation payments would have flow-on effects for other developments around the state.

“Any effort to change or override biodiversity offset rules to reduce project costs will create a terrible precedent that will undermine the integrity of the biodiversity offset program in NSW, set back conservation outcomes, and will see every private developer seeking special treatment to avoid paying for environmental destruction," he said.

The Colong Foundation's Mr Burkitt said the real cost of this project could end up being a $2 billion subsidy to floodplain developers. "Imagine what the NSW Government could do to protect existing floodplain residences if this amount of money was spent properly," Mr Burkitt said.

Maradona is the best dribbler with a phenomenal number of goals and assists. But is it true that he won Serie A alone?
Italian championship. Juventus will play Benevento, Atalanta Miranchuk against Verona, Inter away to Sassuolo
Ex-Manchester United defender Valencia moved to Mexico's Queretaro
Gerard Pique: I always dreamed of becoming President of Barca, but I don't know if it will happen
Rejoice and enjoy life in this mediocre time. Remember the great phrases Maslachenko-join
Ex-Manchester City defender Lescott has resumed his career with racing Murcia of the Spanish 4th division
Lampard on Chelsea vs Tottenham match: We are fighting for leadership, the game will be important. But there is still a long way to go
Source https://www.theage.com.au/environment/conservation/offsets-could-triple-cost-of-raising-warragamba-dam-wall-to-2-billion-20201023-p5683m.html?ref=rss&utm_medium=rss&utm_source=rss_feed

He's no Pete Evans, but Mark Humphries is considering a cult

Every picture tells a story of lockdown life in Melbourne

'These actors are going to die': How a Broadway blockbuster came to Sydney

10 things to do in Marvellous Melbourne this week

Best of the week: What to see and do from November 29 to December 5

Live comedy is back – with a few COVID-safe tweaks

Date you’re most likely to be dumped

'Highly speculative' to say COVID did not emerge in China: WHO

The grand house on the hill where Australian art was born, reborn

'Awesome, let’s jump on it': First home purchases on rise in Victoria

Parts of Sydney tip 40 degrees as heatwave descends across NSW

'Not our finest hour': Cate Blanchett on the country's shameful treatment of refugees

Emu Chills Out During Heatwave in Adelaide, South Australia

From fat-shaming to spelling backwards: The secrets of AFL recruiting

‘I AM NOT GOING TO STOP’: Mum’s disgust at email to sick son

From Bali to buying: the great mortgage misconception

Legends face off ahead of blockbuster