Outdoor pools might be open but swimmers can't get a slot

Swimmers have complained of difficulties trying to book in for a swim at one of the few outdoor chlorinated pools that re-opened in Sydney last week.

Following the state government’s relaxation of restrictions, outdoor pools are allowed to open to ten people at a time, and no more than one swimmer per lane. 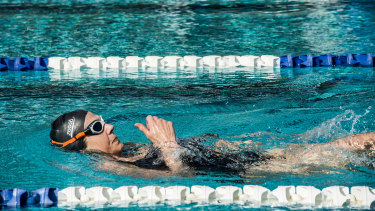 A maximum of 10 swimmers is permitted at Leichhardt Park Aquatic Centre under COVID-19 restrictions.Credit:Steven Siewert

Leichhardt Park Aquatic Centre reopened last Monday, with visitors limited to three sessions a week of no longer than 45 minutes which must be booked online.

A spokeswoman for Inner West Council said it was "challenging" to operate the aquatic centre in line with COVID-19 restrictions: "Most pool users have been understanding and respectful of the constraints staff have been working under."

However, swimmers have expressed frustration on social media about the difficulty in booking a time to swim.

“There has been a very high demand,” the spokeswoman said. “Luckily most users have been patient.”

Gerrit Fokkema has swum twice at the aquatic centre since it reopened, and said it was a delight to swim again after eight weeks.

“It’s a much more calm and meditative thing to swim 30 laps by yourself rather than dodging people at the end of the pool,” he said.

Mr Fokkema said he was able to swim at non-peak times because he is retired: “I imagine if you wanted to go before work, it would be more difficult.” 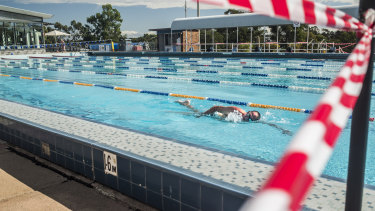 While other outdoor pools across Sydney are re-opening this weekend and next, at least one pool in the city’s west will remain closed after a mayor said COVID-19 restrictions were impractical and unsafe.

Fairfield City mayor Frank Carbone said it was not feasible or safe to reopen the outdoor swimming pool the council operates in winter.

"We don’t want people getting sick because they have to wait until they get home after a swim to get changed."

A council spokesman said it was not practical for swimmers to change in the open in the colder months and a "lack of access to change rooms creates privacy and hygiene concerns".

North Sydney Pool opened on Saturday under a booking system after it passed safety checks.

Outdoor swimming pools at four leisure centres run by the City of Canterbury Bankstown were scheduled to open on Saturday as well.

An online booking system has been set up to allow swimmers to schedule a one-hour visit, which a council spokesman said would be “regulated” to ensure fair access to timeslots.

The City of Sydney plans to reopen Victoria Park Pool in Camperdown and Prince Alfred Park Pool in Surry Hills on June 1.

Ocean pools within Randwick City Council have reopened except for Wylie’s Bath Rock Pool, which is undergoing renovations, and McIver’s Ladies Baths, which is managed by a Trust. Ocean pools at Bondi and Bronte beaches are also open with a 10-person limit monitored by rangers from Waverley Council, but Bondi Icebergs remains closed.

The outdoor pool at the Des Renford Leisure Centre in Maroubra is open for up to eight swimmers who book a timeslot.

A Randwick City spokesman said the restrictions on reopening outdoor pools had presented "some operational challenges".

Ulreich doesn't want to be Bayern's third goalie. He can move to Schalke
Lionel Scaloni: Lautaro will get better playing with Messi. He has a great future, but we need to give everything we can
The reading player criticized Phil Neville: I was hurt by the words that the England team was used as a springboard
Casillas on the best players in the history of Real Madrid: Di Stefano and Ronaldo
Well, have you already learned the Bundesliga heroes in person? Now check!
Kevin-Prince Boateng on racism: The police stop me for no reason. People cross to the other side of the street when I walk
Kevin-Prince Boateng: Why is there no subject about racism in schools? There's math, English, and history
Source https://www.theage.com.au/national/outdoor-pools-might-be-open-but-swimmers-can-t-get-a-slot-20200522-p54vf2.html?ref=rss&utm_medium=rss&utm_source=rss_feed

Obama speaks to soothe nation, as US Army stays put in Washington

How to burn belly fat without exercising

Airlines lose billions of dollars in the oil-market casino

Mums should judge whether 'breast is best' for baby, researchers say

Snap says it will no longer promote Trump’s account

'Most extreme response': China commentary roasts US over protests

Calls mount for JobKeeper to be extended as Australia enters recession

'HMS Bubble': How the Queen is getting through lockdown

Dozens Arrested in Downtown Tampa as Protests Dispersed by Police

Trump administration bans Chinese passenger carriers from flying to US

US protests: What happened overnight

Trump administration 'to bar Chinese passenger carriers from flying to US'

'It does happen here': Calls to address police brutality in Australia

'In many ways, we are on the other side': Qld sees light at end of COVID tunnel

Young homeless thrown off couches onto streets during COVID-19

When gyms reopen, your workout will look very different

Your Daily Horoscope for Thursday, June 4

All lives matter, but some more than others

It's hard not to see the end days of an empire, but America's friends must hope it finds a better path

From the Archives, 1992: The Queen’s loyal subjects go into battle

Loudest voice of retribution and violence is Trump's

F is for frog, not that other word!

Wave of abuse scares Coast surfer from the water