A friend of mine with a long and storied career in homegrown music sent me a cryptic
text a few days back.

It was the photo of a typical Sydney car park: bland and soulless, all concrete and dim lighting, about as inviting as a dental appointment. But upon closer inspection, the street number gave it away. 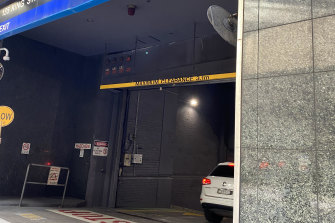 139 King Street, Sydney, the site of the Alberts Studio, known as the "House of Hits". George Young and Harry Vanda recorded here.

It was 139 King Street in the city, the former site of the famed Alberts studio, known as "The House of Hits", where musical maestros George Young and Harry Vanda plied their trade and helped conjure up such classics as Evie, High Voltage, Love is in the Air, Bad Boy for Love, Hey St Peter and dozens more. (At their peak, Vanda and Young weren’t so much in the local charts, they were the charts.)

When I posted the image on social media, I was asked if there was any kind of plaque to
remind drivers that they were entering one of Oz rock’s sacred site. As far as I could tell,
the only plaque visible was the one that displayed parking rates. Another classic
example of Sydney’s tendency to demolish its history. 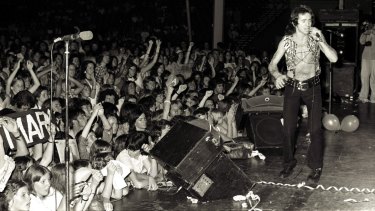 Bon Scott on stage with the band at the Hordern Pavilion in Sydney on December 12, 1976.Credit:L. Thomas

But this is hardly an isolated instance. The former site of live venue the Bondi Lifesaver,
the notorious "Swap", which hosted some of the wildest nights of Oz rock and roll (and
contributed to some of the worst hangovers), is also a car park.

The spot where Sydney’s Stage Door Tavern formerly sat, where I once saw Peter Garrett crack his head on the low-lying pipes and play while covered in blood, is now, of all things, the NSW Licensing Courts.

Most of the suburban pubs and clubs that played a key role in the incredibly vibrant live scene of the 1970s and 1980s, from the Bexley North to the Sylvania Hotel, the Revesby Workers Club to the Sundowner Hotel, are now pokie palaces.

Inner-city room the Basement is now gone, as is the Phoenician Club, where grunge rockers
Nirvana played their first Sydney show as their album Nevermind exploded. And there’s nary a nod to these site’s legendary pasts; not a plaque or a sign or even a splash of graffiti.

It seems like Joni Mitchell was right after all; the denizens of this city really did pave
paradise and put up a parking lot.

Jeff Apter’s latest book is Friday On My Mind: The Life of George Young, out
on August 4.

Klopp, flick and Nagelsmann are up for the best coach of the season award
Lewandowski, Neuer and de Bruyne are up for the UEFA best player of the season award
Totti is close to returning to Roma. He could become Vice-President or technical Director
Juve promised to bring other foreigners to the University, where Suarez took an Italian exam with answers. The case will be referred to FIGC
Bartomeu agreed to let Suarez go to Atletico. The transfer can be made today
Sampdoria player-Greta Thunberg from the world of football: discusses climate issues with Ministers, does not like to fly and is friends with Bellerin
Sergi Roberto: I can't imagine Barca without Messi. He will always give everything for this shirt
Source https://www.smh.com.au/national/oz-rock-s-sacred-sites-fade-to-black-20200804-p55igv.html?ref=rss&utm_medium=rss&utm_source=rss_national

Lawyer caught with cocaine in nightclub

Bont supplants Pendles, no Fyfe, Max gone in this All-Australian side

Extended detention powers are a bridge too far

Swing state: DeChambeau's revolution is here and will continue in November

Jack Billings raring to go after seven-year wait for finals

Magnitude of Qantas exit not lost on Rennie and Hooper

Man charged in Bathurst over alleged importation of firearms

International students could be in NSW by early 2021: NSW minister

International students could be in NSW by early 2021, senior minister says

‘Hey Siri, Where Are the Terrorists?’: Outrage as Apple Assistant Directs Users to Police Stations

Ben Brown told to look for a new home

Safe for NSW to open up to regional Victoria, experts say

Coach poach: Johnson leaves Swans to head back to GWS

Westpac closing in on $1b AUSTRAC settlement

Ministers, and Victorians, in the dark on hotel quarantine decision

Leon Davis says Collingwood must confront the truth about their past

Home smart locks: What you must know

Man charged in Bathurst over alleged overseas importation of firearms

'Imperfect agreement': Unions and employers end months of talks with no deal

'This is not who we are': Shore blames small group of boys for muck-up day scavenger hunt

'This is not who we are': Shore blames small group of boys for muck-up day rampage plans

Accelerating evolution: greater bilbies will be 'trained' to fear cats

'I want to stay to the end': RTS makes one last sacrifice for Warriors

Inside insane portfolios of Friends stars

From third choice to captain, Papenhuyzen shows anything is possible at Storm

South Australia shows the way in reopening borders for NSW

What boys did on evil drug

Is the AFL's Rising Star award too subjective?

Separated by thousands of kilometres and a pandemic, Brutalist forge on

NSW to allow judges to be suspended over 'suspected impairment'

Q&A with Pete Smith, from messenger boy to "entertainment icon"

Crown boss withheld 'daily updates' to Packer from other shareholders

Tom Hardy is the new James Bond? We'll believe it when we see it

Keating: The 'Reverse Bank' has to quickly rediscover the gear stick

Keating: 'Reverse Bank' has to quickly rediscover the gear stick

The 'Reverse Bank' has to quickly rediscover the gear stick

'Late to the party': Keating says RBA is failing the unemployed in scathing assessment

Performers to return to QPAC, with audiences to reach 50 per cent capacity

'This is nonsense': Collins on the attack in first NZ leaders' debate

Fast and Furious car up for auction

Warm days and windy weekend for SEQ after outback drenching