Penn and Teller can still churn stomachs and drop jaws

On stage, Teller communicates solely through facial expressions, hand gestures and the occasional mouthed word. He could have been a silent film star. Penn Jilette, meanwhile, is equal parts Vegas showman and carnival spruiker; he does enough hooting and hollering for the pair of them. It’s an odd couple act for the ages and a dynamic that lights up this high-energy “greatest-hits” romp. 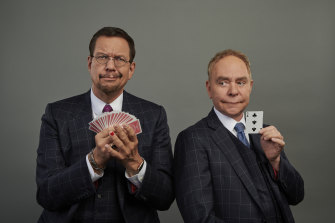 As familiar as some of these tricks are, it’s a giddy thrill to see them in person. Teller’s needle-swallowing, for instance, can be traced back to Harry Houdini and sideshow freak acts, but still has the power to churn stomachs and drop jaws. The exquisite and inexplicable pantomime of Shadows is all his own and a total delight.

There are some crowd-pleasing newer routines as well, like a disappearing chicken bit, complete with the ludicrous misdirection of a gorilla with cymbals. It’s equal parts baffling and funny.

The way they recast old tricks to new ends is often ingenious, like a version of the classic hidden spike trick that puts a blindfolded Teller in the firing line. Similarly, magicians have been doing versions of the cut and restore silk trick (this one uses polyester) for decades, but rarely with this much rousing evangelical fervour.

It’s a show that engages every audience member, with one routine involving each person picking up four random cards on the way in, making choices on how to shuffle and discard them, and all somehow ending in the same place.

The set closer shifts gears with Jilette in poignant, reflective mode, sitting on a stool, casually performing feats of fire-eating and waxing lyrical about his heroes, from carnival performers to scientists. “Mystery is beautiful,” he says. When these giants of comedy magic finally call it a day, that could be their epitaph.