Land sales in Perth have boomed as buyers snap up new lots before government subsidies rolled out during the COVID-19 pandemic end in December.

But it also means Perth's urban sprawl is set to continue, with the mortgage belt suburbs in the fringes of the metropolitan area topping the list as the hottest postcodes to buy new land in. 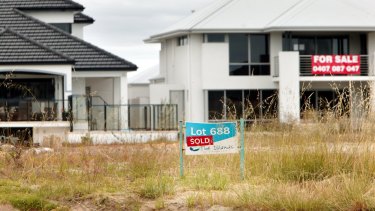 New data released on Tuesday by the Urban Development Institute of Australia shows Perth saw 3322 new lots sold in the June 2020 quarter, a new record according to the property body.

This was a 126 per cent increase from the previous quarter, which saw 1999 blocks sold across the metropolitan area.

Topping the list as the hottest area to buy land in was the City of Swan, in Perth's east, which saw more than 1000 blocks sold between April and June at an average price of $228,000.

Second was the City of Wanneroo, where blocks averaged $215,000.

However, the most affordable metropolitan area to buy new land in was the City of Rockingham, with an average land price of $173,000.

She said government stimulus packages rolled out in response to the COVID-19 crisis had attracted a rush of buyers looking to take advantage of the cash splash before stimulus measures ended.

While demand surged in the last quarter, Ms Steinbeck said prices for new land had remained relatively stable at about $226,400, attracting new home buyers looking to enter the market.

Data from UDIA WA showed new land prices had risen 0.8 per cent in the last quarter, and 2 per cent since the same time last year.

"Comparative to other capital cities in Australia, Perth remains an affordable and stable option for those looking to enter the market," Ms Steinbeck said.

"The tight time frames that the stimulus packages are available has obviously caused a rush of potential buyers seeking new land to build a home.

"The good news is there is still a decent level of supply."

Ms Steinbeck said UDIA WA estimated there were 7500 new lots currently on the market or under construction.

"This is more than enough to meet demand as long as we can get approvals and titles issued in a timely manner," she said.

UDIA WA's land market data is based on an extensive survey of major land developers in Perth.

It's time to learn the names of new Borussia heroes. Now there are 17-year-old boys making goals
Paulo Fonseca: it's Important to bring Smalling back to Roma. We have only 3 Central defenders
Arteta about 2:1 with West ham: Arsenal made life difficult for themselves with losses, but they fought and believed in victory
Palace midfielder Townsend: Could have beaten Manchester United with a bigger difference. We had moments
Philippe Coutinho: I am motivated and I want to work hard to make everything work out well on the pitch
Torres on Chelsea: I Thought I could remain a top player, but I was unstable. Although there were enough successes
Neville on the broken penalty against Manchester United: an Absolute disgrace
Source https://www.theage.com.au/national/western-australia/perth-land-sales-boom-as-home-buyers-ride-the-coronavirus-subsidy-wave-20200804-p55iif.html?ref=rss&utm_medium=rss&utm_source=rss_national