When the siren sounded to mark half-time, this game was shaping as one of the most bizarre matches of an already-extraordinary season. Despite being comprehensively beaten in almost every key stat, 17th-placed Sydney were on track to upset one of the leading premiership contenders.

What happened in the ensuing 50 or so minutes of play reinforced why this may be the Swans' worst season since the dark days of the early 1990s. 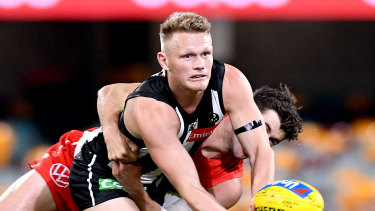 On a night of carnage for Collingwood, the Magpies at least left the Gabba with the premiership points after a vital but unconvincing nine-point win over the Swans - 6.14 (50) to 6.5 (41).

The victory has come at a heavy price for the Magpies, who finished the game with just one fit player on the bench after losing Will Hoskin-Elliott, star midfielder Adam Treloar and exciting youngster Isaac Quaynor to injury.

The most serious appears to be the leg injury suffered by Quaynor. The match was stopped for several minutes deep into the last quarter as the second-season defender was transported off the Gabba.

It was unclear from the replays how the youngster was hurt but the care in which he was treated by medical staff, who were holding his leg, suggested the injury was serious.

Hoskin-Elliott limped off in the first term after Jordan Dawson accidentally fell across his right knee in a marking contest and did not return. Nor did Treloar, who headed down the race in the third quarter.

It adds to an already crowded casualty ward for the Magpies, who were without skipper Scott Pendlebury and their best player at either end of the ground Jordan de Goey and Jeremy Howe.

It took a miracle intervention from the son of a gun, Josh Daicos, in the dying minutes to shake off the gallant Swans. Daicos' snap from the boundary was the equal of the many his father Peter kicked during his decorated career.

The young Swans led by 14 points seconds before the long break but a true set shot by Jamie Elliott after the siren sparked a run of four unanswered goals.

Against the grain, perhaps due to the Magpies' injury toll, the Swans came back in the last term but will rue missed shots from Sam Reid and Tom Papley.

That the Swans were still in the game until the final minutes was a reflection of the Pies' wastefulness with the ball, and not just in front of the big sticks. In truth, the margin should have been significantly more.

It was mission accomplished for Nathan Buckley's men but this was not the performance of a side tipped by many to challenge for the flag.

The Pies smacked the Swans in the clinches, winning the clearances 34-24 and the contested possession count 134-108, while the inside 50 count was also lopsided (50-33). But their ball use was shoddy, and their goalkicking frustrating. A better side would have made them pay.

The Swans can be proud of the resilience they showed under constant attack but lack the polish and composure to win regularly.

There will not be much to cheer about in terms of wins but as long as their youngsters keep improving they can be optimistic for the future.

The most impressive was Dylan Stephens, who though a long way from the finished product is already indicating why the Swans used their prized No.5 pick on him.

His preparedness to take the game on is consistent with the verve and dare the new-look Swans are attempting to play with. His fast play on and raking left foot set up a goal for James Bell in the second term and minutes later he found one for himself despite heavy attention from Brayden Sier.

The referee cancelled out Bayern's goal against Sevilla after VAR. Lewandowski was out of the game
Mostovoy about the departure of Rostov: Money debauchery plays a cruel joke. Maccabi knocked out the millionaires
Godin moved from Inter to Cagliari
Head Of Atletico: Bartomeu will be one of the great presidents of Barca. History will prove him right
Referee Taylor awarded a penalty to Bayern for Alaba's foul on Rakitic. Ocampos scored
Another night when we are not at ease: A sad picture of the fall of Rostov in European competitions
Valery Karpin: Rostov, having scored a goal, got hooked psychologically, stopped pressing. In the End, there were no forces
Source https://www.smh.com.au/sport/afl/pies-down-swans-but-win-comes-at-heavy-cost-20200806-p55jbw.html?ref=rss&utm_medium=rss&utm_source=rss_feed

Preference flows 'out the window' as minor party posturing begins

Growing under glass? Why germinating veggie seeds is just the start

'Shame on each of you': China, Russia and US clash over pandemic responses

'It's a real tough day': Brett Lee returns to TV hours after trying to save Dean Jones

Why the Bennett circus is becoming a distraction for Souths

Labor's failure to back workers on gas is not just morally indefensible, it’s strategically moronic

Theatres to increase audience numbers as restrictions ease in NSW

On that night, Cathy Freeman gave us more than gold

From the Archives, 1967: Boost to Australian-Italian immigration

Tax reform and open borders: the budget needs to get people working again

Your Daily Horoscope for Friday, September 25

Dilemmas of a feline tantrum

Hardening up: How AUSTRAC became the toughest cop on the beat

Bride stole from boss to pay for $60k wedding

Scott Hillier: How to catch a Mangrove Jack

Coast tourism soars to new heights with flights to Canberra

'Easy thing to do is nothing': Players to take stand against racism

'Temptation was too great': Grigorieva had the best seat in the house for Freeman's gold

Winning isn’t everything: how you win matters, too

Diverse representation matters and we need more of it

'Jane was a sweetie, and the life of the party': Claremont victim's sister says killer must never get out of jail

'Deano's' passing will leave the cricket world a greyer place

Many points, most blunt

'Rugby league saved my life': Badger bows out with message of hope