When you think of The Go-Go's, the all-girl five-piece band from Los Angeles that bounced into the charts in the early 1980s with We Got The Beat and Our Lips Are Sealed, groundbreaking may not be the first word that comes to mind. Their music was fun, sunny, effervescent – but groundbreaking?

Well, yes, actually. As the eponymous documentary on the band screening at the Melbourne International Film Festival convincingly argues, as the first all-female outfit to write their own songs, play their own instruments and to land a number-one album in the US (their 1981 debut Beauty and the Beat sat atop the Billboard charts for six straight weeks), that’s an entirely reasonable claim – even if a berth in the Rock & Roll Hall of Fame remains elusive. 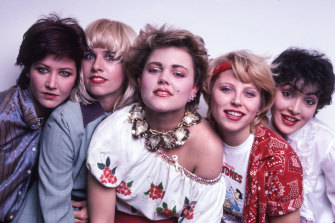 "We have often felt somewhat overlooked," says Go-Go's bass player Kathy Valentine down the line from LA. "You often read stories of 'women who rocked' and we're barely given any print at all. But we have an accomplishment that is an absolute thing, we have a small but very legitimate place in pop music history, we did something that hadn't been done before.

"So we were really happy with this film to have something that took the legacy off the shelf and dusted it off."

For director Alison Ellwood – born in Melbourne, raised in the US and Britain, and a frequent collaborator with documentary powerhouse Alex Gibney – the band's journey from the LA punk scene in 1978 to international stardom by 1982 and acrimonious implosion two years later had both a compelling narrative arc and a point of difference.

"It's a rise and fall, it's a classic rock story, but it happens to be with this group of women who have this dynamic sisterhood between them, which I thought was fascinating."

Ellwood was initially approached by Go-Go's management to make the film, but it took almost a year to convince the band members – Valentine, Gina Schock (drums), Charlotte Caffey (lead guitar), Jane Wiedlin (rhythm guitar) and Belinda Carlisle (vocals) – to do it. 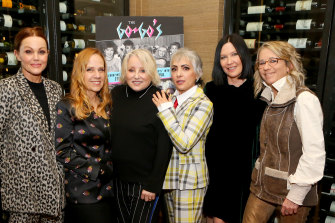 They were "pretty gun-shy", says Ellwood, because they'd been burnt by a VH1 Behind The Music special made 20 years ago.

Ellwood's film tells a much more rounded story but doesn't skimp on gruesome details either. There's pixie-voiced Wiedlin talking about her brief affair with Schock, for instance, after which the camera cuts to the drummer, looking slightly, well, shocked.

"We were girlfriends for a while," she says. "She was the boss in the relationship … Jane broke off with me." She looks sullen, then suddenly breaks into laughter. "It wasn't like either one of us was heartbroken or anything. You think something like that's gonna f--- with the band? No way."

More serious was the escalating drug use – Valentine learnt to play the band's songs on a three-day cocaine bender, Caffey admits she was a "full-blown heroin addict", and Carlisle used cocaine heavily for years, though says she has been sober since 2005. 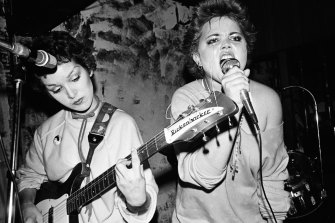 The film confirms that the Go-Go's were a real band, formed in the crucible of punk, indulging in all the vices and being brutally ruthless when necessary. Schock was recruited while original drummer Elissa Bello was still with the band, and Valentine was drafted in while founding bassist Margot Olavarria was sick. Just like many real bands, they split up over artistic differences and money.

"People automatically assume that we were probably put together by some guy, but we did it all ourselves," says Carlisle in the film. "We saw no reason why we couldn't be just as good as the boys or men. We weren't going to be anything but a great band."

Not immediately, though. When they started out, they could barely play. "It was DIY and if you were terrible, it was cooler," says Carlisle.

"It was pretty screechy," adds Ginger Canzoneri, the woman who would become their manager, at one point selling everything she owned to get the band to England. "I just thought, 'Oh God, that's so great, women pulling together to achieve something'."

Canzoneri would later be dumped as the band opted for someone "more professional", a move that didn't work out. "We should have just stayed with Ginger," says Wiedlin in the film; Canzoneri, meanwhile, chokes up when she recalls being dropped nearly 40 years earlier.

Being young, female and photogenic was both an asset and a liability. It helped get their clip for We Got The Beat – made for $6000 left over from the budget for a clip for The Police – on high rotation on MTV. But it also confined them to the ranks of bubblegum pop in the eyes of many in the industry.

"I think women are just generally overlooked," says Ellwood. "Their musicianship and their skill as songwriters I don't think has ever been fully appreciated."

Even so, she insists making a case for their inclusion in the Hall of Fame was never her intention. "In fact, while I was editing last October, I was fully prepared to take out the comments about them not being in the Hall of Fame because I thought of course they're going to be inducted.

Valentine agrees. "It came up, but I'm not sure it needed to come up. Absolutely we made history, but a lot of women have. Suzi Quatro should be in the Hall of Fame – I wouldn't be a musician if it wasn't for her.

"Fanny [one of the earliest all-female groups to chart with their own material] should be in the Hall of Fame. It's a museum, its job is to educate and inform about history, and I do think the lens through which they look at women should be a bit different than sales and stuff, because it's our history, it's women's history in music."

But for Valentine, the heart of the Go-Go's story lies elsewhere, in the enduring power of the relationships formed in the crucible of a rock 'n' roll band, bonds that not even being sacked from the band (as she was) or suing them (as she did) can diminish.

"It's very much like a family or a marriage," says Valentine, who is now back in the band and would be playing their rather terrific new single Club Zero on tour right now had COVID-19 not got in the way. "People take betrayals and they harbour hurts. It's just part of relationships."

The film captures that, she says, but for the band members, it also does so much more. It's brought them closer together.

"We've had so many ups and downs over the years, disagreements and problems and issues, but there's a bond and an endurance there," she says. "Seeing the whole picture really facilitated a degree of healing and forgiving I was not expecting."

The Go-Go's screens at the online-only Melbourne International Film Festival, until August 23. Detals: miff.com.au The Age is a festival media partner.
Follow the author on Facebook at karlquinnjournalist and on Twitter @karlkwin

Arteta on Manchester City in the League Cup: Arsenal are not very lucky with the draw. This is another test
Klopp about losing to Arsenal and Liverpool in the country of dreams, you have to score. Last pass failed
Muller held the UEFA ceremony in the stable. There had Neuer, Kimmich and Evangeliski
Liverpool 4 seasons in a row, cannot get past the 5th round of the League Cup and 2012 wins the tournament
Leno - first Arsenal goalkeeper in 8 years not to miss at Anfield
Drogba's friend came to Lazio from Serie B. Fans jokingly call him the new Kante and blame bosses for weak transfers
Barca defender Langle removed in the first half of the match with Celta for two yellow cards
Source https://www.smh.com.au/culture/movies/pioneering-female-rockers-still-go-going-strong-despite-everything-20200812-p55l05.html?ref=rss&utm_medium=rss&utm_source=rss_feed