Tangara School for Girls will not be charged for any breaches of COVID-19 protocols after a coronavirus cluster associated with the school expanded to 21 cases on Friday.

The school community has been asked not to speak to the media but one Tangara parent anonymously reported alleged breaches of COVID-19 protocols to radio station 2GB.

The parent told host Ben Fordham on Thursday morning that weekly primary school choirs were still being held without social distancing and compulsory Mass had continued, with students and teachers taking communion.

In a letter to the school community, Tangara principal Rita Sakr said the school had observed NSW government guidelines leading up to, during and after lockdown and had not held extracurricular activities or camps since March. 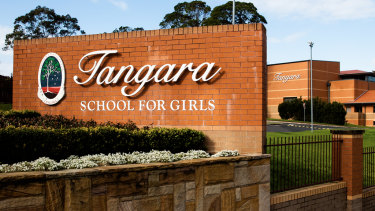 Police will not make any charges relating to the Tangara school cluster. Credit:SMH

"We have always followed the advice of NSW Health around COVID-19 and will continue to do so," she said.

At least 12 senior school students and one teacher are among those associated with the school who have now tested positive for COVID-19.

Police have charged two people with spitting, while another seven $1000 fines have been issued in recent days to people for breaching coronavirus public health orders.

In April, NSW Health Minister Brad Hazzard authorised an addition to the 2010 Public Health act, which aimed to stamp out "intentionally spitting at or coughing on public officials in a way that is reasonably likely to cause fear about the spread of COVID-19."

Police said that on Wednesday morning, a 14-year-old boy, who appeared to be intoxicated, boarded a bus at Lane Cove despite being told not to by the driver, who then called police.

The teenager allegedly then punched the driver in the head and spat in his face.

In a separate incident, police were called to home on Spit Road in Mosman on Thursday evening to assist paramedics.

They allege that, while in the back of the ambulance, a 23-year-old woman spat in the face of two police officers and paramedics, and that she bit the finger of a male officer.

She was released from hospital several hours later and charged with assaulting police and a spitting offence.

A hotel on Darling Street, Balmain, was issued a $5000 public infringement notice (PIN), for allegedly throwing a party for 30 people on Saturday.

The licensee of a hotel at Macksville has also been issued with a $1000 fine after local officers identified potential breaches during a visit last week. They said that a follow-up check revealed the breaches were not addressed, resulting in the fine.

A licensee of business on Morgan Street, Wagga Wagga, was fined $1000, for failing to implement a COVID-19 safety plan.

A 45-year-old man from South Kempsey and a 21-year-old woman from Guildford were both fined $1000 for breaching their two weeks of self-isolation, and a Victorian couple, aged 38 and 43, were each fined $1000 for travelling from Victoria without complying with the conditions of their permit.

Meanwhile, the special commission of inquiry into the handling of the Ruby Princess outbreak commissioned by the NSW government has found several “serious errors” were made, leading to an "inexplicable" and "unjustifiable" decision to deem the ship low risk.

The inquiry report, handed to the NSW government on Friday afternoon, found NSW Health’s expert panel made a “serious and material error” when it conducted its risk assessment of the Ruby Princess on March 18 - a day before it docked in Sydney with COVID-19 positive passengers on board, who were allowed to disembark. 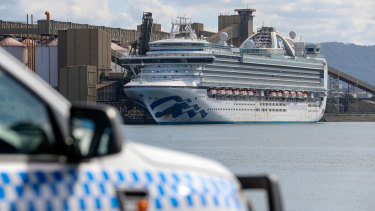 NSW Health was criticised for its handling of the Ruby Princess crisis. Credit:Edwina Pickles

NSW has reported nine new COVID-19 cases on Friday, prompting authorities to upgrade warnings for those who attended two venues in Sydney's west.

There were six new locally acquired cases recorded in NSW the 24 hours to 8pm on Thursday, including one case with no known source, a second worker at Dooleys Lidcombe Catholic Club and a third staff member at Liverpool Hospital.

It's the second consecutive day of single-digit community transmissions in NSW. It's an encouraging sign as health authorities continue to urge anyone with the mildest of symptoms to come forward for testing as they attempt to detect the chains of transmission for a smattering of mystery cases.

On Friday, Victoria recorded 372 new cases and 14 deaths including a man in his 20s. Victorian Chief Health officer Brett Sutton said he expected the state's death rate to start "levelling off" as the case numbers stabilise.

The Tangara School cluster has grown to 21, with one more student testing positive for the COVID-19 virus SARS-CoV-2.

Overnight an additional case was identified in a student at St Vincent’s College in Potts Point. The school is today closed for deep cleaning while investigations and contact tracing are under way.

The detection of the second case among staff at the Dooleys Lidcombe Catholic Club has prompted NSW Health to reclassify anyone who attended the venue at the following times as close contacts, who must self-isolate for 14 days, get tested for COVID-19 and monitor their health.

Close contacts must remain in isolation for 14 days after they last attended the club, even if they test negative. 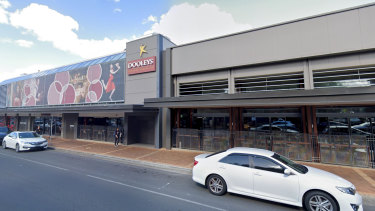 Testing is available at a drive-through clinic at Auburn Community Health Centre and at Auburn Medlab Pathology.

Three Liverpool Hospital staff members have tested positive for COVID-19. They are in isolation and all close contacts have been identified and advised to isolate.

The first staff member detected with COVID-19 is linked to a known cluster. The contact tracing team is continuing its work to identify how the other two staff members acquired the coronavirus.

There is no evidence that there is an ongoing risk in the hospital, and patients should continue to visit to receive the medical care they need, NSW Health said.

People who were at Liverpool Hospital on August 6 from 7am to 3pm, August 7 from 7am to 3pm, and August 8 and 9 between 5am and 1.30pm are advised to monitor for symptoms and get tested should even the mildest symptoms develop.

NSW Health's Dr Jeremy McAnulty said as COVID continues to circulate in the community maintaining high testing rates is vital. He urged anyone with the mildest of symptoms to come forward for testing.

There are 131 COVID-19 cases being treated by NSW Health including six people in intensive care units, of whom five are ventilated.

There were 29,696 tests carried out in the latest 24-hour reporting period.

Of the known clusters, there are now:

Jose Mourinho: what happened to Dyer is not normal, he was dehydrated. If the League management doesn't care about the players, I don't
Jose went berserk twice during the match with Chelsea: ran over Lampard and ran to look for Dyer - he rushed to the toilet right during the game
Lampard on relegation from the League Cup: we Need to keep a positive attitude. Everything will come if Chelsea score second, leading the score
Call of nature, what can you do? Dyer explained why he ran to the dressing room during the match with Chelsea
Mourinho and Lampard shook hands before the penalty shootout. In the first half, they had a fight
Dest arrived in Spain to complete a transfer to Barca
Lionel Messi: I Am responsible for my mistakes. I wanted Barcelona to become stronger
Source https://www.smh.com.au/national/nsw/clusters-linked-to-sydney-school-liverpool-hospital-and-lidcombe-clubs-grow-20200814-p55lqb.html?ref=rss&utm_medium=rss&utm_source=rss_feed

'Simply made sure': Minister defends sports grants after auditor report

Sheedy to join Essendon board

Complex, quirky, confounding: How does voting for the US president work?

Healthy gut, improved mood? The link between your microbiome and mind

Great expectation: New Matildas boss will have to deal with heavy burden

As the rest of the world limps along, China’s economy is surging

Japan photo creeps the world out