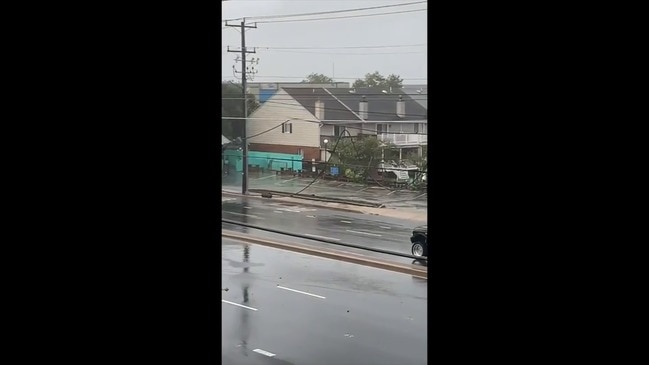 Tropical Storm Isaias brought gusty winds to Ocean City, Maryland, and knocked out power for thousands as it moved up the East Coast on Tuesday, August 4. The National Weather Service said wind speeds were reaching 60 to 70 mph and “numerous” tornadoes have been reported near the Chesapeake Bay area. These videos show rain and wind lashing Ocean City as downed electrical wires hang along the Coastal Highway. Delmarva Power, an electric company that serves Delaware and Maryland, reported that 66,948 customers had lost power as of Tuesday morning. Credit: Georgia Warren via Storyful

Barcelona's Interest in Isak Increased after Koeman's appointment. Larsson has a high opinion of the player (Mundo Seportivo)
Manuel Pellegrini: When you play against Real Madrid and var, it's too much
PSV and Porto are Interested in Barcelona midfielder PUC. He doesn't want to leave the club
Puyol about Barcelona: If we want to win the championship, we need to perform very well
Schalke sacked Wagner. The team has not won the Bundesliga since January
Iacini on 3:4 with Inter: Even a draw would be an unfair result, given how many chances Fiorentina created
Ramos Pro 3:2 with Betis: the Referee tried his best and didn't do anything intentionally
Source https://www.news.com.au/national/power-outages-reported-as-tropical-storm-isaias-impacts-eastern-maryland/video/a65c205ce0e4dc6ab09d6f0bccf84ad9