The next generation of Australian playmakers will pit themselves against their experienced heroes in the opening round of Super Rugby AU this weekend.

Waratahs five-eighth Will Harrison will have his composure tested by veteran Queensland utility James O'Connor at Suncorp Stadium on Friday night and hyped Brumbies No.10 Noah Lolesio will stare down old stablemate Matt Toomua, who will wear the No.10 jersey for Melbourne in Canberra on Saturday. 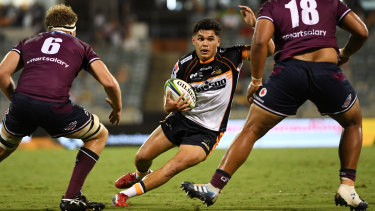 In a competition that doubles as a 12-week glorified Wallabies selection series, the battle for the Test five-eighth role will be one of the most contested.

Toomua has the strongest claim on incumbency after the departures of previous rivals Bernard Foley and Christian Lealiifano, but a strong showing from O'Connor this season would give new Wallabies coach Dave Rennie pause for thought.

Rennie could also look to Lolesio and Harrison, both of whom have starred for the Junior Wallabies, while Force playmaker Jono Lance will want to remind people he hasn't returned home from overseas just to make up the numbers.

If he gets quick ball and is allowed to flatten up and bring his running game into it, he's a dangerous player.

Saturday's Canberra showdown has an extra dimension given Toomua played 88 of his 99 Super Rugby games with the Brumbies.

In the teams' round two showdown back in February, it was the young gun who showed up his former teammate.

"[It] was probably one of his better games and, fair play, they outplayed us and he outplayed me that game, he was great," Toomua said.

"Me being part of the Brumbies for so long and then seeing him develop, you see they develop their players right, particularly in that position.

"He doesn't play the role where there's heaps of pressure mounted on him. He has a dominant forward pack, he plays his role very nicely, and he attacks where he needs to. It's a really good development example for young halves." 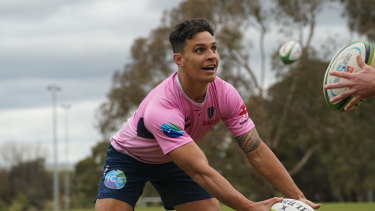 Matt Toomua at Rebels training before the Super Rugby AU opener against the Brumbies. Credit:Melbourne Rebels

No one is expecting a 47-Test Wallaby to settle for a repeat of February's 39-26 loss lying down. Brumbies coach Dan McKellar said Toomua's versatility made him a threat.

"He's an important player of theirs ... he was good for them in their last couple of games against the Highlanders and the Lions in particular," McKellar said.

"If he gets quick ball and is allowed to flatten up and bring his running game into it, he's a dangerous player, so we need to make sure we defend well and limit those opportunities."

Lolesio is the bolter for the prized Test jersey after an assured start to the first Super Rugby iteration.

McKellar was keen to keep a lid on the hype around his 20-year-old playmaker.

"We keep him grounded. He's had some good publicity and he's at the start of his career. Great players aren't made off the back of half a dozen good games," McKellar said.

"But he keeps himself grounded, he's got a work ethic and an attitude where he just wants to get better and better. It's great when any young player comes in and performs at this level, he's had some learnings as well over the first seven weeks of Super Rugby.

"But he knows he's just getting his career started. He's had a good block now to work on his individual game and understand that he belongs at this level and he'll be ready to step up again."

The forward battle will determine who has the easier night in Canberra, with the Brumbies fielding an all-Wallaby front row in James Slipper, Folau Fainga'a and Allan Alaalatoa, with a fourth Wallaby, Scott Sio, off the bench. No.8 Pete Samu will also be hoping to reprise his damaging pre-COVID form.

Thomas Tuchel: If both legs were intact, you could have seen my 40-meter sprint
PSG saved Tuchel's pet: Choupo-moting got everyone for free, managed not to score from a centimetre, and now pulled Paris to the semi-finals of the Champions League
Gian Piero Gasperini: The worst part is that we were so close. I can only thank the guys
Neymar was the player of the match Atalanta-PSG. He gave an assist
ПС PSG suffered through the entire quarter-final and turned it over in 149 seconds. Lifted the Italian curse and went so far in the Champions League for the first time in 25 years
ПС PSG's pain was transformed into happiness: in three minutes, the suffering stars turned into celebrating kings
The club from Italy won't win the Champions League for the 10th year in a row. This is an anti-record
Source https://www.theage.com.au/sport/rugby-union/pup-and-the-baby-toomua-and-lolesio-face-off-in-wallabies-preview-20200702-p558i0.html?ref=rss&utm_medium=rss&utm_source=rss_feed

Yet another NRL coach sacked

How to catch trevally or queenfish: Scott Hillier