A nine-year-old Indigenous boy with dwarfism is suing News Corp columnist Miranda Devine for defamation over tweets suggesting he pretended to be a victim of bullying in a viral online video.

Quaden Bayles' mother Yarraka filed Federal Court proceedings on July 31 on his behalf, and is also suing Devine and her employer in her own right.

Quaden, who has achondroplasia dwarfism, attracted a groundswell of support in February – including from the NRL's Indigenous All Star team – after Yarraka posted a video of him in distress after he was bullied at school.

In the video, a distraught Quaden says, "I want to die right now."

The video attracted global attention. US comedian Brad Williams, who also has achondroplasia dwarfism, set up a GoFundMe page to fund a trip to Disneyland for Quaden and Yarraka. The family declined to take the trip.

At the centre of the defamation case is a February 21 tweet by Devine, a columnist at The Daily Telegraph in Sydney on secondment at The New York Post, and two replies on February 22. 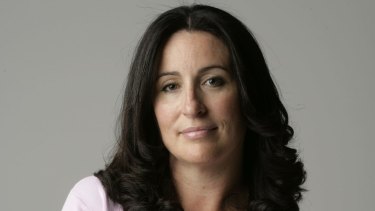 In the initial tweet, Devine re-tweeted a post by American twitter user Paul A. Szypula, who has the username "Bubblebathgirl". He alleged Quaden was an "Australian actor whose mom ... posted a fake sobbing video of him" and "the MSM [mainstream media] and Hollywood fell for it and got him $300K+ in donations".

In a comment above the re-tweet, Devine wrote: "That's really rotten if this was a scam. Hurts genuine bullying victims. Over to @dailytelegraph." 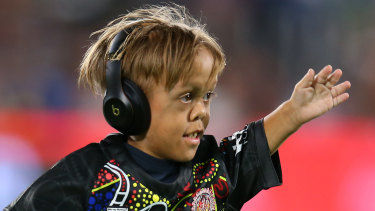 Quaden Bayles runs onto the field before the NRL match between the Indigenous All-Stars and the New Zealand Maori Kiwis All-Stars in February.Credit:Getty Images

Another user thanked Devine for "sharing and finding out the truth", saying "I just can't grasp how truly evil this is".

Devine replied: "And coaching the kid to say those things that no nine year old would say."

The same user replied "it's a crime if it is a scam. Child abuse. How could any parent do this?"

Quaden's lawyers, Sydney barrister Sue Chrysanthou and law firm Centennial Lawyers, say the tweets defame him by suggesting he "dishonestly acted out being distressed in a video to obtain money from donors" and "dishonestly pretended to have been the victim of bullying, thereby hurting genuine victims of bullying".

Yarraka was also defamed, they allege in court documents, because the tweets suggest she posted the video "knowing it falsely depicted him as being distressed, to get donations" and "dishonestly coached her son to pretend to be distressed to get donations".

The subsequent tweets suggested she "engaged in child abuse" by "dishonestly [coaching]" her son, they say.

The family's lawyers allege both Devine and her employer, News Corp's Nationwide News, are liable as "publishers" of the tweets including the re-tweeted material.

If the court ruled Nationwide News did not publish the tweets, the family's lawyers say the company should in any case be held vicariously liable for the conduct of their employee in publishing it.

The family is seeking damages, including aggravated damages, and an injunction to restrain similar publications.

Their lawyers say the harm to the family was aggravated by a range of factors, including a response from Nationwide News on March 25 in which the company denied responsibility for Devine's Twitter account and said it was "self-evidently a personal account ... published by Twitter".

Devine and her employer are yet to file a defence. On February 26, Devine tweeted that she re-tweeted the initial material with "caution" and the Telegraph's subsequent story, retweeted by her, was "wholly sympathetic to Quaden".

She suggested there had been a "disinformation campaign about my Quaden Bayles tweets".

It's time to learn the names of new Borussia heroes. Now there are 17-year-old boys making goals
Paulo Fonseca: it's Important to bring Smalling back to Roma. We have only 3 Central defenders
Arteta about 2:1 with West ham: Arsenal made life difficult for themselves with losses, but they fought and believed in victory
Palace midfielder Townsend: Could have beaten Manchester United with a bigger difference. We had moments
Philippe Coutinho: I am motivated and I want to work hard to make everything work out well on the pitch
Torres on Chelsea: I Thought I could remain a top player, but I was unstable. Although there were enough successes
Neville on the broken penalty against Manchester United: an Absolute disgrace
Source https://www.theage.com.au/national/quaden-bayles-sues-miranda-devine-for-suggesting-bullying-was-scam-20200805-p55ipq.html?ref=rss&utm_medium=rss&utm_source=rss_feed