However the rate remains at an almost 20-year high in the state, as part-time work dominated job growth and more people began searching for work amid easing restrictions on travel and businesses. 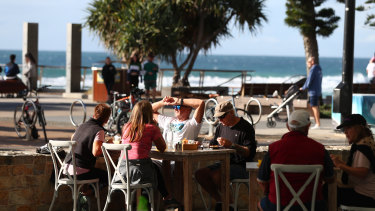 People dine in at Surfers Paradise as restrictions eased to allow some venues to reopen in May.Credit:Chris Hyde/Getty Images

Updated labour force data from the Australian Bureau of Statistics reveals Queensland saw the second highest increase in employment behind New South Wales last month, up 52,900 people from May.

This was driven largely by a rise of almost 43,000 part-time equivalent jobs, offsetting the drop in full-time roles.

The state's unemployment rate dropped 0.1 points to a seasonally adjusted 7.7 per cent after surging from 5.6 per cent in the first two months of the year. This represents the highest figure since June 2002.

A further 1400 Queenslanders were looking for work last month, taking the total number to 201,700.

Nationally, the official unemployment rate rose to 7.4 per cent despite the addition of more than 200,000 jobs — also largely part-time — with the Northern Territory the only other state or territory to record a decrease.

The effective number of people out of work is considered likely to be closer to 13.3 per cent, with people not actively looking for work not counted in the labour force figures.

The federal government's JobKeeper scheme, which allows employers to stand down staff while keeping them on the books, also skews that rate.

A state government spokesperson pointed to the fact that Queensland was one of only two states that did not record an increase in its unemployment rate.

"Queensland has an economic recovery plan which is all about jobs," they said.

In a statement, LNP deputy leader and shadow treasurer Tim Mander said the state had some of the nation's worst unemployment figures even before the coronavirus pandemic hit.

"This is a damning indictment of Annastacia Palaszczuk's economic credibility," Mr Mander said.

Lopetegi about éver Banega: When he plays well, the whole of Seville plays well
Sanchez received 7.5 million pounds from Manchester United for terminating his contract
Javi Martinez is Interesting to Renn. The club will play in the Champions League
Fonseca Pro 0:2 with Sevilla: Roma deserved to lose
Manchester United are ready to sell Lingard. He has scored in the last two matches
Dzeko Pro 0:2 with Sevilla: Roma never got into the game
Sergio Region: Sevilla are determined to win the Europa League. We want to win everything we can
Source https://www.theage.com.au/national/queensland/queensland-bucks-unemployment-rate-rise-with-more-still-out-of-work-20200716-p55cm4.html?ref=rss&utm_medium=rss&utm_source=rss_national