Only one of the 75 new Queensland trains that failed to meet modern disability access standards has been modified to meet the requirement, eight months into a $335 million contract.

Now disability access and rail commuter groups are questioning the pace of modifications and asking if another “rail fail” looms as the October state election nears. 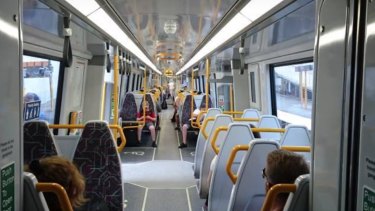 Only one of Queensland's 75 new trains has had the aisles widened and a second, larger toilet added for people in wheelchairs.

The Queensland government in January 2019 set aside $335 million to add a second toilet to the trains, make the toilets 10 per cent larger, improve internal seating and improve signage after an inquiry found the new trains, built under a $4.4 billion contract, did not meet disability access standards.

The New Generation Rollingstock project began and stalled in the later years of the Bligh government, was revived by the Newman government, which ordered non-compliant trains from overseas to save money, before it became a political hot potato during the first term of the Palaszczuk government.

People using wheelchairs could not fit into the toilets, the aisles in the NGR trains were too narrow for wheelchairs, while in other problems train drivers complained they could not see the train properly.

The contract to improve disability access in the 75 six-passenger carriage sets was awarded in January 2019 to Downer EDI in Maryborough, to be completed by 2024. 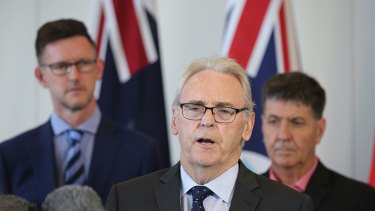 The Queensland government gave Downer a further $10 million to expand its Maryborough plant to modify the trains.

The Transport and Main Roads website confirms only one train has been updated.

The first train arrived in Maryborough in October 2019.

Brisbane Times questioned the pace of work and was told that “at its peak, up to eight NGR trains will be upgraded at once at Downer’s Maryborough plant”.

However neither Downer nor the government would outline how long it would take to modify each six-passenger car train, if extra staff are needed and whether the COVID-19 pandemic had slowed work.

Transport Minister Mark Bailey declined an interview, issuing a statement that the government had a contract with Downer that all 75 six-car carriages would be modified by 2024.

"Transport and Main Roads, who are managing this contract, have advised that the consortium is on track to meet that deadline and they have also advised that there are no significant delays to the timetable for the work to be completed in Maryborough due to the COVID-19 pandemic," the statement said.

"We always expected the first upgraded NGR train would be back operating on the Queensland Rail network this year and we’re on track for that."

"The Palaszczuk government provided $10 million to Downer so it could upgrade facilities that would allow it to work on up to eight NGRs at a time," he said.

"They are now getting ready to ramp up work as part of the $335 million NGR contract."

However, Geoff Trappett, a Paralympic athlete who formed disability advocacy group Inclusion Moves, said he was concerned at the apparent lack of progress.

“The fight for best-practice inclusive transport is far from over and I encourage each and every citizen of Queensland to ensure they hold the government of the day to their commitments," Trappett said.

“With a state election around the corner, it is projects like these that the disabled community will be looking to for surety that their rights as full citizens will be upheld.”

Under the plan, up to eight trains would be withdrawn from the CityTrain fleet of 135 trains and modified in Maryborough.

“People don’t like the three-car sets because they get congested,” he said.

Queensland Transport said taking eight trains and six-car carriages out of the CityTrain fleet would have no impact.

Messi-Casillas: you are an incredible goalkeeper. It was a beautiful rivalry that made you overcome yourself
Ferran Torres: Ronaldo was the best. He is an example for everyone who wants to achieve the maximum in football
Barcelona cannot agree with Ter Stegen on a new contract. The goalkeeper wants to stay
We found out how the fascinating logo of Iceland appeared: Game of thrones has nothing to do with it, the source of audacity is the success of the national team
Ronaldo-Casillas: Proud that we shared great moments
Bayern want to sell Boateng in the summer. The club has no offers yet
Solskjaer on the Europa League: a Trophy would be a big step forward for Manchester United. We want to win something
Source https://www.theage.com.au/politics/queensland/queensland-s-4-4b-trains-failed-to-meet-standards-only-one-is-fixed-20200713-p55bln.html?ref=rss&utm_medium=rss&utm_source=rss_feed