A quest for quality in equity markets globally is driving investors to pick up technology stocks and it’s a trend Nitro co-founder Sam Chandler says is here to stay as digital become the default for consumers and businesses.

"In a pandemic situation like this combined with a financial crisis they are probably some of the best companies out there at least on a relative basis," he said.

"I think what you're seeing in many equity markets is a flight to relative quality." 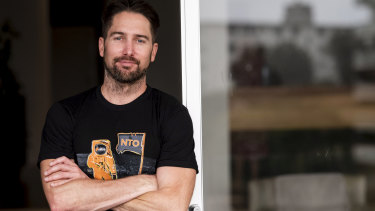 Sam Chandler, the co-founder of technology company Nitro, is based in the United States.

According to Mr Chandler, the pandemic has allowed technology companies to showcase the benefits of catering to a global audience, their focus on recurring revenue through subscriptions and the ability to operate effectively remotely.

"I also think there's this trend towards digitisation , which is now a necessity not a nice to have, and we are benefiting from that."

For ASX-listed Nitro, which offers digital document management services, investor appetite for tech stocks has been a boon.

Valued at $345 million Nitro has seen a greater takeup of its products during the pandemic, helping it to clawback ground lost after a lacklustre IPO in December. Landing on the bourse at $1.72 a share, Nitro’s share price almost halved in the subsequent months to a low of 95 cents in late-March.

However, it has since slowly climbed back close to its listing price and Mr Chandler said the business models of technology companies were now better understood by the market.

With median revenue multiples of the current crop of technology companies not much higher than their long term average, he added that a dot-com era bust was unlikely.

"If a bubble is around specifically that traditional definition of an asset price valuation that's brittle and could be popped at any time, whether it's tulips or or tech stocks, I don't think that's where we are," he said.

With the benefit of hindsight, Mr Chandler said listing last year was good timing for Nitro.

"When we were thinking about capital raising one of the things in the back of our head was 'Well, you just don't know what's going to happen with the world'," he said. "So it's always good to raise money to grow while you can and so we were very fortunate in that respect in that we were able to execute an IPO before the pandemic hit and the ensuing financial crisis emerged."

He said listing on the ASX had also been the right move despite a lack of software company subject matter expertise in the local investment community.

"One of the great things about the ASX is you've got six monthly reporting cycles, not quarterly so you can actually take a longer term view," Mr Chandler said.

He added that the dominance of superannuation fund money on the exchange also gave it a more long term perspective and listing on the ASX was less costly in terms of compliance than the NYSE or the Nasdaq.

"It’s an efficient more long term way to go public when you are our size," he said. "For us it's actually a really good fit. There's tonnes of capital, good investors, good liquidity and enough tech stocks now that it's building a reputation."

In 2008, an Asian Leopard was built in Uzbekistan. Even Rivaldo came and paid the team out of his own pocket a year later
Borussia Dortmund can rent Reinier from Real Madrid
Loko fans about support at matches: we Consider it a mistake to remain silent about disagreeing with the management's policy
Ex-Sunderland midfielder Cattermole has finished his career. He did not leave the club even after relegation to the 3rd division
Xavi: Racism, sexism and other forms of discrimination must be eradicated by stopping games
Javier Mascherano: Messi is the main reason why Barcelona can beat any team
Barcelona is looking for a new coach. Pochettino, Koeman, Xavi are among the candidates (ESPN)
Source https://www.theage.com.au/business/small-business/quest-for-quality-driving-investors-into-technology-says-nitro-boss-20200716-p55ckj.html?ref=rss&utm_medium=rss&utm_source=rss_feed