2. Cheval Cat charged to the line first up over 1000m in a race where the winner clocked sharp time for a maiden. The four-year-old mare should relish the step out to 1200m. The only query is where she gets to from the wide draw, otherwise she looks the winner. 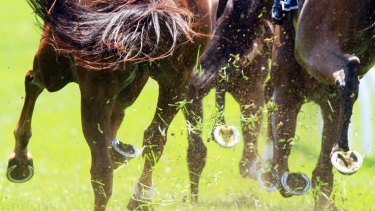 Dangers: 5. Timerox started hard in the market on debut at Armidale after impressing at the trials but nothing went right. He was shuffled back in the run and then couldn’t find clear running. Definitely worth another chance.

How to play it: Cheval Cat WIN and 2,5 QUINELLA Odds & Evens: SPLIT

10. Poita was okay in his first preparation but liked the way he attacked the line first up this time back at Port Macquarie to run third. This isn’t a deep race and the three-year-old gets his chance to go a couple better second up.

Dangers: 4. Inferno Miss is a deserved favourite due to her exposed form but she is becoming costly to punters and does draw a touch awkwardly. So does Poita, mind you, but that’s built into the price.

How to play it: Poita EACH WAY Odds & Evens: EVENS

Plenty of chances in this. The first thing to point out is that there looks to be no shortage of speed and plenty of it has drawn out. 8. Stashes maps to get a very soft run just in behind and she is racing well enough at the moment to cash in on that.

Dangers: 3. Forged In Stone was too bad to be true last start. Has been back to the trials since and matched motors with Epsom placegetter Riodini. 5. Glover and 6. Nicola posted strong wins last start but both led.

How to play it: Stashes WIN Odds & Evens: SPLIT

6. One Pound defied a big late betting drift to win at Dubbo first up. The four-year-old mare is still on the up despite already having 12 starts to her name and looks to get complete control of this race form the front. That makes her the one to beat.

Dangers: 1. Mysticism wasn’t beaten far in the Coonamble Cup which was a blanket finish, and is back to a BM66 here. 8. So Good To Me wasn’t far off One Pound when they last clashed. No knock on 7. Philadora either.

How to play it: One Pound WIN Odds & Evens: SPLIT

9. Lady Riz is flying at the moment. The mare went around at near triple figure odds last start but she flashed home to run third in a deep Class 3. Three starts ago she went straight past 7. Smart Ain’t He to win at Wellington.

Dangers: Smart Ain’t He still warrants respect given he’ll lead these up without too much pressure. If 6. Dirty Digby takes his place in this, he’ll give this a shake too as he is racing as well as ever and a very fit horse.

How to play it: Lady Riz WIN Odds & Evens: ODDS

3. Fritz’s Factor has won four from five over the 1100m trip and was a strong last start winner at Gosford. The mare has obviously returned as well as ever and this is one of the easiest races she has contested in some time. Looks the winner.

Dangers: There wasn’t a lot between 1. Beacon and 2. Molasses at Coonamble a fortnight ago. Beacon draws the better of the two and looks to land in a perfect spot in a race with no shortage of speed.

How to play it: Fritz’s Factor WIN Odds & Evens: ODDS

The form between many of these has been chopping and changing through the country cups circuit so looking at 13. Lancer, offering up a different angle. Did enough first up at the provincials over 1400m and wouldn’t be here if the stable didn’t think he could win.

Dangers: 2. Bajan Gold has been freshened since running over 2000m with gives him the chance to dash over the mile. Maps well. The market will be some guide. 3. Fast Talking gets in-run favours too.

How to play it: Lancer EACH WAY Odds & Evens: SPLIT

is an honest five-year-old that makes his own luck. Didn’t look quite as comfortable in behind horses last start compared to the start prior when he led at Dubbo. Shouldn’t be far away from barrier 2.

Dangers: 2. Joey’s Chance hit the line sweetly behind speedster Emilette first up over 900m. He’s well placed to go one better second up. 14. Vogue Empress for the multiples given her run of recent form.

How to play it: What The Fuss WIN Odds & Evens: SPLIT

Anton Ferdinand on the racist scandal with Terry: I was sent a bullet in the mail. Insults in social networks came every hour
Manchester City have offered 19 million euros including bonuses for 17-year-old Argentine midfielder Sarmiento
Rehagel is a bandit from whom I will not accept an apology. The story of the worst injury in the history of the Bundesliga
Barcelona's presidential election will be held on January 24
Koke: to beat Bayern, you need to play a nearly perfect match. I hope their unbeaten streak ends tomorrow
Loew can return Muller, Boateng and Hummels to the German national team if there are a lot of injuries
Nacho about the Real Madrid game: That's not how titles are won. Working to get better
Source https://www.smh.com.au/sport/racing/race-by-race-preview-and-tips-for-coonabarabran-on-sunday-20201024-p5689e.html?ref=rss&utm_medium=rss&utm_source=rss_feed

Border boom: Services out of airport to increase

Treasurer reveals improvement ahead of Budget