Selections based on a good track.

9. Wild Irish can be a bit hit and miss but she shaped up nicely late behind Cadenabbia at Canterbury last time and a repeat would see her in the finish. Drawn well and if she can take advantage she’s a good chance.

Dangers: 7. Seleque is an improving filly who worked to the line strongly late when placed at Warwick Farm two weeks ago at this trip. From gate one may not get so far back and she’s one of the main hopes. 5. Darling Diamond is coming along well for when she steps out over a bit more ground and you had to like the way she kept hitting the line after sitting wide at Newcastle second-up. One to keep an eye on. 6. Pretty Good was a slight drifter in betting on debut and stuck the task well to run third at Canterbury. The winner has since won again and while drawn wide she’d have some upside. Each-way. 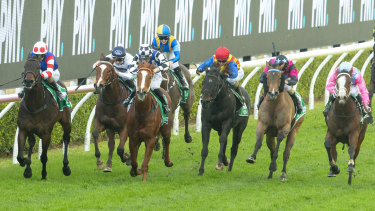 Racing returns to the Kensington track at Randwick with a seven-race card.Credit:Getty

7. Newsreader did more than enough when resuming at Warwick Farm to want to stick with her up in distance. Had a nice run in behind but when she pushed into the clear it took a while for her to balance up again. Better for it and entitled to go close.

Dangers: 1. Private Cheetah was solid in betting on debut and tried to lead all the way only to be grabbed late by Argenteus, who has since won again. Sure to roll forward and could be harder to run down. 8. Easifar has taken a while to get to her first start but she’s trialled well on a number of occasions this year. Sat handy and worse down the leader to win her latest at Rosehill a couple of weeks ago. Keep in mind. 4. Scream And Shout didn’t do a bad job at his only start at Kembla, warming up late into third beaten half a length. Might want a shade further but drawn much more favourably here so has a case.

5. Etheridge is threatening to win a race and comes through a stronger form line than most having run third over this trip at BM78 level after leading, which isn’t her norm. Previous two runs were strong and she’s hard to beat back in grade.

Dangers: 2. Frenzied is worse off at the weights compared to the winner from his last start second at Warwick Farm but it was a top effort after being caught on the hop on the turn. Capable of turning the tables. 4. Prince Of Arragon is 1.5kg better off for beating Frenzied thanks to a claim and it was a dashing ride that saw him score there. Stayer still on the up and has to be one of the major players. 1. Pressure started favourite and led but couldn’t sustain it when fourth in the same race a couple of weeks ago. Has to be a query at 2400m but if she gets a cheap lead could bounce back.

8. Jailbreak overcame a wide gate to lead all the way to a very strong first-up win at Dubbo in open company and has found a winnable race here. Drawn to get a nice run, or lead if required, he’s fitter and should be in the finish.

5. Regal Stage has an imposing first-up record and is trialling up quite nicely as he attempts to make it four from four fresh. Should be right on the speed here and has to be respected. 10. Mission River settled a lot further back than expected at Canterbury last start and did a good job to finish as close as he did in third. If he gets away with them he can race handier and he’d be a big threat. 2. Xanthus hasn’t raced since April when he scored at the Gold Coast. Tapped along into third in a recent trial, has won fresh and finds James McDonald to ride. Watch betting for a pointer.

How to play it: Jailbreak E/W. Odds & Evens: SPLIT.

6. Parry Sound did enough first-up over a mile to suggest he can be competitive out a little bit in distance. Raced consistently through last prep and only beaten 1.5 lengths fresh. Might be one run away but worth a look each-way.

Dangers: 9. Steely has chased home some smart three-year-olds in Mo’unga and Lion’s Roar at his past couple of starts and gets a nice weight drop into this race. Drawn well and wouldn’t surprise to see him measure up. 1. Badoosh rises 6.5kg after his late charging win over this trip at Rosehill but he’s racing in career best form and has the inside alley again. Hard to leave out of the main hopes. 14. American Whiskey made a promising local debut with a closing second at Warwick Farm at 1400m and shapes as though the extra trip will suit. Has to have some improvement so bears close watching.

1. Enchanted Heart made a promising return at Canterbury a few weeks back and with the claim gets into this race quite well. Her best form from last prep is more than good enough to win this, drawn well and would be a surprise if she’s not competitive.

Dangers: 11. Zero To Hundred is an interesting runner. She looked good winning on debut at Warwick Farm back in June then was Listed placed in Brisbane. Hard held at the back in a recent trial and she’s one to keep a close watch on. 14. Alison Of Tuffy has hit the line quite well without threatening at her last couple of starts on good tracks and she’s the type that is capable of sneaking into the placings here. Worth throwing into the mix at odds. 5. Dorothy Of Oz didn’t really fire last time in but her form in her previous prep was promising. Both trials have been behind Chat who won well first-up recently, blinkers go on and she could give a sight.

9. Invinciano showed a lot of purpose in her first-up second behind a smart filly in Joviality at Warwick Farm and she generally improves with racing. Drawn to get a decent run around midfield here, extra 100m is a plus and if she runs up to that fresh effort can feature.

Dangers: 12. Acrophobic did a big job to finish as close as he did first-up at the Farm, charging very late to run into third. Draw a bit sticky for him again here but if they can run on he will be doing that strongly. 3. Royal Marine is on the way up and took control of that same race at Warwick Farm as he held them off to make it three straight. Up 3kg for his trouble but hard to ignore. 1. Gone Bye is a handy middle distance type resuming with a couple of trials under his belt. Has a good record and while he’ll be better for the run if he finds a good rhythm near the speed can give some cheek.

How to play it: Invinciano E/W. Odds & Evens: SPLIT.

Rashford with 4 goals led the race of scorers of the season Champions League
Holand scored the most goals (12) in the first 10 matches in the Champions League
Pirlo about 0:2 with Barca: this match will help Juventus grow
Griezmann did not make any effective actions in 6 matches under Koeman
Ole Gunnar Solskjaer: Leipzig made Manchester United work hard. Rashford had a big impact on the game
Roberto victory over Juventus: the Best response to the unrest in Barcelona - it's a game
Ronald Koeman: Barcelona played their best match of the season against Juventus. We had a lot of chances
Source https://www.smh.com.au/sport/racing/race-by-race-preview-and-tips-for-kensington-on-wednesday-20200929-p560c8.html?ref=rss&utm_medium=rss&utm_source=rss_feed