The Canberra Raiders are knocking on the door of the top eight after claiming a six-point win over the Sydney Roosters at GIO Stadium on Sunday.

The Raiders held off the Roosters’ attempt to stage a second half comeback to close out a 22-16 win on a cold night in the capital.

Canberra fans were just about ready to start planning their September holidays six weeks ago with Canterbury the only thing separating the Raiders from the bottom of the ladder. Now the Raiders’ newfound defensive resolve has renewed hope about their NRL finals ambitions.

Stand-in fullback Joey Manu turned Canberra’s defence inside out to put Sitili Tupouniua over for the Roosters’ first before Xavier Savage gave the Raiders the ascendancy once more. 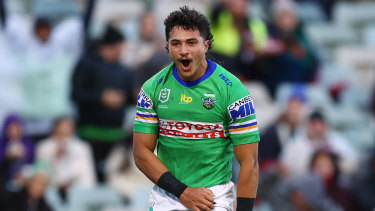 Xavier Savage scored as Canberra snuck away with a win over the Roosters.Credit:Getty Images

The Raiders completed at just 65 per cent throughout the first half but their defence was strong enough to keep their noses in front at the half-time break.

Their lead was extended when Corey Horsburgh scooped up a charge down and found Seb Kris to score, but before long the Roosters staged a second half comeback.

Paul Momirovski came first, then Joseph Suaalii - the teenage sensation who rejoined the Roosters after a stint in NSW camp - rose above Nick Cotric to score off a cross-field kick.