We are seeing, with increasing frequency, books haunted by death-fear, by apocalypse unease. From Jenny Offill’s Weather to Paddy Manning’s Body Count, they line the shelves like patients in a waiting room. The hospital staff (looking quietly harried and put-upon) attend to them with a sense of grim resignation. ‘‘What happened to us?’’ the literature asks. And the doctors, solemnly shaking their heads, reply: ‘‘Couldn’t keep up with reality, I’m afraid ...’’ 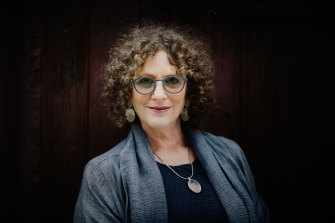 Ramona Koval wisely avoids too much anthropomorphism in A Letter to Layla.Credit:Darren James

Keeping up with reality is Ramona Koval’s modus operandi. Here, the author and broadcaster takes a panoramic view of history, from the palaeolithic period to the near-future. She is motivated by concern for the world her grandchildren (including her titular youngest granddaughter) will inherit: a hellscape of droughts, bushfires, and mass extinction.

The first part of the book is an excursion into deep time, home to all our atavisms and animal ancestors. Koval wisely avoids too much anthropomorphism here (‘‘When I look into their eyes in photographs,’’ she says of apes, ‘‘I want to connect, but [...] I’m not confident I’d understand what makes an ape tick’’: doubtless a healthy scepticism to have).

The essayist Ralph Waldo Emerson once spoke of how anthropocentrism ‘‘transferred nature into the mind, and left matter like an outcast corpse’’; here Koval gives us a vast cornucopia of potential corpses, from the feelings of apes to the nature of homo sapiens’ distant ancestors, noting both the temptations and the dangers of projecting ourselves onto them.

In the book’s second part Koval offers her correspondences from the near-future. Perhaps most successful among these is a chapter on transhumanism. Koval remains sceptical of the attempt to extend life via cryonics, suggesting that it might prove no more than hubristic parochialism, ‘‘an elaborate necropolis’’. Of the language adopted by those inclined to sentimentality about the idea of having their bodies chilled at –196° she remarks: ‘‘[T]hey were not corpses but ‘patients’ or ‘cryonauts’.’’ 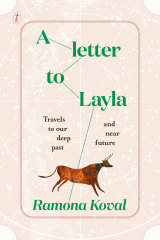 Yet surely this is just a reflection of the contemporary world, a place where illness is a metaphor and reality is endlessly euphemised; where plane passengers are dubbed ‘‘customers’’ (as in, presumably: the plane crashed, killing 200 customers), everything is a service, and we are, always, afraid to look death in the eye.

The lure of condescension often haunts the reportage of such quirky subjects. Koval, however, tends toward diplomacy. She keeps both her own doubts and those of her interlocutors in play, like a battleground of ideas in which the collateral thought remains visible on the ground. Her humanism occasionally limits some of her confrontations with our brave new world (one interviewee criticises her for thinking ‘‘in prosaic terms’’) even as it keeps her wry (marvelling at Sybian’s electronic dildo during an anti-ageing conference: ‘‘I had assumed, perhaps wrongly, that the future would at least be wireless’’). Toward the end of her book she confides: ‘‘My travels back in time and toward the future seemed to have made the idea of always redundant.’’

But if the idea of always is becoming redundant – if always needs to start thinking about seeking new employment – temporary distractions are no better (logging on to YouTube, Koval chooses perhaps the only sensible option now available: videos of Arctic permafrost melting). During our last major apocalypse fear, nuclear annihilation, Hollywood could dispatch all-American caricatures to save the planet. But what kind of nemesis is your own mortality? And what kind of villain is ecological disaster? Too dispersed, too disparate, too all-encompassing. Not just Russia, now, but Bolivia, France, Ecuador, Norway, the Tiwi Islands …

Still, if Koval’s subjects are anything to go by, the lure of escapism remains fairly inescapable. Perhaps this is one aspect of our anxieties, as manifested in everything from climate change denial to our fear of death, that can’t be – shouldn’t be – denied. Scientists warn of the health risks yielded by catastrophes such as planetary warming. Yet talking about the problem itself is so fraught, so invariably perilous, that it constitutes a health risk in its own right.

Such are the animating forces behind Koval’s book: the sense that our world is inescapably reverse-telescoped; and that all signs of purchase on the present are receding daily. With A Letter to Layla, Koval tries swinging the telescope back around.

Ferrara on Maradona: Diego was an anti-hero. He paid for his mistakes
Mikel Arteta: Arsenal have problems with goals. This is the difference between winning and losing
Alexey Miranchuk will pass a second test for coronavirus in 6 days. He will not play in the Champions League with Midtjylland
The cutest video of the weekend-Antoine Griezmann's daughter celebrates a goal with her dad 😻
Deeney on Cavani: he didn't mean to offend, but a three-match suspension and training will be enough
Raul Jimenez suffered a fractured skull. Wolverhampton forward operated
Yuri Rozanov became a commentator, bypassing the age limit. Before that, he won the channel One competition, but instead of going to Euro 1996, he got a TV
Source https://www.smh.com.au/culture/books/ramona-koval-s-lessons-from-the-past-and-the-future-for-the-present-20201016-p565sy.html?ref=rss&utm_medium=rss&utm_source=rss_culture

Fracas puts the focus on how dependent we are

When it comes to climate action, the states are showing up Morrison

After 250 days, Queensland's border wall is coming down

Qld Education Minister says 90 per cent of schools are airconditioned

When Smith said he'd found his hands, it was a masterful understatement

The lie from which the Gobbo scandal grew

No state met the deadline for an international students quarantine plan

Doomscrolling, cottagecore and more: Macquarie's words of the year revealed

Queensland duo released on bail after girl, 3, died in hot car in Townsville

How did Grosjean walk away from horror crash, and what is a halo?

'Too little, too late': Government accepts all recommendations from aged care COVID-19 report

'Disgraceful' Gobbo condemned but may be out of reach of justice

China's Twitter attack on Australia is another attempt to provoke

A 'zero waste' life starts with your groceries

Race-by-race tips and preview for Armidale on Tuesday

Policeman dies in suicide at NSW Police headquarters in Sydney

'I wish I hadn't gone' to meeting with Woodman, Labor MP tells IBAC

'Could be the making of him': Pucovski backed to replace hurt Warner

The shows go on - and now more people can see them

For years, Kate was told her daughter's reading was 'fine', but it wasn't

Victoria to cash in on HomeBuilder extension

Economic focus on 'cheap energy' pays off for climate policy

Australians put their money in the bank, but yet to spend it

Benbrika in touch with IS fighters and jailed terrorists, court told

Kickboxer who brawled at courthouse seeks payout from police

Plane shot down amid fighting, despite PM's assertions: Tigray chief

Lawyer X: Purana's legacy is the loss of trust in the justice system

'Bruv, are you taking steroids?': Hunt's explosive text to Gallen