The Australian Securities and Investments Commission (ASIC) is preparing for potential waves of small business insolvencies in 2021 and beyond, as regulators also consider moves to manage the large numbers of borrowers falling into financial strife.

With $274 billion in mortgages and small business loans deferred as an emergency response to the pandemic, ASIC commissioner Sean Hughes told a parliamentary hearing on Wednesday that the regulator was in daily contact with banks and other lenders to understand how many borrowers could be in hardship. 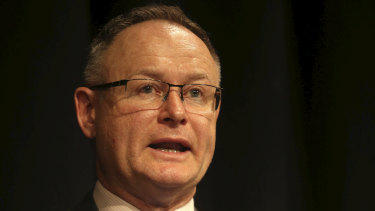 ASIC commissioner Sean Hughes said the watchdog was thinking about where waves of small business insolvency may occur.Credit:James Alcock

A critical question for the financial system is what proportion of the deferred loans will end up in distress in 2021, when deferral periods end and the government is scheduled to withdraw support for stricken firms.

"We are certainly looking out beyond the pandemic, and in particular to where the waves of potential insolvencies in small business sectors may emerge into 2021 and 2022," Mr Hughes said in a response to Labor MP Anne Aly.

"We’e very mindful of the impact not only families and small business, but also the impact on the insolvency profession and the volume of work that is going to be flowing in that direction. But it’s certainly something we will be keeping a very close eye on over the coming months and it’s fair to say years."

Other financial experts have predicted the extent of banks' bad loans will not become apparent until next year.

Mr Lonsdale said APRA had given banks temporary capital concessions for deferred loans until March next year, which would give banks time to work with customers and determine who could resume repayments.

In response to a question on how APRA could protect borrowers when insolvencies occurred, Mr Lonsdale said regulators had a role in "easing the transition" for loans that could not be repaid, given the number of financially stressed borrowers.

“When you look at impairments, there is a role for us, and we are doing that with other regulators, to think what other collective action can we take to ease the transition for loans that cannot be repaid?” Mr Lonsdale said.

“I should say this is something that banks do in the ordinary course, what’s unusual about this though, is the volumes that we are talking about and that will need to be monitored and carefully handled.”

Mr Lonsdale said the issue was being discussed with banks and the Council of Financial Regulators — a body that also includes ASIC, the Reserve Bank and the federal Treasury.

APRA figures this week showed the stock of deferred loans was still rising in June, despite some people resuming repayments, and Jefferies analyst Brian Johnson said it was likely Victoria's latest lockdown had caused more people to pause repayments.

APRA chairman Wayne Byres also defended the regulator's move to soften its guidance for bank dividends last week, saying a setback to the economy from Victoria's latest lockdown would not change its view on banks making the payouts.

"We feel we’ve allowed for a significant deterioration in activity in thinking about the right policy setting for dividends and capital management," Mr Byres said.

Sadio mane: we are lucky to have Tiago in Liverpool
In a non-League match in England, an Alpaca ran onto the field and scared the player
1,000 people will be allowed to attend Milan's first game of the season. The club invited doctors to the match
Barcelona will pay 18 million euros to city for their pupil Eric Garcia
Sutton on Chelsea's worst transfer: there are examples of Torres and Shevchenko, but Kepa is ahead of everyone
Acts Kolisevski: I'm lucky that Ronaldo is now my partner. He is great
Manchester United have no plans to buy a Central defender in this transfer window
Source https://www.theage.com.au/business/banking-and-finance/regulator-braces-for-waves-of-covid-19-insolvencies-20200805-p55iui.html?ref=rss&utm_medium=rss&utm_source=rss_feed