Dave Rennie wants to bring in Petrus du Plessis from Glasgow to be Australia’s scrum coach but Rugby Australia’s precarious financial situation and COVID-19 restrictions might mean the incoming Wallabies boss doesn’t get his way with head office.

While there is no certainty over what the international Test calendar looks like this year because of the pandemic, the Wallabies are pencilled in to play their first matches of the year, both against New Zealand, on October 10 and 17 in Australia. 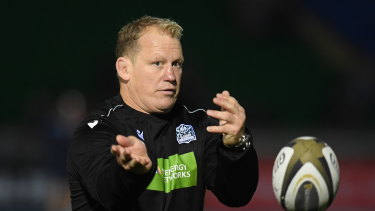 Glasgow Warriors assistant coach Petrus du Plessis has been linked to a role with the Wallabies. Credit:Ross Parker

Rennie, who landed in Australia last month and was released from hotel isolation on Tuesday, has almost all the pieces of his coaching jigsaw puzzle sorted for when the Wallabies do take the field.

Australians Scott Wisemantel and Matt Taylor have already been lined up as Rennie's assistants and were hard at work already during lockdown before the head coach officially began his 3½-year contract at the beginning of last month.

While Brumbies coach Dan McKellar has been touted as a likely forwards coach, Rennie is also super keen to employ a specialist scrum analyst and has a man he knows very well in mind.

Du Plessis, the former Saracens and London Irish prop, played under Rennie at Glasgow before signing in June last year to be the side’s scrum coach. 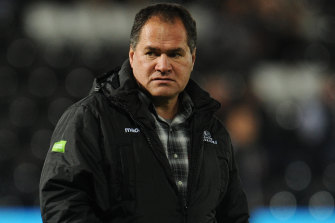 It was announced recently that Du Plessis would depart Glasgow and sources say Rennie is very keen to get him to Australia given their excellent working relationship.

Formal discussions have begun, however it is not as simple as signing the dotted line.

No deal has been done and RA hasn't given the green light for the 39-year-old to come on board. RA will want to keep Rennie onside as much as possible, however financial realities have to be taken into consideration. The governing body's high-performance budget is likely to be significantly reduced, with chairman Hamish McLennan flagging cuts of up to $15 million.

Many in the game believe too much money has already been poured into the high-performance arm.

According to RA’s financials, $9.7m was spent last year on the Wallabies team, as well as millions more in other high-performance departments.

RA is also weighing up the value of bringing in a specialist scrum coach given the current climate when players and staff have already accepted major pay cuts.

At the moment, Du Plessis is unable to travel to Australia and could only do so with a visa exemption.

There is also the issue that Australia will play fewer Tests in 2020. Rugby officials are hopeful the Wallabies can play four or more Tests against New Zealand through the year but there are doubts over whether the Rugby Championship will proceed in a hub across the ditch due to alarming COVID-19 rates in South Africa and Argentina.

Du Plessis, however, wouldn’t be coming on board for a one-year deal. Given McKellar is still with the Brumbies until the end of next season, Du Plessis could take care of analysis during the earlier parts of next year with fellow Wallabies assistants before both link up later on when the international schedule kicks off.

Last year, the Wallabies had Simon Raiwalui as their forwards coach but didn’t have a scrum specialist in the ranks.

Skills coach Mick Byrne is no longer employed by RA, so that money could theoretically be spent on Du Plessis.

Rennie will live in Queensland, becoming the second Wallabies coach in four decades to do so. His assistants, as well as director of rugby Scott Johnson, are all based in southeast Queensland and northern NSW.

McKellar, however, is expected to remain in Canberra.

Rennie will face the cameras for the first time on Friday on the Gold Coast since touching down in Australia as Wallabies coach.

Leeds United have offered Bayern 20 million euros for Nuisance. Clubs in final stages of negotiations
Pep has already spent under 480 million on city's defence, and this week broke the club record for spending on a defender
The APL referees will be asked to soften the hand play. But the League cannot deviate from the rules
Lyon values Aouar over 40 million euros. Arsenal offered 35
Tottenham are not selling Mourinho's merch - because Chelsea still own the trademark rights. But it didn't stop Manchester United
Shomurodov is close to moving from Rostov to Genoa for 8 million euros (Sport Italia)
Pobegalov about 12 cases of covid in Shinnik: I hope we can start training by October 4
Source https://www.theage.com.au/sport/rugby-union/rennie-has-his-eyes-on-a-wallabies-scrum-coach-but-may-not-get-his-man-20200806-p55jaa.html?ref=rss&utm_medium=rss&utm_source=rss_feed