The coronavirus recession will be so devastating for so many that it seems unfair to single out any age group for the burden it will carry long after the pandemic.

Yet the hazards for younger Australians are starting to mount as the recession takes hold and the Morrison government embarks on painful university changes that offer no greater investment in the next generation.

The sight of university students queuing to get into a pub, as they did outside Sydney’s Golden Sheaf on Wednesday night, is a reminder that the young can feel invincible whatever the risks to their health. The risks to their wallets are another matter.

The government is about to upend the old way of paying for higher education – a system that is fundamental to giving school leavers the best shot at valuable jobs and promising careers.

The stale debate about helping “elite” students belongs to a bygone age. About 40 per cent of Year 12 students now go to university, compared to 15 per cent in the 1970s. The recession is likely to increase that ratio as young Australians choose education over unemployment – a trend that serves the national as well as private interest.

The education package, announced by Education Minister Dan Tehan three weeks ago, shows how powerful this trend could be – and how little the government is willing to spend to support it. 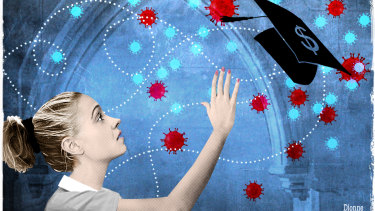 The policy assumes that every percentage increase in youth unemployment leads to an equivalent jump in university applications. With a scenario of 30 per cent youth unemployment – dire but not outlandish – the country might need 20,000 more places for aspiring students.

There will be no stimulus to help this happen. While the government spends $260 billion on its other pandemic measures, it has designed a “budget neutral” education plan that tries to teach more students without a big investment.

In fact, the government subsidy on average per student will fall from $11,953 to $10,070 over time. Andrew Norton, of the Australian National University, one of the best analysts of higher education policy, says the funding model is a key challenge with the plan.

This will end a long trend in support. Norton calculates that the commonwealth subsidy per student has grown from $6805 to $11,222 over the past two decades. (Those figures are not adjusted for inflation, but they indicate growth in real terms: the $6805 outlay in 2001 would be equivalent to about $10,500 in 2019.)

Total federal spending on universities remains significant – about $18 billion this year, heading towards $20 billion in 2024 when all outlays and the higher student numbers are included. Even so, the government is forcing students to pay more of their own way.

This overall trend is more important than the “culture war” between science and the humanities. It is logical for the government to offer incentives for science, technology, engineering and maths, given the demand for these skills. The flaw is in asking humanities students to foot so much of the bill.

And the culture war is more complicated than it looks because the commonwealth contributions are set by course, not degree. While English is heavily subsidised, history is not. A student who signs up for a Bachelor of Arts in English and foreign languages could pay far less than one doing anthropology and political science.

The students who could pay most for this “reform” are those starting law, economics, management and commerce next year. The fees for creative arts could soar. Tehan’s own estimate is that the student contribution in the humanities will rise 113 per cent from next year.

This means the student debts could be crippling for some graduates on average incomes. Norton estimates an engineering graduate could pay off the student loans within five or six years but a humanities graduate could take most of his or her career.

“Do we really want fairly typical graduates to have repayments coming out of their incomes for decades?” he asks. “I would say not.”

The idea that employers do not want humanities graduates is, of course, a myth. Mitchell Institute policy fellow Peter Hurley estimates the median income for a humanities graduate is $70,300 three years after finishing the course, higher than the $68,900 for those with science and maths.

The government argues that its plan puts an emphasis on the STEM skills the economy needs – and that this “job ready” approach will increase student places, lift productivity, boost national income, help the regions and build stronger links with industry.

All of this may be true, but students are paying for the gains at the very time the recession hits. The government model suggests 60 per cent will pay the same or less for their courses, while 40 per cent pay more.

The numbers in the government’s own policy paper tell this story. Under the current model, the commonwealth contributes $11,953 and students contribute $8644 to courses on average. Under the new approach, this changes to $10,070 and $9319.

In other words, the student contribution jumps on average from 42 to 48 per cent of the total, with a sudden price hike that might alarm the competition watchdog in any other market.

The fate of this package now depends on the Senate, which vetoed the Coalition’s changes in 2014 and again a few years later. Tehan has a friendlier Senate than his predecessors and a good chance of prevailing over the objections of Labor and the Greens.

The changes could pass with support from Pauline Hanson’s One Nation and Tasmanian independent Jacqui Lambie. While Hanson seems unlikely to care about fee increases for arts graduates, Lambie has been influenced in the past by whether any changes benefit the University of Tasmania.

Tehan, who comes from regional Victoria, has made sure the package offers $400 million for regional universities (and the University of Tasmania is included in this category). This will help when the Senate negotiations begin.

The next step in the government’s plan for education will be vocational education and training, a sector which has suffered damaging cuts to funding compared with the revenue boom that overseas students gave the universities before the pandemic.

All the signs are that Scott Morrison is more interested in a funding boost for technical colleges rather than universities. The Prime Minister has already offered more money for vocational training if states will sign up to a new deal.

Arguments about higher education have been shaped for years by the proposition that students must pay for their private gains – that is, the higher incomes they accrue over their careers because they have their degrees.

The government’s new plan takes this to breaking point. For some subjects, like law and history and commerce, there will be only the smallest commonwealth contribution – as if there is no national benefit at all from these graduates.

Tehan has overseen a package that will fund about 16,000 or 18,000 student places next year, while keeping total spending on course for $20 billion by 2024. Yet the overall package is hardly generous in a recession.

This is a tough plan for the taxpayers of tomorrow -- those young Australians who will have to pay more for their degrees than previous generations while carrying the long-term cost of the pandemic stimulus.

In Romania, a special champion: everything was decided in the match, the format of which was chosen 3 hours before the whistle
Danny rose: I was stopped by the police last week: is This a stolen car? Where did you get it?. And this happens regularly
Barcelona refused to sell for 60 million euros Trinca u, bought from Braga for 31 million. The club count on him
Chelsea will compete with Everton for Regilon. Real Madrid is ready to sell him
Espanyol asked La Liga to cancel the flight. The Catalans have been in the relegation zone since the fifth round
Inter have not yet decided on Conte's future. Everything will be decided after the Europa League
Haji resigned as Viitorul's coach
Source https://www.smh.com.au/national/repaying-uni-fees-for-decades-the-burden-on-generation-covid-20200709-p55anl.html?ref=rss&utm_medium=rss&utm_source=rss_national