Review: Wander a magical path at the Lorne Sculpture Biennale

I'm wary about the concept of sculpture by the sea, associating it with watered-down ideas and insipid art. The 6th Lorne Sculpture Biennale, which opened last weekend, refutes my prejudices in so many ways. 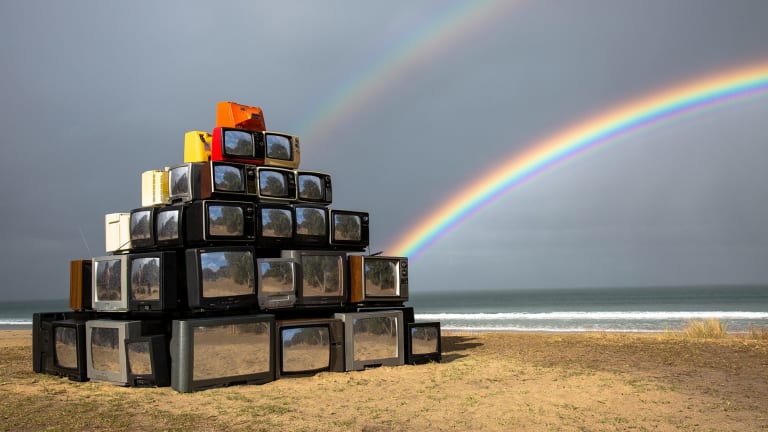 Curator Lara Nicholls (who grew up in Lorne and is also the National Gallery of Australia's curator of 19th century Australian art) has created an exhibition that balances artistic integrity with a lightness of spirit; that asks serious questions about humanity's exploitation and destruction of the environment, but never allows thematic considerations to overwhelm the art.

Not every piece in the biennale satisfies, but overall, Nicholls' thoughtful selection and location of works re-envisages the possibilities of public outdoor sculpture. She has organically positioned the work of 41 artists from across the globe; sea, sand, wind and sky act upon the art. 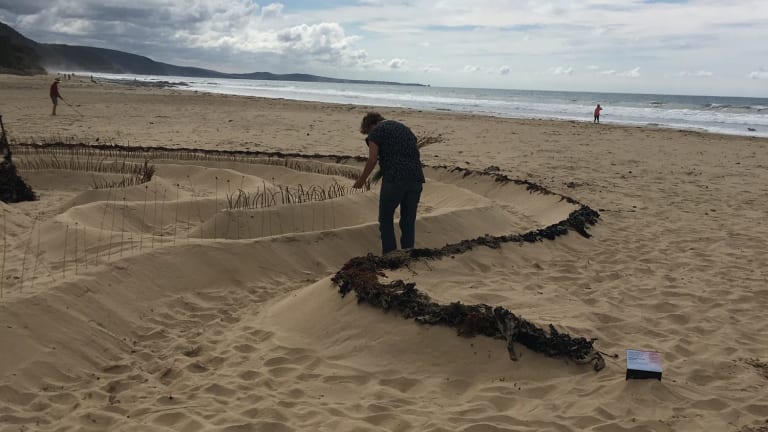 Kerstin Cuming's Meeting Self - working with what is.

The biennale meanders along the foreshore for some four kilometres, from the mouth of the Erskine River with its enchanting swing bridge, through shady canopies of cypress trees, on to the sharp light of sandy beaches and crashing surf, across rocky shelves, rising through dappled walking tracks all the way to the Lorne pier and Point Grey.

Wandering along this magical, mutable path, with its shifting light and landscape, one encounters sculptures in random fashion, discovering them hidden in the coastal scrub, dangling from tree limbs, loitering in camp sites.

Ephemeral works are among the most inspiring, such as Kerstin Cuming's Meeting self – working with what is , constructed entirely from materials collected from the bush and beach.

Cuming has carved grooves and ridges into the sand to form a large, spiralling labyrinth, delicately decorating it with kelp, grasses and foliage, placing a tall, spindly tree-form at its centre. One walks to the heart of the labyrinth and back – barefoot is best – contemplating the transience of human endeavour and the fragility of the natural world. 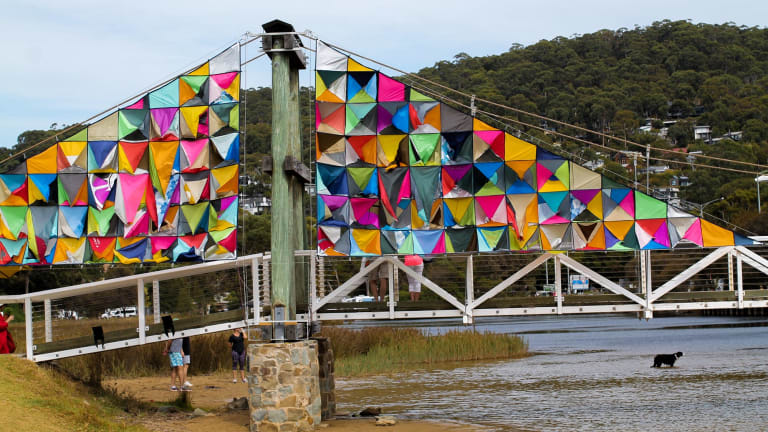 Over the fortnight, Cuming's work will dissipate and dissolve, returning to nature. As an expression of the exhibition's themes, it is wonderfully poetic. Nicholls has titled this biennale Landfall , a word that signifies the arrival or sighting of land from the sea, but that also contains more than a hint of doom, suggestive of environmental collapse.

At the mouth of the Erskine River, Shirin Abedinirad's Revision is a beacon to our throw-away culture. Unwanted old televisions are stacked into a pyramid-like shape. With their curved screens covered in reflective film, the televisions mirror the reality around them, inviting a pause from the distorted views that often project into our screen-obsessed lives. 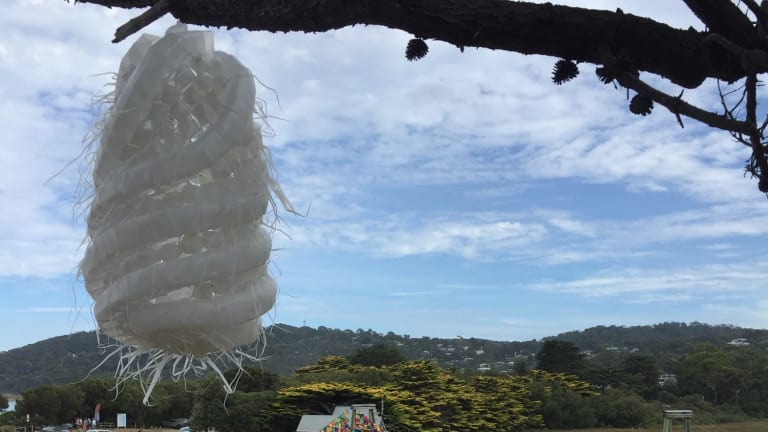 The nearby swing bridge is ablaze with Georgina Humphries' exuberantly coloured Tents.to.sea , a billowing patchwork of spiky sails, stitched together from tents discarded after music festivals and concerts. (Humphries won the emerging artist award).

On the opposite bank of the river, Ritchie Ares Doña has also transformed waste into art; High density polyethylene cocoon is a series of rivetingly beautiful cocoon-shapes suspended, lantern-like, from a conifer. The cocoons are made from strips of plastic milk cartons, woven into form using a traditional Filipino technique called Puso. 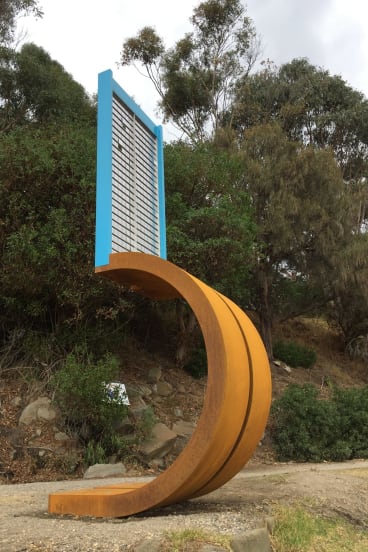 Sea, sand, wind and sky act upon the art

Swinging in far more unsettling fashion is Stephanie Karavasilis' sinisterly alluring Vestiges – a forest of dried kelp ribbons hanging from trees, lettered with fragments of historical texts about early European contact with the local Indigenous communities, testament to a threatened culture and people.

Some of the sculptures seemed tangential to the theme, such as Flaccid civic monument (after Claes) – a sight-gag involving a drooping obelisk, by MONUMENTAL (Michael Needham and Jason Waterhouse).

The optical play of Marcus Tatton's The Equation is ultimately more provocative – the charming silhouette of a house and tree built out of stacked firewood, complete with campfire, alludes to the plundering of limited resources for our creature comforts.

The winner of the biennale's non-acquisitive $20,000 prize, Margaret Worth's four-metre high Vajrasana meditation , takes its shape and name from a yoga kneeling pose. It faces the sea with its deeply curved corten base (representative of the knees) and is topped by a grid of shimmering squares that flicker in the wind, giving form to air.

On a nearby stretch of sand, Matthew Harding's beguiling Landbridge curls like a lemon peel, an inherently unstable twist of bridge made from reclaimed pier posts. It represents the landmass that once connected what we now call Victoria and Tasmania.

The work marks Harding's fourth inclusion in the Lorne Sculpture Biennale, and sadly his last. The Trentham artist ended his life on February 22. His studio assistants put the finishing touches to Landbridge . It now stands as a poignant reminder of a gifted sculptor who gave all for his art .

Gasperini about Ilicic: He wants to find a team where he will achieve something more significant
Mbappe will not play in the match for the French Super Cup. The game will be held in Israel
Benfica introduced Yaremchuk. The forward of the national team of Ukraine moved from Gent
17-year-old Gurna-Duat can move to Atalanta from Saint-Etienne for 10 million euros
Bayern did not win a single friendly match under Nagelsmann - 3 defeats and a draw
Goalkeeper Hradecki was appointed captain of Bayer
Hypercube has already reformatted several leagues. How did this affect the UEFA ranking and attendance?

Who do the Boomers play next?

When women should pay for a first date

Simone Biles shows the quiet dignity of refusing to participate

Children must be in school as quickly as is safe

When burnout becomes a disease of civilisation across the globe

‘Is that her?’: Elaine Johnson’s family hopes photo may bring closure after 40 years

‘I knew something wasn’t right’: How educating couples about stillbirth could save lives

‘COVID sucks’: Locked down children need routine, and your time

Brummer found peace in anonymity, but his death reveals he is far from forgotten

Your Weekly Horoscope for August 1-8

What the religion question in the census really measures

Cashless, cashierless, and creepy: a visit to the future of grocery shopping

15,000 rich foreigners given visas to Australia during the pandemic

Labor MPs call for a royal commission into coronavirus response

Capturing unexpected moments has two Herald photographers up for awards

‘Less than a beer can’: Denny’s personal best discus throw agonisingly short of a medal

Should you borrow money to invest in shares?

Don’t let FOMO rush you into the property market

Running to raise money for a good cause

‘WE HAVE A SPRINTER’: Browning breaks Aussie record in scorching start

Barty and Peers bag bronze thanks to Djokovic forfeit

Boy under 10 among latest Covid-19 cases

Not Buckley’s hope: the road ahead for Sam Mitchell after Clarkson

‘Lap of the Map’: Meet the families beating border restrictions to explore Australia

‘Lap of the Map’ families

The Aussie cake worth driving hours for

More than 250 PINs, eight arrests as police lock Sydney residents out of CBD amid protest fears

‘It’s been an honour’: How Ledecky, Titmus beguiled the world in Tokyo

Anti-lockdown protest never arrived, but the movement is just getting started

With Osaka out, Matsuyama has become the Japanese story of the Games

Racing on its own with no NRL, AFL in Covid state

Race-by-race preview and tips for Forbes on Sunday

Owner rolls the dice one last time with Lockdown Gamble

Peaty’s sizzling split and a US blunder: How Australia won bronze in mixed medley relay

Waller and McDonald put exclamation mark on another top season

It’s not his fault, but Cooper would be a liability for the Wallabies