The mayor of an outback Queensland town recently found a Brisbane tourist crying in a caravan park.

Like many other cashed-up city-dwellers, the man was used to spending Australia's winter months in Tuscany and skiing at Whistler to escape summer's heat. 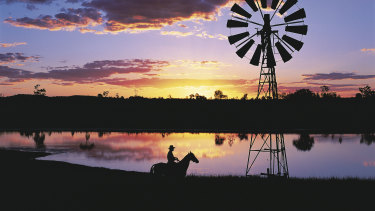 Queensland's Longreach, where occupancy has been at 97 per cent this year.Credit:Tourism & Events Queensland

He was ashamed he had not spent more time in his own backyard, Blackall mayor Andrew Martin said.

Cr Martin, who also chairs the Outback Queensland Tourism Association, says country Queensland has been filled with similar visitors during the pandemic.

"We have been extremely fortunate all year – occupancy in Longreach has been at 97 per cent," he said.

"We are seeing a lot of new visitors who would normally be in Bali or Europe and want somewhere to spend their money."

Cr Martin is bracing for "mayhem" when Queensland's border to Greater Sydney and Victoria opens on Tuesday.

"The minute the gun goes off for NSW and Victoria, Jesus Christ, you'll have a lot of people flying into Brisbane and Cairns.

"But we also need more flights out here [to western Queensland], and competitive pricing."

The colourful mayor said he didn't want to compete with other tourism centres and hoped the southern visitors – and their money – could be shared around.

"If people go up the coast to Cairns, hopefully they come back down through the outback."

Many outback towns around the country have been on their knees for decades, dealing with population decline, the end of the mining boom, and crippling drought. But the unexpected tourism bump has breathed new life into remote parts of the state.

Cr Martin said Queenslanders who lost their jobs during the pandemic could "easily" find work out west.

"It is the complete antithesis of what is happening on the coast. We have enormous skills shortages, and we can't hire everything from plumbers to wait-staff to chefs, drivers, cleaners, bar staff – you name it. 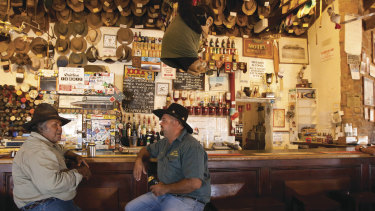 "If you want a job, just come out here, we'll find you a job and somewhere to live."

Winton, a tiny fossil town in central-west Queensland that's about a 15-hour drive from Brisbane, has broken visitor records in 2020, despite being closed or having limited capacity for most of the year.

Trish Sloan, collections manager at the Australian Age of Dinosaurs, said more than double 2019's entire number of visitors flocked to the museum in September alone.

In 2019, the home of the largest collection of Australian dinosaur fossils welcomed 5106 people, compared with a whopping 10,183 in September this year.

Ms Sloan said the town had braced for a disastrous year as most visitors arrive in Winton during autumn and the cooler winter months, which was when COVID-19 restrictions were at their peak.

"We ended up having to hire more staff – it was really overwhelming and humbling," she said.

"COVID is horrible, but in regards to tourism, we have reaped the rewards."

Tourists usually abandon western Queensland for the coast during summer, when temperatures soar above 40 degrees, but not this year.

Cr Martin said towns such as Bedourie and Boulia – where it gets so hot, bitumen on the roads begins to melt – have bookings right through Christmas as well.

"I am 66 years old and this is the first time in my lifetime that the outback will see tourists in the summer."

Van de Beek has no intention of leaving Manchester United. Solskjaer believes in the midfielder and will give him a chance
Lampard couldn't say goodbye to the Chelsea players. The Czech briefly informed them of his resignation before training
Every time Messi doesn't play, Barcelona wins. Ex-Argentina goalkeeper Gatti about Leo
Barca's debt is 1.2 billion euros. The club wants to postpone loan repayments
Jordi Alba: I understand why people might hate me. I really play hard
Real Madrid will be able to pay Mbappe about 21 million euros a year. PSG will offer the Frenchman a salary of 36 million euros-like Neymar
Udinese sign Fernando Llorente, Cutrone and sell Lasagna to Verona for 10 million euros
Source https://www.theage.com.au/politics/queensland/riding-high-from-tourism-influx-the-outback-s-poised-for-a-bumper-summer-20201127-p56iid.html?ref=rss&utm_medium=rss&utm_source=rss_feed