Several roads in northern Sydney are closed on Monday morning due to ongoing rain, which has seen more than 100 millimetres fall in some suburbs over the weekend.

At 6.30am, the Wakehurst Parkway was closed in both directions from Oxford Falls to North Narrabeen, due to flooding, with motorists advised to instead use Pittwater Road and Warringah Road. 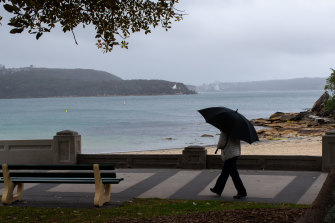 The wet weather at Balmoral Beach on Sunday.Credit:Edwina Pickles

Also on the northern beaches, Oxford Falls Road was closed in both directions between the Wakehurst Parkway and Aroona Road due to flooding.

In the north-west, Galston Road was closed in both directions due to a rockfall west of the bridge. Motorists were advised to travel on Old Northern Road, New Line Road and Pennant Hills Road instead.

The disruption comes as some areas of the city's upper north shore and northern beaches recorded more than 100 millimetres in rain over the past three days, as a low pressure system brought a wet end to a previously dry October.

Nearby in Hornsby there were similar totals: the suburb saw 75 millimetres since 9am Sunday for a total of 112 millimetres over the course of the downpour.

On the northern beaches, there was 73 millimetres of rain at Terrey Hills since 9am Sunday and 112 millimetres recorded across the weekend.

Consistent rain also fell in the city and eastern suburbs. At Little Bay there was 40 millimetres recorded on Sunday, bringing the total to 96 millimetres as of 6.30am.

Light rain is forecast for Sydney until Friday, although conditions are expected to ease significantly on Monday evening and little rain forecast on Tuesday.

"The falls will continue with windy and wet conditions, and by this afternoon and evening, as the system moves to the east, the rainfall will be easing," said Bureau of Meteorologist forecaster Shuang Wang. 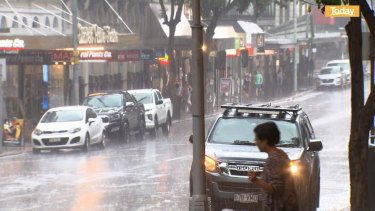 Soboslai could move to Leipzig in the winter if Salzburg fail to qualify for the Champions League play-offs. The midfielder is also of Interest to Bayern
Bale has 200 career goals. He hasn't scored in European competition for 2 years
Fati became socio of Barca, but will not be able to vote in the next election
Jose Mourinho: some Tottenham players coming to visit LASK, Ludogorets, think they don't belong there
Pioli on 4:2 with Celtic: Milan did not lose their head at 0:2 and continued to play as a team
Messi will be at PSG next year. RMC Sport journalist on Barca forward
Suarez passed a negative test for coronavirus and will return to the General group of Atletico tomorrow
Source https://www.theage.com.au/environment/weather/roads-closed-power-out-as-parts-of-sydney-see-100mm-rainfall-20201026-p568i0.html?ref=rss&utm_medium=rss&utm_source=rss_feed

Mum 'in a rage', son says, but unaware of sleeping family when she allegedly lit fatal fire

'I am innocent': First arrest under new law to curb interfaith marriage

Off and racing to a carefree retirement

South Koreans in a pickle over China claim to kimchi

Cully's card: How does Australian rugby rate at the end of 2020?

'We have the gold standard': US and UK argue over vaccine nationalism

Don't pop the champagne just yet on Australia's economic recovery

Elliot Page coming out as trans isn't just about identity, it's about visibility

Starc back as record nears

'Last night was not OK': How a dancefloor decision landed an NRL star on trial for rape

What makes the perfect Twenty20 cricketer?

Speed freak Latham ready to turn it up to Eleven

NRL's hands are tied on de Belin, and so they should be

Beatlemania, a love language that stands the test of time

You only need two ingredients for cheating to occur, says Titus O'Reily

'Our main focus is on the Ashes': Root aiming for revenge in Australia

Trump throws one final curveball in his Beijing battle

People lining up for $80k-a-week rental

'This is not a hoax': Fauci pleads as Biden calls for 100 days in masks

Whatever Labor can do, the Liberals say they'll do cheaper

Mosques across France raided in fight against Islamic 'separatism'

The best, the worst and the thoroughly average Christmas albums of 2020

'This is not fake': Fauci pleads with Americans, says US faces 'crisis situation'

Danger lurks as Wall Street records barely cause a ripple

Ex-Aussie bowler gets another shot with Sixers

US, UK military teams to participate in Call of Duty tournament

Overwhelmed by choice? Let our critics be your guide this summer

US imposes visa curbs on members of Chinese Communist Party

Footage Shows the Moment of Receiver Collapse at Arecibo Observatory

I tried an at-home method of stretching my jeans. Here's how it went