Former Brazil striker Ronaldinho Gaucho said he has tested positive for COVID-19 and is self-isolating.

The ex-Barcelona and Paris Saint-Germain player was in Belo Horizonte, where he played for local side Atletico Mineiro, when he got his diagnosis. 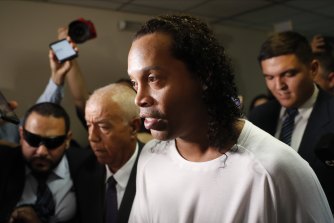 "I arrived in BH (Belo Horizonte) yesterday, I took the COVID test, I tested positive, I am good, asymptomatic so far," the two-time FIFA World Player of the year said on Instagram on Sunday.

The former AC Milan, Flamengo and Gremio player said he would remain in a hotel until his condition improved.

The charismatic forward spent a month in a Paraguayan jail with his brother and business manager earlier this year, accused of entering country with a fake passport.

Queiroz dismissed as coach of the national team of Colombia
Klopp on goalkeeper Kelleher's game with Ajax: Top, top, top, top
Manchester United, Tottenham and Chelsea are Interested in Brighton defender white
Red bull tore up Lokomotiv with a perfect variety of attacks. The stricken Loco didn't know what to do
The Spanish super Cup may not take place in Saudi Arabia, but in Spain
Goals by Zobnin, Kuzyaev and Skopintsev claim the title of best in November
Romelu Lukaku: one and a Half years at Inter are the best in my career
Source https://www.smh.com.au/sport/soccer/ronaldinho-tests-positive-for-covid-19-20201026-p568kn.html?ref=rss&utm_medium=rss&utm_source=rss_feed

Massive search for man washed off rocks at Esperance beach

Mick Schumacher, son of Michael, to race for Haas F1 in 2021

A year in sport we'll never forget, even if it was all a blur

NRL, cricket on collision course over use of SCG

“Absolute game-changer”: What NSW is allowed to do when restrictions ease on Monday

'Absolute game-changer': What's allowed in NSW when restrictions are eased on Monday

Optimism on Chinese student numbers as tweet row rages on

Writer of Bryant film: 'Evil repeats itself if we don’t shine a light on it'

It's just not cricket: CA calls for calm as relations with Seven deteriorate

UK to get COVID vaccine next week

OUR HUGE WEAKNESS: How much of Australia does China really own?

‘I never agreed to a back channel’

Consumer spending spree gets economy on track to recover from recession

'In self-defence, I think I killed her': Court hears Jessica Camilleri's Triple 0 call

After a sell-out run in London, Mary Quant is coming to town

'Join the race': Australia faces push for net-zero ahead of UN climate talks

Ugle-Hagan wants to be the next Buddy Franklin

Despite rising standard on the field, NRLW likely to remain four-club competition in 2021

A $200b question: Will we save or splurge on poached eggs?

Australian Open to begin on February 8

Bryan Cranston is a judge who's breaking bad in Your Honor

Once thought extinct in NSW for a century, the diminutive numbat returns to the wild

Please Explain podcast: What will the government prioritise in the last week of parliament?

'No basis in fact': Andrews hits back at Ombudsman's muzzling claim

'We tried everything': Two dead in suspicious Point Cook fire

'We tried everything': Infant among three dead in suspicious Point Cook fire

‘It has to stop’: Georgia election official vents anger at Trump