Ronaldo finally off the mark, Costa dismissed for spitting

Cristiano Ronaldo broke his Juventus duck in his fourth game when his second-half brace gave his new outfit a 2-1 win over Sassuolo, although the Turin side's day was marred by a red card for Douglas Costa for spitting at an opponent.

The five-time World Player of the Year opened his account in the easiest possible fashion by tapping into an empty net from less than two metres in the 50th minute, then finished off a counter-attack 15 minutes later. 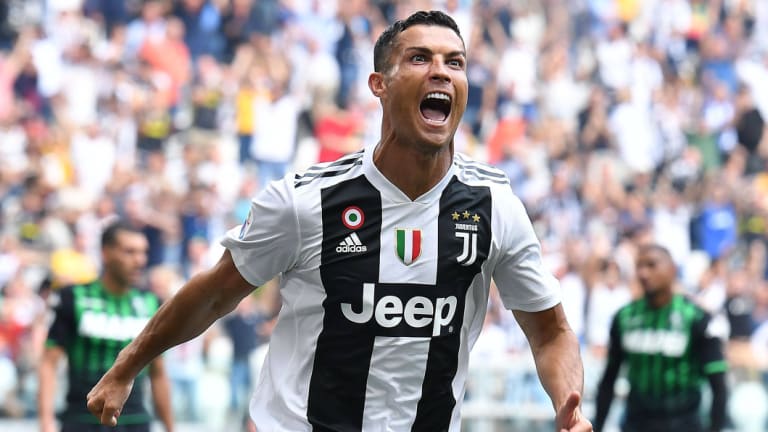 Relief: Cristiano Ronaldo has opened his Juventus account with a brace.

Khouma Babacar headed one back in the 90th minute but the game ended in ugly scenes as Costa became involved in a running feud with Sassoulo midfielder Federico Di Francesco.

The Brazilian escaped with a booking for elbowing and then head-butting his rival as they tangled before the Sassuolo goal, but was then sent off after cameras caught him spitting at the same player in another altercation.

Juventus, chasing an eighth successive Serie A title, have 12 points, three ahead of Napoli, while Sassuolo are on eight after their first defeat of the season.

"I was a little bit anxious as expectations were high," said Ronaldo. "I really wanted to score, so I'm happy."

Juve coach Massimiliano Allegri's prediction that it would be Ronaldo's day proved to be right.

His luck changed when Sassuolo defender Gian Marco Ferrari headed a corner onto his own post and the rebound left Ronaldo with the easiest of tap-ins.

Sassuolo, who caused Juventus trouble all afternoon, were then caught on the break, with Emre Can sliding the ball to Ronaldo to drill an angled left-foot shot into the far corner.

Ronaldo could easily have had a hat-trick but missed two more good chances and also had a penalty appeal turned down.

After the match, Allegri said Costa faces a fine for his sending off.

"Even if he was fouled, these episodes must not happen," Allegri told reporters. "We mustn't fall for provocation.

"The game was winding down, we had it in the bag and, instead, we stopped playing as a team, everyone wanted to dribble a bit.

"Then the other team gets back into the game, some players get irritated and that sort of thing happens. The only thing we have to avoid doing this year is rising to the provocation.

"It's only right that he (Costa) is fined and he certainly will be ... I was surprised by his reaction.

"We have suffered a goal, a red card and a suspension which will be long."

Elsewhere, Roma were left with only five points from four games after another unhappy afternoon. 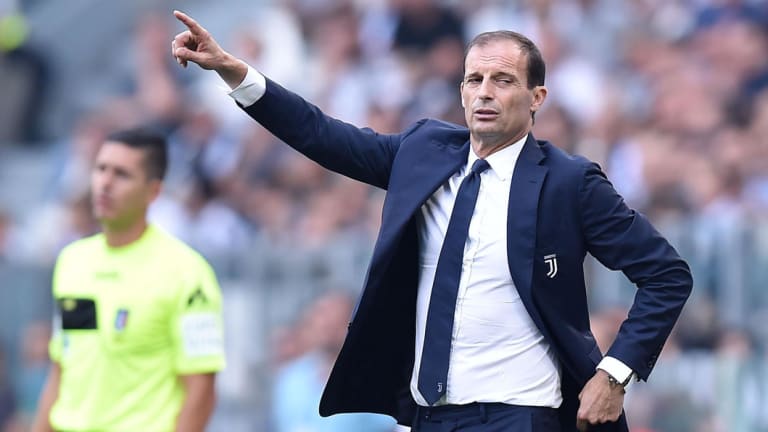 Stephan El Shaarawy and Bryan Cristante put them 2-0 ahead in under half an hour, but Chievo hit back after the break as Valter Birsa curled in a delightful effort and Mariusz Stepinski levelled with seven minutes left.

Winless Chievo are on minus one point after having three deducted on Thursday by the Italian federation over accounting irregularities.

A second-half goal by Krzysztof Piatek gave Genoa a 1-0 win over Bologna in another match marred by ugly scenes after the visitors had Erick Pulgar sent off for a shocking tackle on Romulo, sparking a scuffle involving a number of players.

Torino midfielder Soualiho Meite was hero and villain in his team's 1-1 draw at Udinese. His mistake led to Rodrigo de Paul's opener for Udinese, but the Frenchman made amends with the equaliser after halftime.

Dani Alves on Ramos' foul: Real Madrid have taught us to do more than we are used to
Barcelona played the best match at Setien. Even Griezmann scored: a perfect parachute after a heel pass from Messi
Arsenal have nothing to celebrate, they have to take every opportunity. Mourinho responded to the gunners' joke about Tottenham
Kike Of Setian: I understand less and less VAR
MATIC has extended his contract with Manchester United until 2023
With the death of Morricone, part of the world's cinema goes. De Laurentiis on the composer
Josep Bartomeu: Setien is doing a great job. We have full confidence in him
Source https://www.theage.com.au/sport/soccer/ronaldo-finally-off-the-mark-costa-dismissed-for-spitting-20180917-p5045u.html?ref=rss&utm_medium=rss&utm_source=rss_feed