The Western Bulldogs have again lost patience with Josh Schache, dropping him after a two-disposal showing against Carlton last Sunday night.

Premiership player Toby McLean is also on the outer once more, with the Dogs making four unforced changes for Friday night's date with Essendon at Metricon Stadium. 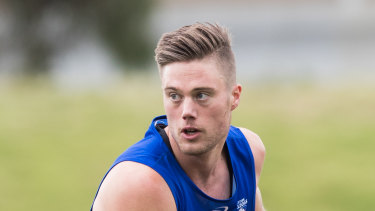 McLean, Rhylee West, Louis Butler and tall forward Schache - the No.2 draft pick from 2015 - have all been dropped. Hayden Crozier is back after serving his one-match suspension, while Matt Suckling and Lachie Young have been recalled. November draftee Cody Weightman has as expected been named for his AFL debut.

The Dons have made two changes from the side that beat North Melbourne. Ned Cahill comes in for his debut, while Mason Redman has earned a recall. Martin Gleeson is being managed while Dylan Shiel is serving the first match of his two-game ban for rough conduct.

Premiership favourites Greater Western Sydney have made three changes following last weekend's loss to Port Adelaide. Tom Green is among the omissions, less than three weeks after earning a Rising Star award nomination. Jackson Hately has also been dropped while Callan Ward is out with a knee issue.

But in welcome news for GWS, reigning best and fairest Tim Taranto is back for his first game of the season following shoulder surgery. Jye Caldwell and Zac Langdon have also been included for Saturday's meeting with the Brisbane Lions at Giants Stadium. The Lions are unchanged.

Hawthorn have named ex-St Kilda forward Darren Minchington in their squad for Sunday's game against Melbourne, who have included ex-captain Nathan Jones in their group of 26 for the clash.

Elsewhere Fremantle have lost dual Brownlow Medallist Nat Fyfe to a hamstring complaint for Sunday's Western Derby and Sydney have named small forward Elijah Taylor to debut against Gold Coast at the SCG on Saturday. Off-season recruit Sam Gray has been dropped as part of four changes for the lowly Swans.

Detailed analysis of the game of 18-year-old Ronaldo for sporting against Manchester United. 6 days later, Cristiano became a United player
Manchester City are confident that Aguero will stay for another season, despite the Interest of Independiente
Willian agreed a 3-year contract with Arsenal. Salary-100 thousand pounds a week
Sanchez signed a contract with Inter until 2023. The club signed him for free
Arsenal players are against the dismissal of 55 employees of the club. The team took a pay cut to save the staff
We talked to the football player Tsiskaridze: he ate a dragonfly, knows 7 languages, is in shock from Makhachkala, travels the world and is just happy
David Silva is close to moving to Lazio. The club offered the 34-year-old midfielder a 3-year contract with a salary of 3 million euros per year
Source https://www.theage.com.au/sport/afl/western-bulldog-josh-schache-dumped-again-after-two-disposal-showing-20200716-p55cth.html?ref=rss&utm_medium=rss&utm_source=rss_feed

Kosciuszko hope Fender could be one in a million

Less than half of vocational loans to women would be repaid, research shows