It was 8.15am on August 6, 1945 when a sudden blinding light engulfed the sky above Hiroshima. The bomb released a colossal force of destruction never before seen. A blast wave faster than the speed of sound expanded outwards, creating a massive firestorm, levelling the city and killing tens of thousands of civilians. 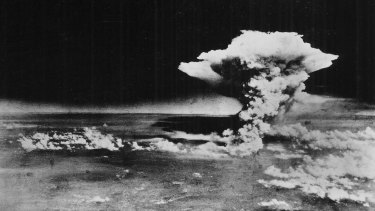 The plume of smoke from a mushroom cloud billow, about an hour after the nuclear bomb was detonated above Hiroshima on August 6, 1945. Credit:US Army via Hiroshima Peace Memorial Museum

Three days later, on August 9, the city of Nagasaki suffered the same fate. Neither city had nearly enough doctors, nurses or medicine to aid all the victims. Before the attack on Hiroshima, the city had 300 doctors. After the blast, only 30 had not been killed or injured. Of the 1780 nurses, 93 per cent were dead or wounded.

On Thursday, 75 years to the day after Hiroshima, the dark shadow of nuclear war still hangs over all of us, despite the horrors those cities suffered. To this day, no city can prepare for an atomic bomb, and no nation can effectively respond to one. Thousands and even millions of civilians would be killed and injured, and no one would be able to help.

The Red Cross and Red Crescent Movement believes it is a humanitarian imperative to ensure that nuclear weapons are never used again. What we cannot prepare for, we must prevent.

Many survivors of the Nagasaki blast “died within one to two months because there were no effective treatments, not even antibiotics or blood transfusions, and because the infrastructure was totally destroyed, including hospitals and pharmacies,” said Dr Masao Tomonaga, a former director of the Japanese Red Cross Nagasaki Atomic Bomb Hospital, whose mother pulled him out of the rubble of their wooden home after the Nagasaki detonation.

In the months and years that followed,tens of thousands of citizens of Hiroshima and Nagasaki suffered and died from cancers and other illnesses caused by exposure to radiation released by the atomic blasts.

The two nuclear bombs were uniquely horrific and terrifying weapons of war. The International Committee of the Red Cross and the Japanese Red Cross Society witnessed first-hand the suffering and devastation as they attempted in near-impossible conditions to help the dying and injured. The testimonies of survivors and first responders paint a chilling picture of unimaginable pain, senseless loss and courage.

Marcel Junod, of the ICRC, was the first foreign doctor to reach Hiroshima, one month later. “The centre of the city was sort of a white patch, flattened and smooth like the palm of a hand,” he wrote. “Nothing remained. The slightest trace of houses seemed to have disappeared.” 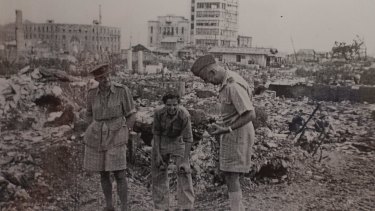 Yet, far too little has been done to ensure that nuclear weapons are never used again. In fact, a disturbing record of close calls shows that we have been extremely lucky that nuclear weapons have not been used in armed conflict since 1945. We cannot expect that luck to hold forever.

There are more than 13,000 nuclear weapons in the world, many on "hair trigger" alert status, ready to be launched at a moment’s notice. The risk that nuclear weapons may be used again is growing to alarming levels. The nuclear-armed states are developing new nuclear weapons and making it easier to use them. And treaties to reduce the numbers of nuclear weapons and the risks of their proliferation are being abandoned.

As a result, the world finds itself on a dangerous path towards a new nuclear arms race, threatening the very survival of humanity. This is a reality we cannot accept.

The International Red Cross and Red Crescent Movement was created to alleviate suffering, protect life and health, and uphold human dignity, especially during armed conflict and other emergencies. Use of nuclear weapons has the potential to render impossible the humanitarian mission our movement exists to fulfil. We know today that any nuclear blast would cause insurmountable challenges for humanitarian assistance. Adequate assistance does not exist at national or international levels. Who, then, will assist the victims of nuclear weapons, and how?

Our inability to answer this question means the only responsible course of action is prevention.

Less than a month after the atomic bombings of Hiroshima and Nagasaki, the ICRC was already questioning the lawfulness of nuclear weapons, appealing to states to ban their use: “Only a unified world policy can save the world from destruction,” Dr Junod wrote.

Three-quarters of a century later, we must be clear: we have waited long enough. Too often, the international community has been unable to prevent foreseeable crises. We still have a chance to prevent a global nuclear catastrophe. Our children and future generations should not have to bear the burden of our inaction.

Pep Guardiola: no one cares about the players. There were 2 weeks of pre-season, and now matches every 3 days, and so 11 months
Akanji about 0:2 from Augsburg: Borussia showed too little in attack and defense
Hummels 0:2 in Augsburg: Borussia played well in many aspects, but did not create enough chances
Schalke have not won the Bundesliga in 18 consecutive rounds. The total score of the first two games of the season is 1:11
Real won with the help of VAR and decommissioned forwards. Jovic earned a penalty, mayoral a penalty
Robles on refereeing the match with Real Madrid and VAR: dubious episodes are always Interpreted in favor of top clubs
Conte on 4:3 with Fiorentina: impressed with Inter's attack. We didn't have enough balance, we paid for it
Source https://www.smh.com.au/national/seventy-five-years-after-hiroshima-nuclear-catastrophe-remains-a-threat-and-no-one-could-help-20200805-p55ipj.html?ref=rss&utm_medium=rss&utm_source=rss_feed