Champion jockey Glen Boss has sounded a Melbourne Cup warning to his rival jockeys and the fellow Cups contenders after Sir Dragonet showcased his class in Saturday's group 1 Cox Plate.

The 51-year-old was $150,000 richer after claiming five per cent of the $3 million top prize in Saturday's weight-for-age championship, minus $2000 after he was fined for celebrating prior to the post and breaching COVID protocols for hugging stable staff following Sir Dragonet's dominant victory. 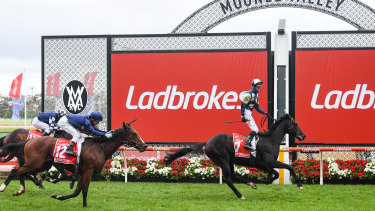 But there's more to come from the Ciaron Maher and David Eustace-trained import, according to Boss, who was the last rider to win the Cox Plate and Melbourne Cup double in the one season on board champion Makybe Diva in 2005. The victory was Boss' fourth in a Cox Plate.

"The best part of his race was the last 100 metres, he was still getting quicker at the line," Boss said.

Maher declared the victory the biggest moment in his training career, among the Caulfield Cup victory with Jameka.

But while he'll celebrate the victory over the weekend, Sir Dragonet's Melbourne Cup preparations have already begun.

"He'll be at the beach in the morning, our vets will go over him this evening, cross the Is and dot the Ts," Maher said after Saturday's race.

"It's already started. That was the main race they bought the horse for, the Melbourne Cup, so as far as I'm concerned the job's only half done."

Third-placed favourite Russian Camelot wouldn't have lost any admirers after his gallant run and trainer Danny O'Brien said he would press on towards the Melbourne Cup with the colt if he pulled up well.

"We're really proud of him," O'Brien said of him.

"He had to go forward on what was a pretty hot tempo. Damien gave him a superb ride from that gate.

"All you can ask is that the horse gives his best, albeit he hasn't won today, that was probably his best performance.

"We've always thought we would go to the Melbourne Cup provided we were happy. He's run out of his skin again today so we'll see in the next 10 days but at this stage you'll see him at Flemington on Tuesday week."

Arcadia Queen knuckled at the 1200-metre mark but found her feet again, only to dash into fifth place, while Aidan O'Brien's Armory overcame a health scare during the week to finish second to his former stablemate.

Mugatoo was brilliant rounding out the top four, while Fierce Impact and Probabeel weren't beaten far.

Of the others, three-year-old Grandslam finished last after leading at an unsustainable tempo, Kolding failed in the Melbourne direction once again and Aspetar never felt comfortable on the soft track.

Armory looks likely to run again in the Mackinnon Stakes on the last day of the Melbourne Cup carnival providing all is well with the horse.

Meanwhile, Brett Prebble has been rubbed out for 20 meetings for improper riding and 12 meetings for careless riding, to be served concurrently for his ride on Lunar Fox in race six.

Laporta on Messi's future: This is Barca's priority. I don't think Leo only cares about money. All the clubs in the world want to get it
The first conference League final will be held in Tirana on 25 may 2022
Spain will play Italy and France will play Belgium in the Nations League play-offs. The final tournament will be held in Milan and Turin
Solskjaer about Fred: He was lucky to stay on the field in the 1st half. His second yellow is not a foul
Real can fire Zidane if the club loses to Gladbach in the Champions League (COPE)
Barcelona will not pay players' salaries for January
Ramos is leaning towards leaving Real Madrid (Onda Cero)
Source https://www.theage.com.au/sport/racing/sir-dragonet-delivers-in-the-cox-plate-20201024-p56888.html?ref=rss&utm_medium=rss&utm_source=rss_feed

Two-year ban to a month: Naden could be first athlete in world to use new WADA code

Race-by-race tips and preview for Kensington on Friday

'No strategy': Drug possession compromise on the table to end bitter cabinet division

Volunteering is in a slump - it's time for some caremongering

Your Daily Horoscope for Friday, December 4

When family gets in the way of work

From the Archives, 1975: Hysteria as Bay City Rollers play Sydney

A not-so happy ending from Monument for porn-star pair

Our decision not to upset an aggressive ally

Ditch the wishlist and bring back the spontaneity of gift-giving

Call of the wild

Abolishing the law against public drunkenness is an important step

'Not a way to live': Scientists brace for bleak Christmas as COVID cash crunch hits research

Premier oversaw fund that set aside $5.5m for project pushed by Maguire