St Kilda's emergence as genuine finals contenders has continued, after easing past a hapless Carlton at Marvel Stadium.

In a game style which was once seen a decade ago at Carlton under then coach Brett Ratten, the fast and dynamic Saints proved far too hot for their older opponents. 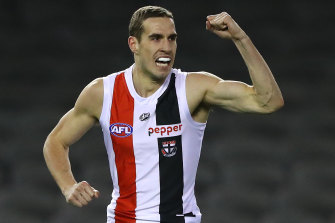 Max King kicks a goal for the Saints.Credit:Getty Images

Thirteen of Carlton's starting 22 were 25 or older, compared to St Kilda's seven and the younger side proved far too quick for the Blues.

The game nearly didn't go ahead and had to pass a late test by health authorities after a security guard tested positive to COVID-19.

And Carlton started the game as if it had been postponed, allowing the Saints to break the lines at ease, just as they did last week against reigning premiers Richmond.

It was one of the unlikeliest of sources that got them going, with captain Jarryn Geary kicking two goals in the opening term in a defensive role on Carlton counterpart Sam Docherty.

Clearly reacting to Docherty's near best-on-ground performance against Essendon last Saturday night, Ratten sent Geary – who was returning from injury – straight to the All-Australian defender at the first bounce.

And not only did he quell Docherty's influence, he kicked two important majors to kick-start his side.

Geary had only kicked multiple goals once in his previous 190 games. He now had two in a term.

The Saints held a 20-point lead at quarter-time after strong starts from young keys Josh Battle and Max King, the latter of which had an intriguing contest with the in-form Jacob Weitering.

It only got better for the Saints in the second term and much worse for Carlton.

Jade Gresham – unsighted in the first stanza – kicked a goal inside 30 seconds and a King mark and goal had the margin suddenly beyond five goals.

Carlton held their opponents to a five-goal lead going into half time – a flattering scoreboard for David Teague's team.

And the Carlton coach had significant problems at the main break. They had been inside 50 just 14 times and 13 players hadn't laid a tackle.

It was a familiar position for the navy Blues, who had been smashed in first halves against Richmond and Melbourne this season.

Adding to Carlton's woes were the successful tagging jobs being performed on their co-captains.

Docherty was having to worry about Geary while Cripps had been well beaten by Jack Steele – who has locked horns with Cripps before.

Teague attempted to change both of those situations.

Docherty was moved to a wing – a position he has almost never been seen before in Carlton colours – and Cripps was sent forward.

The Blues edged back into the contest and it was another unlikely source who did the damage on the scoreboard.

Inside midfielder Will Setterfield – who has made an indifferent start to his Carlton career – kicked back-to-back goals to get the margin back to three goals.

Like Geary, Setterfield too had only kicked multiple goals one other time in his (much shorter) career.

Josh Battle should've made it 29 points at three-quarter-time but bizarrely missed everything from 25 metres out after the siren.

The contest was much more even in the final term, but the damage had been done.

St Kilda were far and beyond the better side when it mattered and a win on the night had them knocking on the door of the top four.

A LONG WAY UP
While a lot of the fanfare surrounding St Kilda has been around the new recruits, Ben Long's rise has gone relatively under the radar.

But there was nowhere to hide when he leapt on the shoulders of teammate Nick Coffield to take an early contender for mark of the year.

Although the big grabs are far sexier in front of goal, it was fitting that Long's mark came across half-back – a position he is quickly making his own for the Saints.

HAMSTRING FOR HANNEBERY
Dan Hannebery can't take a trick at his second club.

After a torturous injury-riddled start to his St Kilda career last year, the veteran midfielder had been making a steady return towards his best in 2020.

Not only was his famous running capacity beginning to creep back into his game, but his kamikaze effort going back with the flight against Kade Simpson in the first quarter drew shades of his 2012 grand final mark for Sydney against Hawthorn.

But his night was over midway through the third when he clutched at his right hamstring and was quickly ruled out of the game.

He faces another stint on the sidelines.

Sam McClure is a sport reporter for The Age and winner of 'best news reporter' at the AFL Media Association awards.

Spartak is going to withdraw from the RPL because of the refereeing – your reaction?
There are 2 cases of coronavirus in Atletico. The match with Leipzig – August 13
Renzo Ulivieri: Pirlo is one of the most profound thinkers of world football. He knows more than most coaches
Pirlo wants to sign Tonali at Juve. Alternative – Locatelli
Before the match with Real Madrid, sterling watched a video of the defeat by Tottenham in the 2018/19 Champions League
Andrea Pirlo: I am Flattered to have received such respect and trust from Juventus
Former Manchester United midfielder angel Gomez has moved to Lille. He will spend the season on loan in Boavista
Source https://www.smh.com.au/sport/afl/slick-saints-run-all-over-carlton-20200702-p558kh.html?ref=rss&utm_medium=rss&utm_source=rss_feed