Each week, Benjamin Law asks public figures to discuss the subjects we're told to keep private by getting them to roll a die. The numbers they land on are the topics they're given. This week, he talks to Nat. The mid-30s Sydney comedian has run his “Nat’s What I Reckon” YouTube channel for a decade. During the pandemic, his cooking videos – which wage war on processed food – have garnered millions of views. 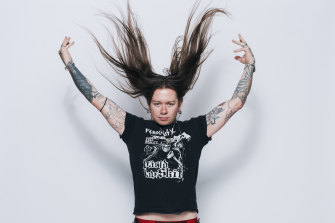 Nat: "Little moments of feeling capable in your day, when your whole f…ing world’s collapsing on your head, are important."Credit:James Brickwood

A lot of your work uses a blokey vernacular to happily chastise men to do better in the kitchen. To what extent are you helping to reshape ideas of what being a man can be? I don’t try to target my videos at any gender whatsoever. If I’m helping young men cook, or get in the kitchen, fantastic. But for me, there’s no target specifically towards men. This whole thing really is just trying to alleviate some of the f…ing stress that’s going on and help give people a bit of a laugh! [Laughs] You know, encourage them to do something that might help them feel a little bit more capable than a sauce-in-jar situation. Little moments of feeling capable in your day, when your whole f…ing world’s collapsing on your head, are important.

Most of your work in 2020 has been online because of the pandemic. Being online can be an intense place, given how politically divided people are. How do you navigate online arguments? You’ve gotta remember the name of the game is to make people laugh. I take gentle stabs at things I think are f…ing stupid or over the top. One post that comes to mind was about when I went to the Women’s March. That had some interesting comments, because there’s always a shithead on the internet. [Laughs]. So usually, if someone’s trying to be a bit of a drama farmer on my page, I’ll either delete their comment, or I’ll just block them if they’re being an arsehole. If someone’s being super arrogant, it’s very rare I’ll bite back at them. But if you’re gonna be a dickhead, I’ll just block ya.

You’ve got a huge global following and people look up to you. If you were to run for political office, what issues would be part of your platform? To stop people like me entering politics. [Laughs]

You travelled in India as a teenager, came home with tuberculosis that lay dormant for several years, then your health rapidly deteriorated in your 20s. How serious did things get? Pretty serious. My body was wasting pretty hard at one stage. My symptoms were of a glandular fever nature, but often that test can come back in a grey area, and it kept coming back in that grey area for me. I had chronic fatigue, was vomiting a lot and losing a lot of weight. You gotta keep looking for more answers, particularly when you’re that sick. I’m glad I found them. Scary.

When did doctors say you needed a lung removed? It’s a serious disease, tuberculosis. Thankfully, I did get on top of it, but a few years after I’d been cleared, I was having symptoms of something unpleasant in my lungs, and I ended up developing a big cyst in one. It collapsed and I had to have that removed in 2010. So that was another drama! [Laughs] But since then it’s been great. Well, not great. But I’m in better shape than I’ve been since I was a teenager.

What can and can’t you do now? Well, I can’t smoke. [Laughs] My doctor says I can’t scuba dive and I can’t run a marathon. Only one of those really bothers me. My sister is a scuba diving instructor, so I’d like to do that. But that’s about it. I feel hugely capable.

How has that near-death experience affected you? It’s totally f…ed my head up. I have really chronic mental health problems. I’ve got bad medical anxiety, which is quite exhausting. I find going to the doctor quite traumatic. And I’ve always been scared of death, because I grew up in a church [Hillsong] that tells you that if you die – and you don’t have your f…ing shit in order – then you’re going to hell. So that’s carried on into this sick stuff and compiled into an almighty headache that’s pretty constant. But look, if anything, it’s also encouraged me to get back to the gym.

You’re known for your cooking. What would you want your last meal to be? Hmmm. [Thinks] My brain’s going cheeky and saying Sultana Bran. [Laughs] Fruit Loops!

Not a bad answer. No, I think it would be a meal my dad made. Anything he cooks is f…ing unbelievable.

[Laughs] I suppose so. I’ve got a fairly low regard for myself, so that stuff doesn’t tend to stick. I find it a little overwhelming. People suggest all sorts of things they want to do to you, but you don’t reply to that stuff. Since having [partner] Jules on camera and part of the channel, that’s slowed that stuff up a bit.

She’s your shield. [Laughs] Yes! It’s weird; I’m not looking for that shit.

But it goes looking for you, obviously. Yeah! But I don’t really get it. I get marriage proposals a lot, and we just laugh. It’s like Married at First Sight – a f…ing bad idea.

You’ve said you enjoy smashing gender normatives as part of your work. What makes a good man? A good man is a man who listens, is aware of the space they take up, and is also a caring, gentle and loving person. I don’t think masculinity makes a good man. Being kind makes a good man.

Nat’s book, Un-Cook Yourself: A Ratbag’s Rules for Life (Ebury Australia, $33) is out December 1.

The Eintracht captain ended his career in the middle of the season for his son. He said goodbye to football by exchanging T-shirts with the referee
Frank Lampard: Leicester are in the RPL championship race. I don't want to say whether Chelsea are involved or not
Mancini on Pirlo: Difficulties at first - it's normal, even if you played at the top level
Phil Neville took over Inter Beckham
Jose Mourinho: You can buy one of the best defenders in Europe for 70 million, or you can take someone who needs development
Ex-Arsenal midfielder Wilshere has signed a contract with Bournemouth
Ole Gunnar Solskjaer: Pogba played superbly against Liverpool. Manchester United manager Ole Gunnar Solskjaer commented on the performance of midfielder Paul Pogba in the match of the 19th round of the Premier League with Liverpool
Source https://www.smh.com.au/lifestyle/life-and-relationships/smashing-gender-norms-nat-s-what-i-reckon-does-it-one-cooking-video-at-a-time-20201015-p565ij.html?ref=rss&utm_medium=rss&utm_source=rss_lifestyle