Snap Shot is a weekly column taking a look at the lighter side of football.

We know there is no game without the umpires and in round 17 that axiom nearly found an example to substantiate the saying when long-serving field umpire Brett Rosebury hurt his back in the warm-up before Carlton played Adelaide at Metricon Stadium.

With no emergency umpires, the farewell to Adelaide's Bryce Gibbs was looking decidedly shaky as umpires coach Hayden Kennedy swung into action on the phone from his quarantine base with a simple question to the umpires staying in Broadbeach: Is anyone close enough to get to the game in time? 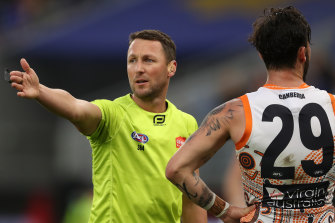 Brett Rosebury was a late out before Carlton's clash with Adelaide.Credit:Getty Images

Young umpire Hayden Gavine – who is a chef by occupation – jumped into the frying pan, answering Kennedy's call and arriving at Metricon Stadium with just 10 minutes remaining before the first bounce.

Gavine got through the match without controversy and Gibbs was chaired off the ground at the time expected, those undertaking the thankless task of umpiring saving the game again in 2020.

Coleman medallist Tom Hawkins' goalscoring strike rate has remained on track in 2020 despite shorter quarters. The big Cat kicked 42 goals in the 18-round home-and-away season this year, exactly the same tally he had after 18 rounds in 2019 and one more than he had kicked after round 18, 2018.

But he has bucked the trend with 16-minute quarters, reduced breaks between games and compromised training meaning the game is on world-record pace for goalless quarters in 2020.

In 2020 there have been 145 quarters where at least one of the teams has gone siren to siren without kicking a goal. West Coast managed a scoreless opening quarter against North Melbourne last week, for the first time since 1998.

Geelong, for their part, have had just six goalless quarters in 2020.

What it does mean is that it is going to be tough for statisticians to reconcile this season in the future given the variables. But don't be fooled: scoring remains harder than it has ever been in 2020.

Collingwood's Mason Cox is back grabbing marks but it's fair to say the Pie's form has been hot and cold at times this season.

Well, Snap Shot can trace it back to the first football match Cox attended at GMHBA Stadium as a guest of North Melbourne, before the Magpies signed him when he and his brother, Nolan, who accompanied him to Australia, decided to try out a pie at the footy. 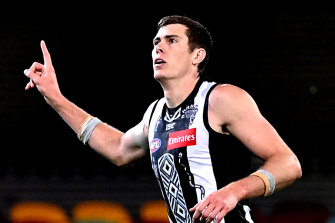 Unfortunately both took their first bite as they were talking to North Melbourne's recruiting officials and the pies were cold. Not knowing that they had been sold a dud they merely thought the Australian staple was disgusting. But they did not know how to react.

Nolan, under less pressure to impress than Mason, decided to hide the half-eaten pie behind his back while Mason kept chewing, gagging each time he took another chomp as his brother silently urged him to get through it.

Not known for giving up, Cox got through the pie but did not sign with the Kangaroos, opting to play in front of big crowds of passionate fans that sweat on his every move, his impression of the Pies surviving his first encounter with the meat variety.

Hans-Dieter flick: I Hope Alaba will sign a contract with Bayern. Our club is one of the best in the world
Diego Maradona: Messi gave Barca everything, brought them to the top. He was not treated the way he deserved
Federico Chiesa: I hope to leave my mark in Juve. We will achieve great results
The Coach Of Benfica: I don't want us to look like the current Barcelona, it has nothing
Guardiola on returning to Barca: I'm happy at Manchester City. I hope to stay here
Fabinho will not play with West ham due to injury
Ronald Koeman: Maradona was the best in his time. Now the best Messi
Source https://www.smh.com.au/sport/afl/snap-shot-off-the-beach-grab-your-whistle-and-get-here-now-20200922-p55xxi.html?ref=rss&utm_medium=rss&utm_source=rss_feed