One of the biggest infrastructure investors in the country is lobbying the government to divide major job-creating projects into smaller contracts to help Australian businesses compete for infrastructure contracts typically won by global construction giants. 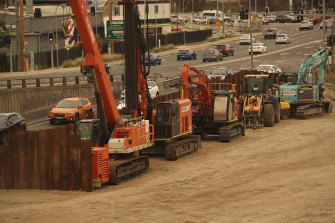 IFM and the 27 industry super funds that own the fund manager are multi-year investors and reluctant to invest in "mega-projects" under the current terms, which Mr Neal, the former Future Fund chief, said benefits construction giants typically from overseas who want to move onto other projects as soon as the build is complete.

"We're building these Australian projects and it's Australian constructors that are getting squeezed out," Mr Neal said.

Instead, he wants major developments broken up into smaller projects and the opportunity for equity partners to enter long-term arrangements with the government in a proposal he describes as being "four wins" for the economy, jobs, super fund members and local companies.

"We look at this misalignment of short-term constructor-focused model with what we're trying to achieve, which is long-term, productive, economy-building projects and think there must be a better way." 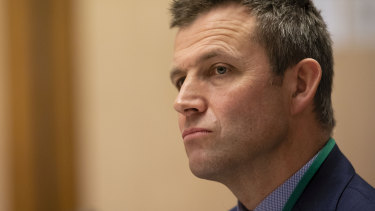 A short-term focus on big taxpayer-funded projects can lead to poor outcomes for the public with unexpected complications, cost blow-outs and delays, he said.

Data from the Australian Bureau of Statistics released on Thursday showed almost 1 million people out of work and the worst jobless figure in over two decades due to the shock of business shutdowns from the coronavirus pandemic.

Treasurer Josh Frydenberg encouraged super funds in June to invest in big developments and do more to help the recovery.

However, a multi-billion dollar bid from a private consortium including IFM to build Melbourne's airport rail link is expected to be rejected by the Victorian and federal governments in favour of a cheaper option.

Despite this, Mr Neal said there had been "lots of interest" across state and federal governments about IFM's suggested changes to the procurement rules. IFM manages about $150 billion, including $70 billion in infrastructure.

"We're trying to bring a constructive suggestion that says [to the government] you've got a lot on your plate and lots of people asking for your money," Mr Neal said.

"We're not asking for your money, we're asking for the opportunity to contribute superannuants' money. There are billions here that are ready to be deployed to support nation-building projects," he said.

"Bring the projects forward with the right procurement model and we'll engage keenly."

Industry Super Australia chairman Greg Combet, who is also the chairman of IFM, recently accused Liberal MPs of being "hugely disruptive" and trying to undermine the super system following revelations of a backbencher push to delay the legislated superannuation increase. He has warned a $19.5 billion plan from IFM and Industry Super Property Trust to spend on infrastructure and property, creating 200,000 jobs, could be derailed by major policy changes.

Mr Neal is also concerned about the future stability of the superannuation industry, with a landmark report analysing the retirement system including super and the pension due to Treasury on July 24.

"Superannuation is a long-term savings vehicle. I think stability to the policy environment for anything that's long-term in its nature is critical," he said.

"It's very hard to develop long-term investment strategies if there are sudden, unexpected changes."

The Bayern coach who destroyed Barca. He was on Lev's staff at 7:1 in Brazil
Barcelona offered Pochettino a 1+1 contract. The club is in contact with Allegri and Henri
Call me Neptune. Ronaldo dived to a depth of 14 meters
Abidal may be dismissed from Barca after Setien. He supports the coach even after 2:8 from Bayern
The city has finally raised a star of its own. Pep calls foden the main talent of his life and is looking for an optimal position for Him
Emre belezoglu finished his career at the age of 39
Barcelona has spent almost a billion euros on transfers over 5 years. That's who the money went to
Source https://www.theage.com.au/politics/federal/squeezed-out-ifm-boss-wants-changes-to-help-local-companies-win-infrastructure-contracts-20200716-p55ck2.html?ref=rss&utm_medium=rss&utm_source=rss_feed

Faith column: Tea for two has kept our marriage strong for 40 years

Decades on, Alison extracted a confession from her gymnastics coach

For all icare: Perrottet blind to ethical failings

Nikki Webster 20 years on: How the opening ceremony changed everything

A battle for the nation's memory fought over Australian War Memorial

'On par with North Korea': Three out of four requests to leave Australia refused

Tap 'n' go for funerals a sign of shifting norms

'Go topless': As household waste soars, here's what you can do

Enter, the mud flap: The mullet is making a comeback

Murdoch empire will continue its reign under Lachlan

'I'm just trying to get on with it': Tim Minchin on taking the good with the bad

'It should never have come to this': Punched for rebuking racism, a young player takes Football NSW to court

Pregnant MPs warn they are being shut out of inflexible Parliament

Gritty Reds too tough for Rebels

COVID lessons from the survivors of other horrors

Aren't we supposed to all be in this together?

Burgoyne's chance to go out in Silky style

Mum kicked out of daughter’s wedding