Staggs sends an injury scare through the Blues

NSW newcomer Kotoni Staggs has sent a scare through Blues camp after dislocating a finger during a tackling drill at training on Thursday.

Staggs was seen racing to the sideline in pain before being treated by team doctor Nathan Gibbs.

The Brisbane star returned to the field with his left index finger and middle finger heavily strapped.

Staggs later told the Herald he started to worry when he was unable to popped his index finger back into place himself.

“We were doing some short-side defence and I went to tackle ‘Teddy’ [James Tedesco] out the back, my finger was in the wrong place and it popped out,” Staggs said.

“It’s pretty sore when it pops out. I tried popping it in myself, but I had to go and see the doc. He got it in after a couple of tries. It will probably swell up a bit. I’ve popped the pinky a few times, but never this finger. 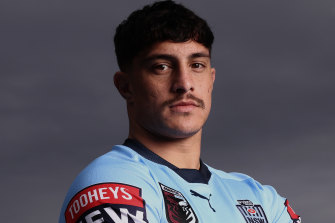 “If you’re not used to strapping two fingers together, it can get annoying, but I was sweet to go back out and finished the session.”

Gibbs said while dislocated fingers would be painful for most members of the general public, they happened in almost every second NRL game, and often players would try to take care of the injury themselves.

“There was no tendon damage or fractures with Kotoni, we strapped him up and he was straight back out there,” Gibbs said.

“The big risk is not so much the finger popping out again, it’s the knuckle stiffening up and [potentially] losing your range of movement over the next four to six weeks.” 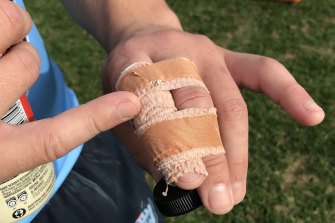 Staggs said he was feeling strong within himself after enjoying an injury-free year and playing every game for Brisbane.

He also felt comfortable stationed next to Daniel Tupou, the experienced towering winger he has already played alongside for Tonga.

Meanwhile, Gibbs said the heavy strapping on the left knee of winger Brian To’o was more for “peace of mind” rather than any concerns over the same injury that kept the pint-sized Panther out of action for six weeks earlier this season.

The Blues will train at Coogee on Friday morning before breaking camp and returning on Sunday ahead of next Wednesday’s series opener at Accor Stadium.

Watch the State of Origin exclusively live and free on Channel 9 and 9Now.