Australia will face a heaving Khettarama Stadium in Colombo tonight without Mitchell Starc, after a freakish hand injury during the tourists’ resounding victory in the opening Twenty20 match against Sri Lanka.

Starc somehow managed to cut the index finger on his bowling hand with a spike from his bowling boot, the digit colliding with the left-armer’s foot in follow through from a delivery.

Able to complete his spell with tape, Starc won’t be able to resort to similar measures for game two, meaning he will sit out until the cut has been fastened by glue or stitches. Starc’s mishap was just about the only blip in an otherwise powerful Australian performance.

While a capacity crowd cavorted under lights, after Sri Lanka Cricket announced all money from ticket sales would go to economic relief for the worst-hit members of the population in a time of political and financial turmoil, Aaron Finch’s team put together a performance befitting world champions.

From 1-100 with 50 balls remaining, Sri Lanka plummeted to 128 all out through the suffocating pressure imposed by Josh Hazlewood (4-16), reborn as a T20 maestro and now the second-ranked Australian cricketer after Test captain Pat Cummins.

Hazlewood had plenty of help from Starc (3-26), Ashton Agar and a fielding display that saw every chance held and two runouts conjured. 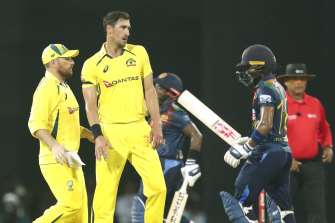 Australian bowler Mitchell Starc has picked up a finger injury.Credit:AP

Faced with a modest pursuit, Finch (61 off 40 balls) demonstrated a welcome return to something like his best rhythm, hunting boundaries in the company of the stupendously busy David Warner (70, 44 balls) in a partnership that gobbled up the target with maximum efficiency.

“For Finchy it’s about keeping it simple and not moving too much around the crease, and I think we saw that tonight,” Warner said. “He played some nice shots, he timed the ball well, and that’s when he’s at his best when he’s nice and still.

“He looked to hit down the ground, which is his area, he slog sweeps which he’s very good at. I said to him [via text during the IPL] not to walk out into the ball, let the ball do its work in the air. If they want to bowl nice and full, if you stay still and keep that leg stump line, you’re going to get full contact.

“He was probably moving a little too much, walking straight into the line of the ball, and still moving at the time of the delivery. When you’re a batter you don’t really want to do that, you’re physically charging. I kept in touch with him, I always support him as much as we can and if we see little things we try to help each other out.”

Though Hazlewood coaxed out Danushka Gunathilaka, slicing into Marsh’s hands on the boundary early on, Pathm Nissanka and Charith Asalanka sailed into three figures. When Asalanka connected sweetly with Kane Richardson’s second ball and sent it flying into the scoreboard, it seemed the entire stadium was on its feet.

But as a seasoned side with a well-travelled captain in Finch, the tourists knew not to drop back too far, instead working to staunch the run rate with plenty of fielders saving singles. Rewards arrived when Nissanka was fooled by a slightly slower Starc yorker, ushering Hazlewood’s return.

First ball back, his hard length and bounce drew a skier from Kusal Mendis, then three balls later Bhanuka Rajapaksa fiddled uncertainly at a ball angled across him for an edge behind. When the captain Dasun Shanaka was pinned lbw, Hazlewood had three victims in the over and Sri Lanka were sinking fast.

A couple of runouts followed, Steve Smith conjuring the second with a quicksilver direct hit, and Starc collected a couple more wickets for himself as the innings didn’t fade out so much as stopping dead. 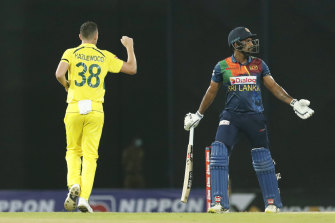 The Colombo crowd, stunned into silence, momentarily found voice again when Maheesh Theekshana’s canny variations appeared to have done for Finch in the opening over. But Finch’s review was to show a thin inside edge, on what was otherwise a very adjacent lbw shout upheld by Kumar Dharmasena.

Warner was quickly into stride at the other end, and when Wanindu Hasaranga - he of a stunning IPL this year - flung down his first over of leg spinners and wrong’uns, the Australians clumped a predatory if not premeditated 19 runs.

Aside from a dropped chance off Warner at 55, the balance of the chase was collected with calm dominance - delayed only by a 50-minute rain break, long after Australia had rushed ahead of the Duckworth Lewis Stern requirement.

It was a display that belied the absences of Adam Zampa and Cummins, and created happy tidings for the coach Andrew McDonald ahead of his delayed arrival after a positive COVID-19 test.